In any historical period, the expansion of new cults and the new texts accompanying them, serve for the commemoration of the past. But such expansion also reflects – whether consciously or unconsciously – the needs of the society at that time. Thus the apparition of new feasts and new saints’ lives and the more active development of the known feasts can shed light on the socio-historical situation of each particular region in a given time.

The best sources providing information on the cults of the saints are the martyrologies and the vitae sanctorum. Calendars, the sanctoral and the litanies of the saints also reveal the ongoing process of hagiographical development.

The starting point for this study was the verification of the local hagiographical additions made in the text of martyrologies copied in Catalan scriptoria from the 10th to the 12th centuries. 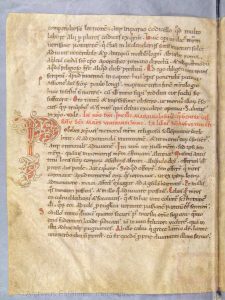 Another well known Carolingian martyrology is the martyrology of Usuard created in 860 and corrected by 877. Usuard reconstructed all the previous versions, including the Ado one. The main difference in Usuard’s work was its shortening of the excessively long eulogies. Its universal and encyclopedic character probably explains the fact that this martyrology survived through several centuries until it served as the basis for the future Roman martyrology.

Due to this fact, it sounds curious that only one copy of the Usuard martyrology is preserved in Post-Carolingian Catalonia. This is the earliest copy of Usuard martyrology in Catalonia. It belongs to the cathedral chapter of Tortosa and is dated the 12th century. Joined together in a volume with the so-called canonical Rule of St. Augustine, it was probably copied under the influence of the Abbey of St. Ruf of Avignon. The diplomata reveal the interaction between the canons of St. Ruf and those of Besalú, in the diocese of Girona, at the end of the 11th century, as well as the foundation of the collegiate churches in other Catalan dioceses which followed. These contacts contributed to the diffusion of the Augustinian Rule that arrived in Tortosa at that time, and were copied with the accompanying Usuard martyrology. The question as to why we have only one early copy of this martyrology remains enigmatic. But the hypothesis that an existing copy of Usuard martyrology was circulating together with the Augustinian Rule in this movement from Southern France through the diocese of Girona could probably explain the existence of later copies of the Usuard martyrology (from the 13th century), preserved in Girona and Tarragona.

This Tortosa martyrology can be distinguished from the others through the number of hagiographical additions (auctaria) which were included in the ‘classical’ version of Carolingian martyrologies. Five Ado martyrologies from cathedral chapter of Vic and Girona and the monastery of Sant Cugat, that have been analyzed, present 71 auctaria including those repeated in different scriptoria and the singular feasts of the saints. From this number, only 11 hagiographical additions belong to all three scriptoria. The martyrology of Usuard from Tortosa provides only 4 auctaria in common with the 11, despite the fact that this is the latest one.

These feasts of the saints allow for a wide range of hypotheses explaining their addition to the Catalan martyrologies. Due to their place in the margins of the manuscript, they were consciously added after the text had been transcribed. Was this linked to the arrival of new relics? Or to the consecration of new altars, chapels or churches in the diocese? Or was this a liturgical necessity that can be explained by the development of new dates for feasts in the Universal Church? 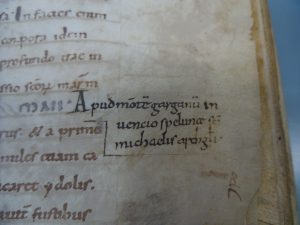 Some of these feasts bear witness to the evolution of their new dates as they spread throughout the Post-Carolingian World. That is the case with the feast of the Archangel Michael that passed through different Western regions and became a common European religious and spiritual phenomenon from the end of the 8th century. Between 981 and 1032, several groups undertaking a pilgrimage are attested from Catalonia to Rome and to the Monte Gargano. The multiplication of churches and altars dedicated to the Archangel (starting from the Abbey of Saint-Michel-de-Cuxa) also manifests a growing significance accorded to the cult of St. Michael in Catalonia. In parallel, the theme of the Archangel flourished in the Catalan iconography.

Comparing the added dates of the Catalan martyrologies with Spanish calendars, only few feasts can be viewed as parallel (e.g. the 27 July added in for Felix of Nola). This very weak connection with the Spanish Passionary suggests other sources for the copy activity in the Catalan scriptoria.

Such hagiographical shifts or rather the complementary development of certain cults seem to connect the Catalan religious communities more to the French and Italian scriptoria than to the Spanish ones (such as those in Castilia, León or Asturia).

Though we are far from defining all the meanings of the added saints into the text of the martyrologies, it is becoming increasingly clear that they were characteristic of the Post-Carolingian world. The new feasts together with some hagiographical extracts reflect the intensive copying of texts and manuscripts. They also bear witness to inter-monastic and inter-canonical communication, whose main centres seem to have been Italian (Rome, Monte Cassino) and French (Avignon, Gellone, Narbonne, Moissac) scriptoria on the one hand, and Catalan monasteries and chapters on the other. The development of the new feasts of the saints may also be explained through the political situation (Archangel Michael as defender of Christian communities against the foreign invasions of the 10th century) and through the reformation in religious life (such as St. Alexis establishing a new model of social, charitable and religious behaviour), thus highlighting tensions and new trends in Post-Carolingian society.