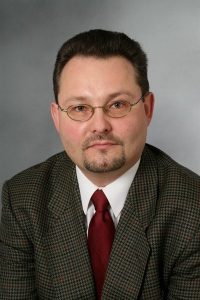 Matthias M. Tischler is an ICREA Research Professor at the Institut d’Estudis Medievals (IEM) of the Universitat Autònoma de Barcelona (UAB). In 1998 he received his PhD in Classics at the University of Heidelberg, and in 2008/2009 he defended his thesis of habilition in Medieval History at the University of Dresden (venia legendi since 2009). Since 2013 he has worked at the UAB and the Austrian Academy of Sciences, Institut für Mittelalterforschung, Vienna, as a Senior Researcher and Research Group Leader. In 2015 he has been a Visiting Professor at the École Pratique des Hautes Études, Paris, and in 2016 a Visiting Research Scholar at the Medieval Institute of the University of Notre Dame, Indiana (USA).

In 2013 he was awarded a two-year Marie Curie Senior Researcher Fellowship of the ERC/M4HUMAN programme of the Gerda Henkel Foundation with a project on Muḥammad in Latin medieval historiography. Since 2016 he is co-directing (together with four partners in Berlin, St Andrews, Exeter and Vienna) the new comparative European HERA-project “After Empire: Using and Not Using the Past in the Crisis of the Carolingian World, c.900‒c.1050” (UNUP) on the role of Carolingian culture in processes of identity building in the peripheries of post-Carolingian Europe, such as medieval Catalonia.

He is founder and editor-in-chief of the Journal of Transcultural Medieval Studies, published by de Gruyter, Berlin e. a. since 2014, as well as co-editor of several international book series. He has published widely in English, French, German, Italian and Spanish in leading medieval journals and book series.

He is interested in comparative transcultural research on religious and historical traditions, and on the plural religious and scholastic cultures and their effects on medieval and modern Europe’s various identities. His recent work deals with the role of Carolingian culture in processes of identity building in the peripheries of post-Carolingian Europe, on the interrelationship between the medieval edition of biblical manuscripts and historical writing in transcultural societies, and on the transfer and transformation of scholasticism in the European centres and peripheries of learning. His research aims at the development of a new master narrative of counteracting collective religious memories in transcultural medieval Europe and beyond, in order to sensitise our present times to Europe‘s social, religious and cultural plurality in a global world order.