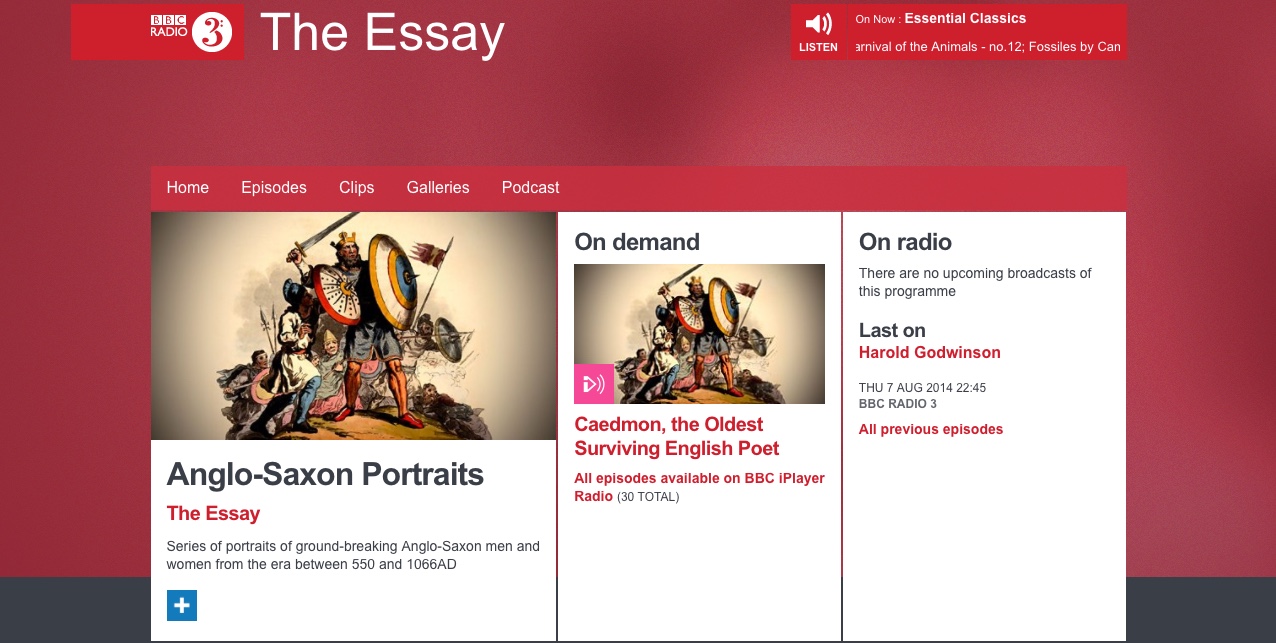 Anglo-Saxon Portraits – A major series of podcasts which rediscovers the Anglo-Saxons through vivid portraits of thirty individuals – women as well as men, famous we well as humble – written and presented by leading historians, archaeologists and enthusiasts in the field.

Reinterpreting the Vikings – Professor Rosamond McKitterick discusses who the Vikings were, whether there was a sharp divide between the Pagan and Christian Viking eras, and the interaction of the Vikings with the Franks, Anglo-Saxons and the Normans.

Footnoting History – a bi-weekly short podcast from a rotating ensemble of history graduates and enthusiasts. Each podcast provides an introduction to an overlooked, unknown or exciting episode from history, with further references for listeners to follow up. The podcasts cover history from the ancient to modern world. Podcasts on medieval history include:

The Papal Pornocracy – When popes are elected today, the cardinals of the Catholic Church meet in secret conclave.  But it wasn’t always so.  In the 9th through 11th centuries, control of the Chair of St. Peter was fiercely contested between several Roman families, who put their sons, brothers, and lovers on the papal throne.  In this episode, we will look at the murders, depositions, adultery, illicit relationships, trials of papal cadavers, and debauched behaviour that allegedly characterised this period, as well as the important role played by two Roman noblewomen – Theodora and Marozia Theophylacti – that led some 19th century historians to label this as a “pornocracy.”

And It Cried ‘Here! Here! Here!’: King Edmund’s Martyrdom by Vikings and the Miraculous Talking Head – In 870 Edmund, the king of East Anglia, was killed by a Viking army. Discover how this event was transformed from a battle between two armies into the story of a Christian martyrdom.

Zombies in Thietmar of Merseburg – Why did commoners and kings in eleventh-century Germany keep seeing dead people? Why did a bunch of animated corpses decide to burn a priest alive? And why did a busy bishop write all this down? 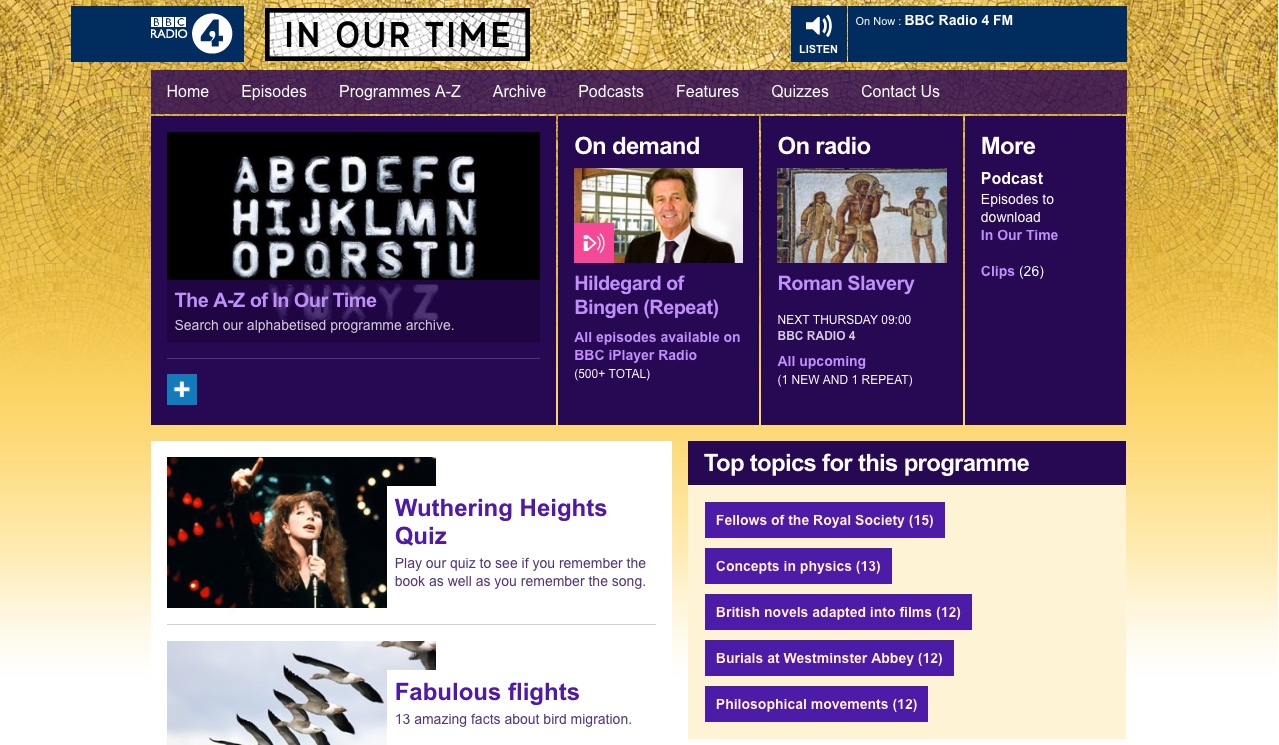 In Our Time – A BBC Radio 4 podcast hosted by Melvyn Bragg, in which historians and other experts discuss a theme or subject for around 45 minutes. A great introduction to topics ranging from King Alfred to the Abbasid Caliphs, and from the Norse Gods to Carolingian culture.

Podcasts on the following subjects include:

The Battle of Tours – In 732 a large Arab army invaded Gaul from northern Spain, and travelled as far north as Poitiers. There they were defeated by Charles Martel, whoseFrankish and Burgundian forces repelled the invaders. The result confirmed the regional supremacy of Charles, who went on to establish a strong Frankish dynasty. The Battle of Tours was the last major incursion of Muslim armies into northern Europe; some historians, including Edward Gibbon, have seen it as the decisive moment that determined that the continent would remain Christian.

The Carolingian Renaissance – In 800 AD on Christmas Day in Rome, Pope Leo III proclaimed Charlemagne Emperor. According to the Frankish historian Einhard, Charlemagne would never have set foot in St Peter’s that day if he had known that the Pope intended to crown him. But Charlemagne accepted his coronation with magnanimity. Regarded as the first of the Holy Roman Emperors, Charlemagne became a touchstone for legitimacy until the institution was brought to an end by Napoleon in 1806. A Frankish King who held more territory in Western Europe than any man since the Roman Emperor, Charlemagne’s lands extended from the Atlantic to Vienna and from Northern Germany to Rome. His reign marked a period of enormous cultural and literary achievement. But at its foundation lay conquest, conversion at the point of a sword and a form of Christianity that was obsessed with sin, discipline and correction. How did Charlemagne become the most powerful man in Western Europe and how did he finance his conquests? Why was he able to draw Europe’s most impressive scholars to his court? How successful was he in his quest to reform his church and educate the clergy? And can the Carolingian period really be called a Renaissance?

Alfred and the Battle of Edington  – At the end of the 9th century the Vikings controlled almost all of what we now call England. Mercia had fallen and its king had fled, Northumbria had fallen and so had Essex. The only independent kingdom left standing against the rampaging Danes was Wessex, and Alfred the Great; then he was overrun, his treasury, palaces and castles taken whilst he and his most loyal followers were left to wander the moors. Yet he came back. The Battle of Edington in 878 is taken by many to be the great founding Battle of England. It is the conflict in which Alfred, King of Wessex, came back to defeat the Vikings and launch a grand project to establish a new entity of Englishness, what he called the ‘Anglecynn’ in the South of the island of Britain.How did Alfred manage to defeat the Vikings when he had been so thoroughly routed? What motivated his project to fashion Englishness? And without Edington, would there be no England?

Æthelstan – Athelstan, the grandson of Alfred the Great, came to the throne of Wessex in 925. A few years later he unified the kingdoms of England, and a decade after that defeated the Scots and styled himself King of all Britain. As well as being a brilliant military commander, Athelstan was a legal reformer whose new laws forever changed the way crime was dealt with in England. Unlike his predecessors, he pursued a foreign policy, seeking alliances with powerful rulers abroad. And unusually for an Anglo-Saxon king, we know what he looked like: he’s the earliest English monarch whose portrait survives.

The Battle of Stamford Bridge – In the first week of 1066 the English king, Edward the Confessor, died. A young nobleman, Harold Godwinson, claimed that Edward had nominated him his successor, and seized the throne. But he was not the only claimant: in France the powerful Duke of Normandy, William, believed that he was the rightful king, and prepared to invade England.As William amassed his forces on the other side of the Channel, however, an army led by the Norwegian king Harald Hardrada invaded from the North Sea. Harold quickly marched north and confronted the Norsemen, whose leaders included his own brother Tostig. The English won an emphatic victory; but barely three weeks later Harold was dead, killed at Hastings, and the Norman Conquest had begun

The Domesday Book – Melvyn Bragg and his guests discuss the Domesday Book, a vast survey of the land and property of much of England and Wales completed in 1086. Twenty years after the Battle of Hastings, William the Conqueror sent officials to most of his new territories to compile a list of land holdings and to gather information about settlements, the people who lived there and even their farm animals. Almost without parallel in European history, the resulting document was of immense importance for many centuries, and remains a central source for medieval historians.

The ‘Norman Yoke’ – Melvyn Bragg and guests discuss ‘the Norman Yoke’ – the idea that the Battle of Hastings sparked years of cruel oppression for the Anglo Saxons by a Norman ruling class. ‘Norman saw on English oak,OnEnglish neck a Norman yoke;Norman spoon in English dish,And England ruled as Normans wish.’Taken from Sir Walter Scott’s novel ‘Ivanhoe’, these words encapsulate the idea of ‘the Norman Yoke’ – that the Battle of Hastings sparked the cruel oppression of Anglo-Saxon liberties by a foreign ruling class. Certainly, William the Conqueror proclaimed his power in great castles and cathedrals, turned the church upside down and even changed the colour of scribal ink. But was it really such a terrible time for the Anglo Saxons or was the idea of beastly Norman oppressors and noble Saxon sufferers invented later to shore up the idea of Englishness?

The Norse Gods – Thor’s huge hammer, the wailing Valkyrie, howling wolves and fierce elemental giants give a rowdy impression of the Norse myths. But at the centre of their cosmos stands a gnarled old Ash tree, from which all distances are measured and under which Valhalla lies. In the first poem of The Poetic Edda, where the stories of the Norse Gods are laid down in verse, the Seeress describes it in her prophesy: “I know that an ash-tree stands called Yggdrasil,a high tree soaked with shining loamfrom there come the dews which fall in the valley, ever green, it stands over the well of fate.” It is from this tree that the father of the Gods, Odin, will ultimately hang himself: an image of divine sacrifice so problematic for thirteenth century Christians that they left it out when they wrote the myths down.What was the theology that inspired the Vikings and what role did their myths and religion play in their daily lives?

The Volga Vikings – Between the 8th and the 10th centuries AD, fierce Scandinavian warriors raided and then settled large swathes of Europe, particularly Britain, Ireland and parts of northern France. These were the Vikings, and their story is well known today. Far fewer people realise that groups of Norsemen also travelled east.These Volga Vikings, also known as the Rus, crossed the Baltic into present-day Russia and the Ukraine and founded settlements there. They traded commodities including furs and slaves for Islamic silver, and penetrated so far east as to reach Baghdad. Their activities were documented by Arab scholars: one, Ahmad ibn Fadlan, recorded that the Volga Vikings he met were perfect physical specimens but also “the filthiest of God’s creatures”. Through trade and culture they brought West and East into regular contact; their story sheds light on both Scandinavian and early Islamic history

The Writing of History / Cultural Topics

The History of History – Melvyn Bragg and guests discuss how the writing of history has changed over time, from ancient epics to medieval hagiographies and modern deconstructions. In the 6th century AD, the bishop of Tours began his history of the world with a simple observation that “A great many things keep happening, some of them good, some of them bad”. For a phrase that captures the whole of history it’s among the best, but in writing about the past we are rarely so economical. From ancient epics – Thucydides’ History of the Peloponnesian War – to medieval hagiographies and modern deconstructions, historians have endlessly chronicled, surveyed and analysed the great many things that keep happening, declaring some of them good and some of them bad. But the writing of history always illuminates two periods – the one history is written about and the one it is written in. And to look at how the writing of history has changed is to examine the way successive ages have understood their world. In short, there is a history to history?

Just War – There were theories about a justified or noble war before the birth of Christ, but it was his reported teachings and a powerful influence, particularly on the Emperor Constantine, which set the standard which had to be kept or bluntly modified. “I say unto you, love your own image,” Matthew writes, “bless them that curse you, be good to them that hate you and persecute you”. In the fifth century, the mighty St Augustus prised the Christian church away from Christ’s reported teachings and the idea of a Just War took root to be formalised and given power by St Thomas Aquinas in the thirteenth century, and by other Christian commentators even up to this day. But after a century, our century, of almost unimaginably violent conflict, does the term a Just War have any meaning at all? The historian AJP Taylor wrote that “the medieval pursuit of the just war is a pursuit as elusive as the Holy Grail. For it is almost universally true that in war each side thinks itself in the right, and there is no arbiter except victory to decide between them”. So is the Christian idea of the Just War simply a way of justifying aggression or is it a moral position to take?