The use of enamel to decorate objects is very ancient, going back to the 13th C BC. Enamel was used to add colourful decoration to metalwork, including gold and silver objects, as well as sometimes being used alone. Enamelled artwork survives in examples from across the world, from Ancient Greece and Rome to Islamic and Byzantine art, and beyond to China and Japan in the early modern and modern periods.

Some medieval enamelwork is what we call cloisonné enamel – this term means ‘compartment’, or ‘partition’, and refers to the fact that the enamelwork was created first by soldering small wires or strips of metal to the surface of the chosen object, then filled with enamel paste before being fired in a kiln to set the enamel. Another technique, known as champlevé, where recesses in metal were filled with opaque red, blue, white and green enamel.

Enamel was a very popular choice for the decoration of brooches and other silver jewellery in the Late Antique period and centuries following. By the ninth century skilled craftsmen used cloisonné enamel to create portraits of Christ, the saints and other figures, including anthropomorphized representations of the sun and moon, influenced by Byzantine styles. Surprisingly, there is little evidence for the use of enamelling techniques in Islamic art.

Click the thumbnails below to discover more about enamelwork in tenth- and eleventh-century Europe, through a variety of objects and artworks: 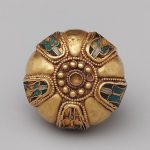 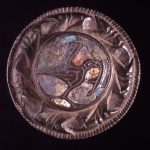 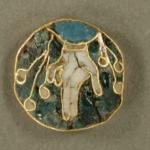 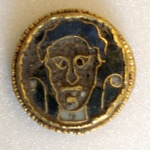