Sculptures can be made of many different materials, and can be either free-standing or set into the material of a building as architectural sculptures. For free-standing sculptures, bronze is one of the most popular metals used for casting works from antiquity to the modern-day. The tenth and eleventh centuries saw monumental works in bronze, particularly for church decoration, become popular. Doors were cast for cathedral churches, reminiscent of the bronze doors for Aachen Cathedral thought to have been created during Charlemagne’s reign. Columns and enormous candelabras cast in bronze were also created for tenth and eleventh-century monasteries and cathedrals.

Bronze could be decorated with relief sculpture, where figures project forward from the background; this decoration was first carved in a soft material, either clay or wax, which was then used to create a mould into which liquid bronze was poured (cast). This is the form used for the magnificent bronze relief sculptures at Hildesheim in the early eleventh century.

Other sculptures were created in stone, alabaster, wood or precious materials, often adorning the surfaces of churches. The stone walls and column capitals of a church could be decorated with carvings of biblical scenes, animal, floral, or other motifs, ranging from elaborate, finely detailed designs to more simplistic decoration. Free-standing sculptures in wood or precious metals, such as the Golden Madonna of Essen or the Gero Crucifix, became more popular in the later half of this period.

Tombs were primarily housed in church institutions; either local churches, monastic churches, or cathedral churches. Depending on the status of the person buried, these tombs could be placed in prominent positions within the church itself, or be included in the church-yard cemetery or in a more out-of-the-way part of the church. If a person founded a church, their tomb could be given a position of honour in the nave of the church in front of the altar, or in the crypt of the church behind or underneath the altar.

The bodies of powerful figures like kings, queens, nobles or bishops were often buried in a sarcophagus, a stone coffin. This could be made of sandstone, marble, or another stone material, and could be engraved with an inscription commemorating the person it contained. Tombs from the earlier part of this period were often very simply decorated or left plain, while later eleventh-century tombs could feature more decoration, such as bronze grave portraits laid onto the top of the tomb. 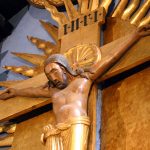 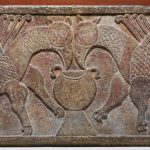 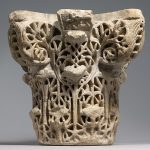 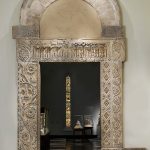 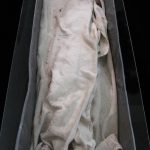 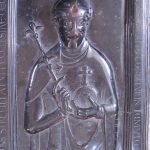 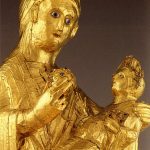 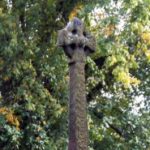