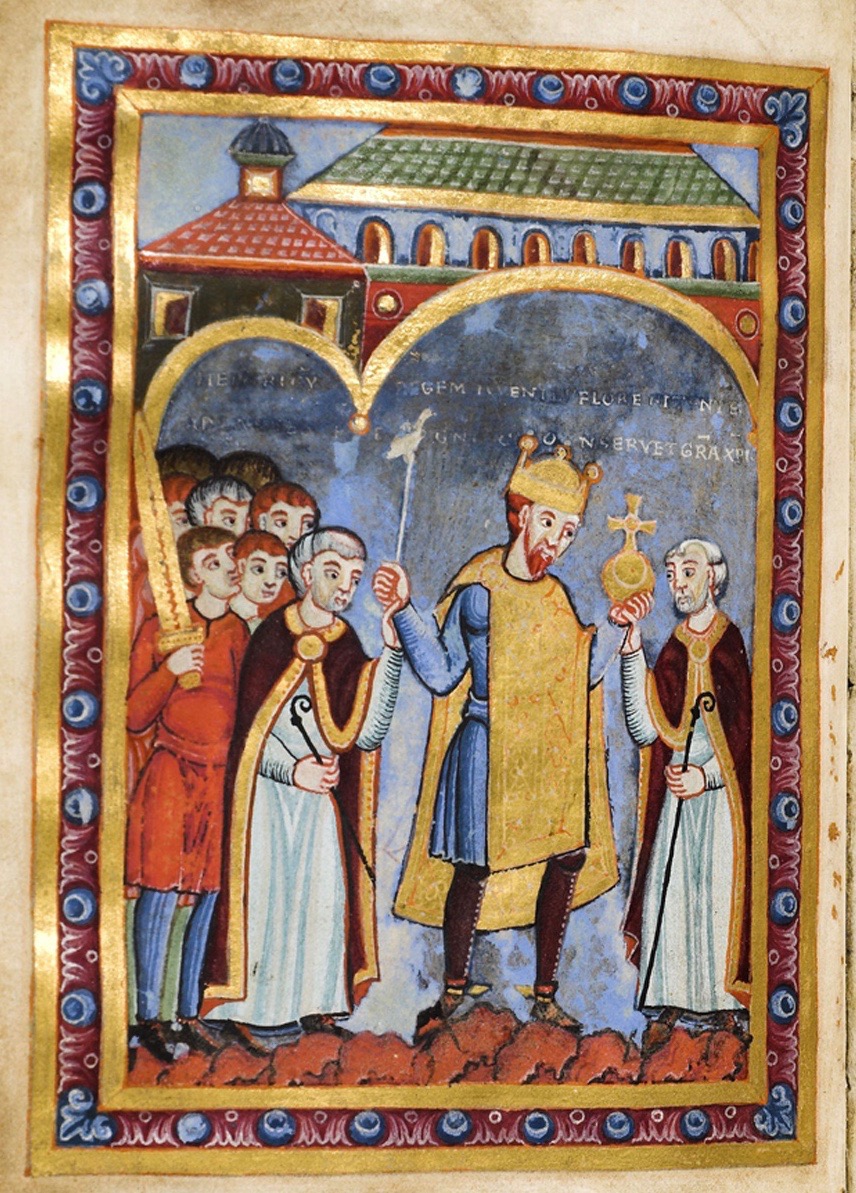 Bishop
Leader elected or appointed over an episcopal see, responsible for the care of the souls in his diocese and administration of church institutions. In the 10th and 11th centuries, bishops were usually from aristocratic families and held onto secular ideals – some led armies directly as warrior bishops. Some bishops could also be abbots.

Count
Local lord in charge of an area of land called a comitatus. They could either inherit their role, be appointed as ruler over one or more comitati by the king, or be given the title of count of the palace (palatine count) as an honorary position.

Duke
The ruler of a duchy/march, responsible for raising armies and defending borders; they could be appointed by a king or emperor, or inherit their position from a relative.

Emperor
In the west, the ruler crowned by Pope in Rome. In the 10th and 11th centuries, emperors came from the dynasties of the Ottonians and Salians, who ruled over Germany and Italy; this empire was later called the Holy Roman Empire, but for this period the term is anachronistic.

Lay abbot
A nobleman installed as leader over a monastery; lay abbots are different from religious abbots who were members of the community that had taken religious vows.

Lord
In this period, lord is not a title, but marks of relationship; a lord was someone in a position of authority over another person. Emperors, bishops, queens, counts, abbots, dukes and so on were all lords over people under their rule.

Queen
The wife of the king, often (though not always) consecrated as queen on or after her husband’s coronation king. In the 10th and 11th centuries we do not see any queens ruling in their own right; they gained their authority primarily as wives or mothers of current kings. 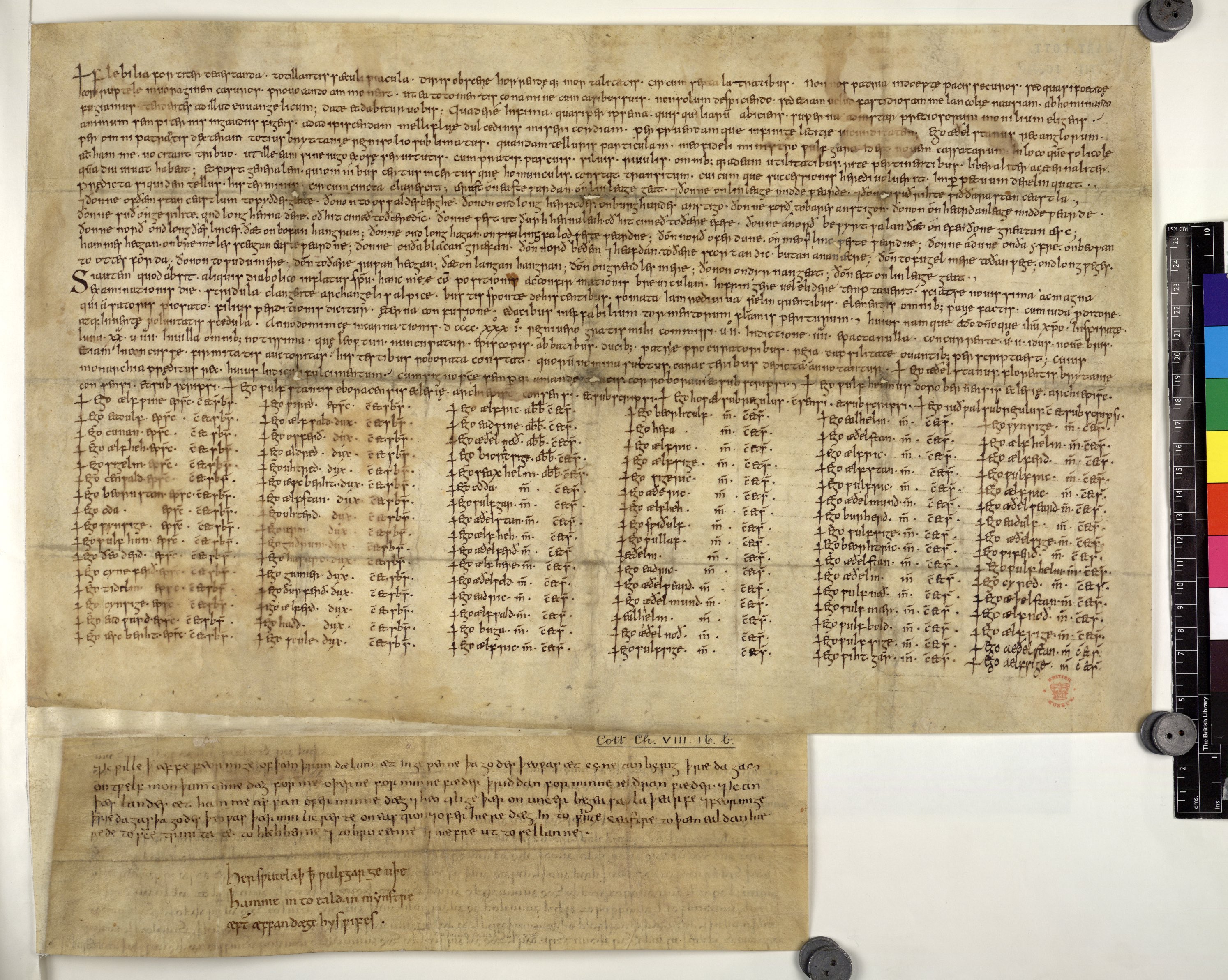 London, British Library, Cotton Charter viii. 16: the original single sheet of a royal diploma of King Æthelstan, drawn up in AD 931 by the anonymous draftsman known to scholarship as ‘Æthelstan A’ (Sawyer 416).

Capitulary
So-called because they were divided into sections called capitula (chapters), these texts were orders or acts issued by the king or emperor, usually administrative or legislative in nature. Although almost unique to the Carolingians, these texts were frequently copied and compiled in the tenth and eleventh centuries.

Cartulary
A type of book that contained copies of some or all of the records belonging to a religious institution, including charters, that had been collected over time.

Charter
Most charters record grants, either permanent or temporary, of land or privileges, and were usually written in Latin. Royal charters, sometimes called diplomas were given by a king/emperor, and more rarely by queens to a religious institution, or to a lay beneficiary.

Hagiography
This genre refers to the biographies of saints or spiritual leaders. Such texts are sometimes called Lives of Saints, and describe the actions and miracles of their subjects. Sometimes such texts also contain details about local history, contemporary politics, or social networks.

Letter
Most letters that survive today were collected and transmitted together copied into books, either brought together because of a shared theme or their authorship. A vibrant culture of letter-writing is evident for our period, and letters were exchanged across Europe between kings, emperors, popes, abbesses, and lay men and women, amongst others.

Manuscript
A book or document written by hand, in this period onto vellum (prepared animal skin). Manuscripts could be single sheets or huge books, decorated or plain, neat or very messy! Many manuscripts that survive today were held by religious institutions in the Middle Ages.

Necrology
Book of names of dead Christians, listed so that they may be prayed for.

Writ
Short documents written in the vernacular and issued by kings or others to assembled audiences. They often had a seal attached to show their authority. This type of document emerged in the late ninth century for different purposes, but tended to be used for grants of lands or privileges.

The convent of Quedlinburg, a monastery of canonesses and royal/imperial residence. Photo credit Sarah Greer, 2015.

Episcopal see
The area over which a bishop had authority, with his ‘see’ or ‘seat’ in the principal town or city in this area. Also known as diocese.

Houses of canons/canonesses
Type of monastery with men or women not living under the Benedictine rule. Inhabitants could potentially live in individual dwellings inside the monastic enclosure, own property, wear secular clothing and have servants.

March (or mark)
An area of land on a border between two kingdoms or realms. The boundaries between kingdoms were not as defined as they are today. The secular ruler in charge of a march could be called a margrave.

Palace
Building complexes used as royal or imperial residences for rulers. Palaces usually included a hall (aula) and chapel or cathedral, and could also be monasteries or episcopal residences.

Rome
Residence of the pope and the place where kings were made emperors. In the tenth and eleventh centuries factions vied for power and control, and Rome was a place where coups and violence occurred.

‘Unfree’
This broad term applies to those who existed on a sliding scale of dependence to a lord or owner and whose movement was restricted, whether we call them ‘slaves’, ‘serfs’, or another term. People could become unfree through birth to unfree parents, war and capture, poverty, or judicial punishment, amongst other events. They could (re)gain freedom through purchase or a process called manumission, but were in practice often still classed as somehow less than those who had never been unfree. In our tenth- and eleventh- centuries unfree labour, those working in a household or farm, was difficult to distinguish from those who were captured slaves or ‘free’ tenants.