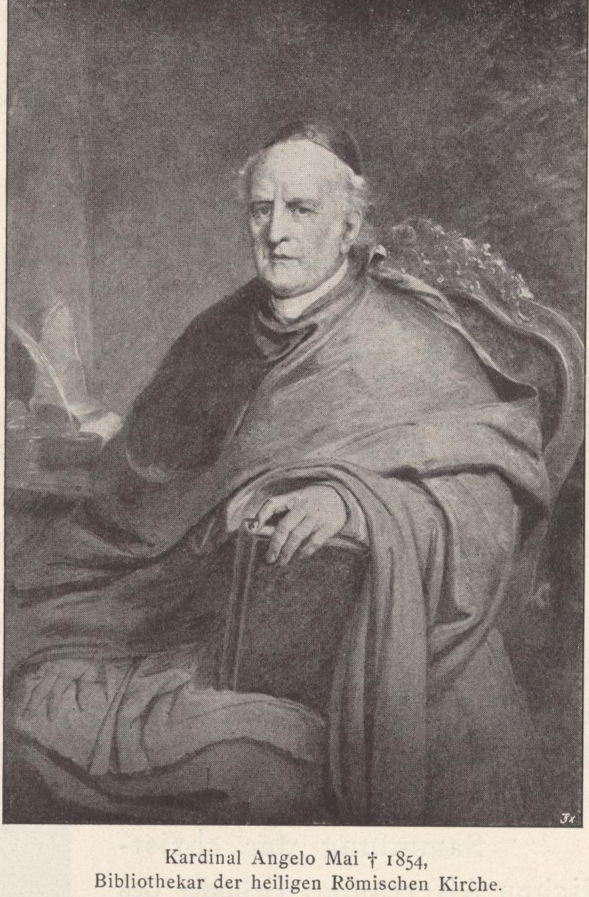 The so-called Homiliary of Luculentius is an early medieval text with an unfortunate fate. Already known in fragments since the seventeenth century, it became part of the history of Latin medieval literature only at a very late stage of research due to incorrectly attributed dates and locations. The work is missing in all global, national and regional handbooks and surveys of Medieval Latin literature, since it was qualified as the product of a patristic author working at some point in time between the fifth and seventh century. Because of a lack of manuscript studies, the author’s location was also uncertain. Previous research favoured an Italian author. Angelo Mai, the discoverer of the first 18 homilies of this collection, already formulated this geographical hypothesis in the early nineteenth century (Figure 1). He edited the homilies from two manuscripts preserved at Roman libraries: Città del Vaticano, Biblioteca Apostolica Vaticana, Vat. lat. 6081 and Roma, Biblioteca Vallicelliana, Tomus XX, which mention the name “Luculentius” without further information about his position in the Latin Church. Both manuscripts are supposed to have been written in Central Italy in the late twelfth or even the first half of the thirteenth century.

Yet, the history of the text and its early transmission is quite different. In 1914, the German philologist August Eduard Anspach, a specialist of Isidore of Seville, discovered the two oldest, more or less complete copies of the work in Madrid and tried to identify their texts. Because of the importance of this homiliary, Anspach was chosen as its official editor for the prestigious series “Corpus Scriptorum Ecclesiasticorum Latinorum” (CSEL) at the Austrian Academy of Sciences, Vienna. These copies, Madrid, Biblioteca de la Real Academia de la Historia, Ms. 17 and Ms. 21, are mid-tenth-century products of the Catalan Benedictine monastery of Sant Cugat del Vallès and are, at present, the two oldest known manuscripts from its scriptorium. In these copies, the collection comprises 156 homilies with the majority on the Gospels and Epistles, starting the annual cycle with the Christmas vigil. Both roughly contemporary copies had seemingly the same model. Despite the mutilated state of conservation of these copies, the Catalan palaeographer Anscari Manuel Mundó i Marcet could at least decipher the colophon of Ms. 17 on fol. 241va, so that we know that the priest Truitari copied this manuscript in 956/957 under Abbot Landericus of Sant Cugat (Figure 2). 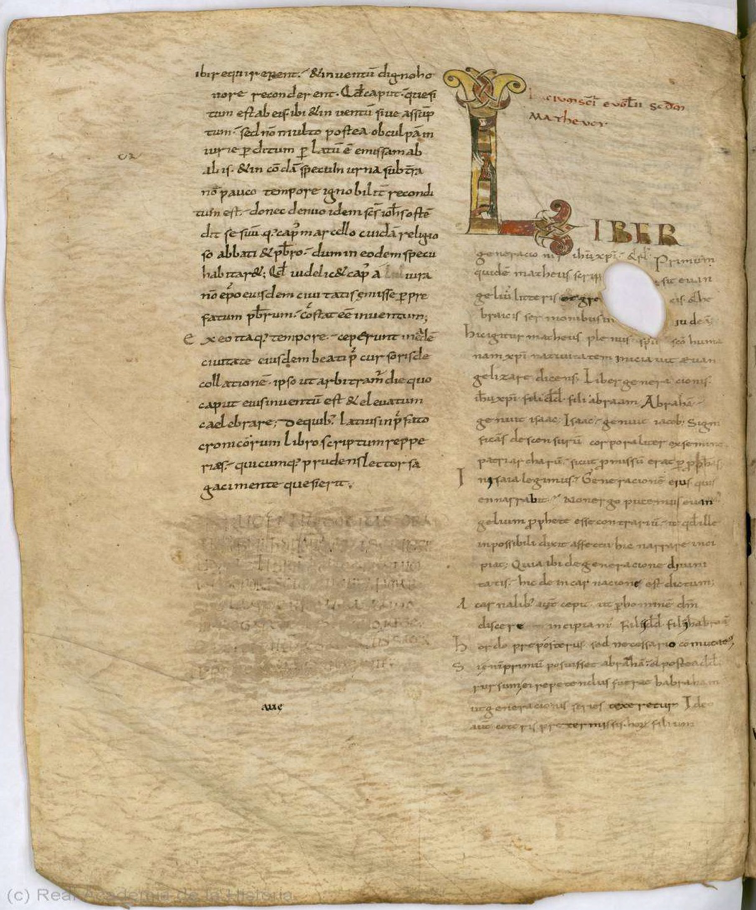 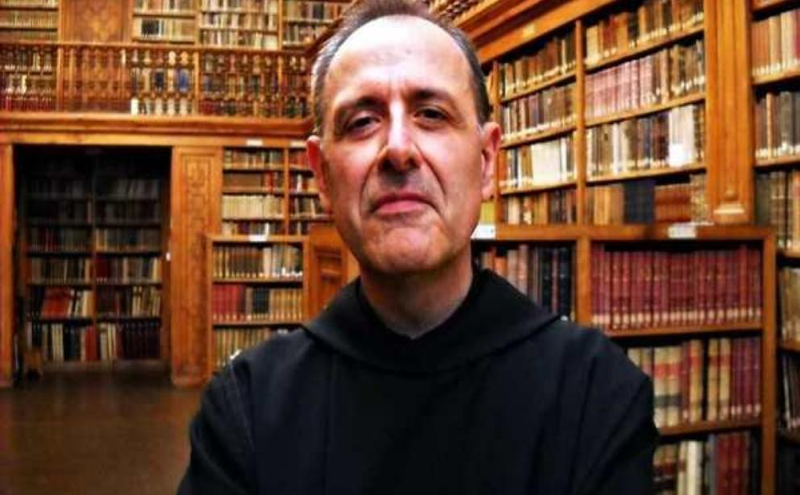 Following the Spanish Jesuit and Church historian Zacarías García Villada, who already postulated an author working in the so-called Spanish March because of the Carolingian script and content of these manuscripts, we know today – after the intensive manuscript research accomplished by Joseph Lemarié, Raymond Étaix and especially Francesc Xavier Altés i Aguiló (Figure 3) – that the two copies from Sant Cugat del Vallès represent the oldest text version, available in two further fragmentary manuscripts from tenth-century Catalonia and one fragment of twelfth-century Catalonia. A second version with characteristic text features and variants, datable to the middle of the tenth century, is transmitted in 91 further early Catalan manuscript fragments. The complete text transmission of Luculentius’s Homiliary thus starts in the north-eastern part of the Iberian Peninsula with a strikingly early core area forming in the diocese of Vic, whereas the peripheral and late Italian transmission shows common text features with the second version and offers only a small text selection of the whole work.

This scenario suggests an author working somewhere in the Spanish March. Yet there is another textual argument not to be dismissed. One of the main sources of Luculentius’s work is the Homiliary of the Visigothic Benedictine abbot, Smaragd of Saint-Mihiel, who came from this Septimanian-Catalan border region. With regard to this history of texts, García Villada has already speculated that “Luculentius” is nothing else than the Latinised form of “Smaragdus”. “Luculentius” thus would have been more a reference to the famous Visigothic-Carolingian author than a proper name. On the other hand, this Latin name, combined with the exploitation of the Carolingian homilies of the Benedictine monks Haimo and Heiric of Auxerre and a source also used for the Franco-Catalan recension of the Carolingian Liverani Homiliary suggest a younger author. Shall we thus locate Luculentius in the Spanish March and still attribute him to the ninth century? A further strong argument for this region and date is the liturgical and ecclesiastical influence that the Church of Narbonne exerted at that time on both sides of the Pyrenees. In addition, we also have traces of the liturgical use of Luculentius from the ninth to the twelfth century in Narbonne, Carcassone and Saint-Pons de Thomières. Luculentius, who seems to be a Benedictine monk, would thus have been one of the earliest, if not the first, Latin author of this region between “Francia” and “Hispania”, writing after its integration into the Carolingian Empire. We can further substantiate this geographical and chronological attribution by Luculentius’s Vulgate version, as its features seem to be compatible with specific characteristics of some copies of the Catalan Bible tradition of the Benedictine abbey Ripoll, the nearby episcopal see of Vic and the abbey Saint-Michel de Cuxa in the Pyrenees that in turn had strong connections with Ripoll and Vic.

But the Homiliary of Luculentius has another far-reaching dimension as well – it is at pains to demonstrate the correct position of Catholic Christian faith against deviant heretical, Jewish and pagan (Muslim) positions. García Villada was the first scholar to present this knowledge by means of a prominent example, though he did not indicate the exact place in this collection: he says that in one homily, Luculentius focuses on the Muslims’ excessive drinking of alcohol despite the Qur’ān’s explicit prohibition. In García Villada’s eyes, only an author with exact knowledge of the new religious law could write comments like these. What was unknown to García Villada at his time is the fact that this homily (no 128) forms part of the oldest text version. Yet, do we have authentic knowledge of the Qur’ān in this passage? Alternatively, are we instead seeing oral Muslim traditions? Alternatively again, are we dealing not with specific Muslim behaviour but rather with a general objection against all drunkenness in the different religious communities? At present, a definite answer is seemingly not possible. However, if García Villada is right, Luculentius would have been a new type of cultural broker of qur’ānic knowledge between two worlds, due to his alleged location in the Spanish March around 900. Working in this frontier society, he would have been a representative of the mature monastic, exegetical and theological culture of the Carolingian reform church of the ninth century but would have now been confronted with the central problem of re-establishing and consolidating the new structures of the Latin Christian Church in immediate contact with the religious challenges of this border-zone to al-Andalus. A first cursory reading of both published and unpublished homilies seems to confirm this religious and social context of his work, because it shows that Luculentius systematically confines his correct Catholic position against erroneous religious modes of behaviour and opinions of heretics, Jews and Muslims in many of his homilies. This suggests an interpretation of the above-quoted passage in the context of polemics and apologetics of his liminal Mediterranean society, which means that we also have to identify and discuss systematically the many comparable comments on the wrong ‘religious other’ in this work.

The rediscovery of the Homiliary of Luculentius shows the full potential of our HERA project on the role that Carolingian culture played in an early medieval transcultural frontier society such as the Spanish March (Catalonia). Yet our new research project, which is preparing a critical edition of the full text of this work, of which only 49 of 156 homilies, thus less than a third of the whole text, have been published, faces some new multi-disciplinary challenges.

Beside the transcription and comparison of the two above-mentioned mid-tenth-century copies of the Homiliary from Sant Cugat del Vallès, we still need an exact codicological and palaeographical qualification and a textual classification of all other testimonies of the Homiliary (manuscripts and fragments). The possible reunification of the many fragments scattered in archives and libraries, particularly in Catalonia, will allow us to reconstruct further homiliaries and their rich typology of monastic and clerical copies of the full collection or selections of it (Figure 4). 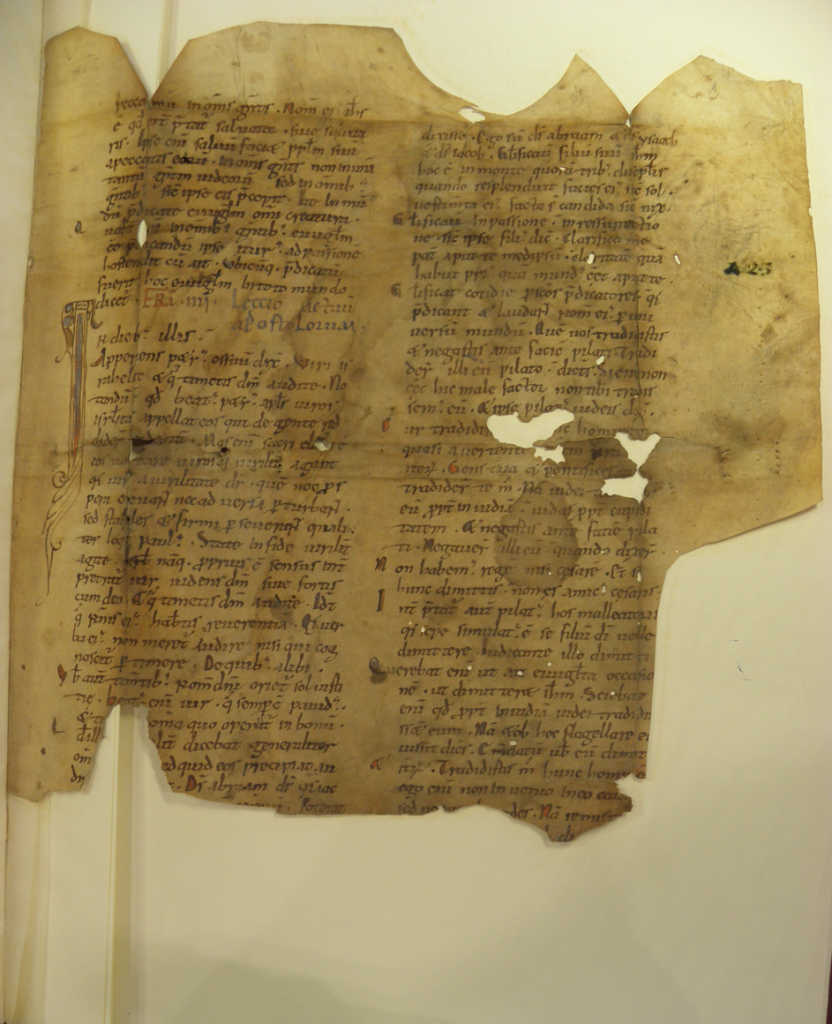 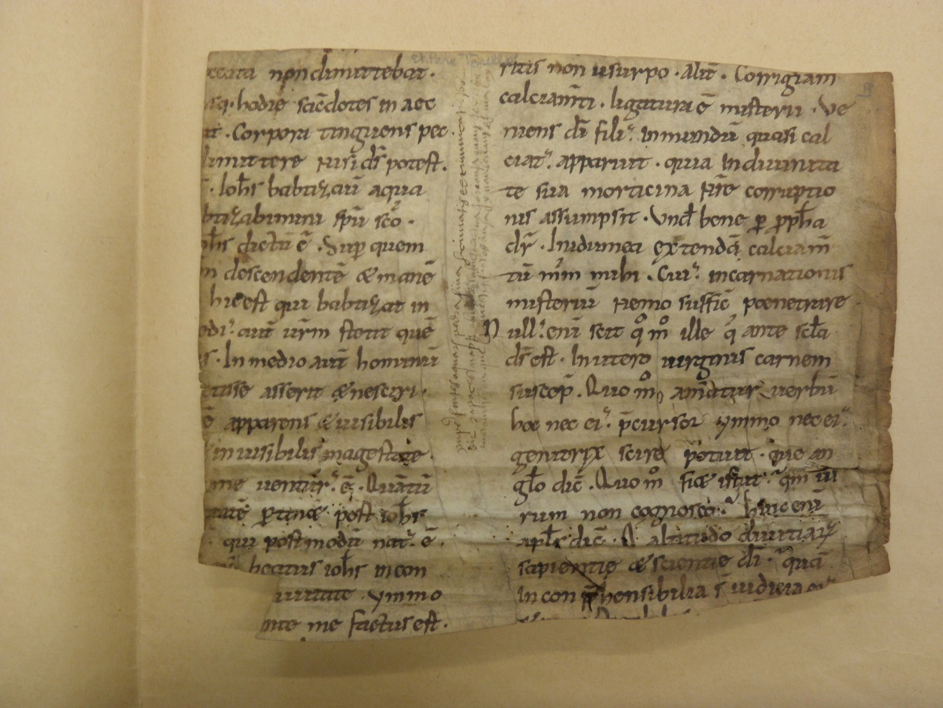 Figure 4a and 4b: Ripoll, Arxiu Comarcal del Ripollès, Fons Sant Pere, Ms. 4A recto and Vic, Arxiu i Biblioteca Episcopal, Fragm. IX/16, fol. 2v, written in the scriptorium of Vic Cathedral, middle of the tenth century, belong to the same manuscript.

Consequently, we will be able to understand these manuscripts’ daily use in the individual contexts of monasteries, clerical communities or parish churches. For this purpose we are currently going through the Catalan collections. The surprisingly high number of early testimonies of the Homiliary from the tenth and earlier eleventh century show the typical Catalan palaeographical features we know from other contemporaneous copies from Vic and Ripoll (Figure 5). Compared to the currently-known overall transmission of the homilies, a strikingly large part of fragments stem from churches of the diocese of Vic which further strengthens our hypothesis that this was the earliest region of production and transmission of Luculentius’s Homiliary (Figure 6). In addition, we are also consulting the rich tradition of medieval library catalogues and book endowments of the parish churches, cathedrals and monastic and canonical houses in Septimania, Catalonia and other parts of the Iberian Peninsula in order to identify further lost copies or even to link preserved manuscripts and fragments of the Homiliary with these medieval mentions. This work will enable us to contextualise the Homiliary’s fate in its original and later monastic, religious and political frameworks. 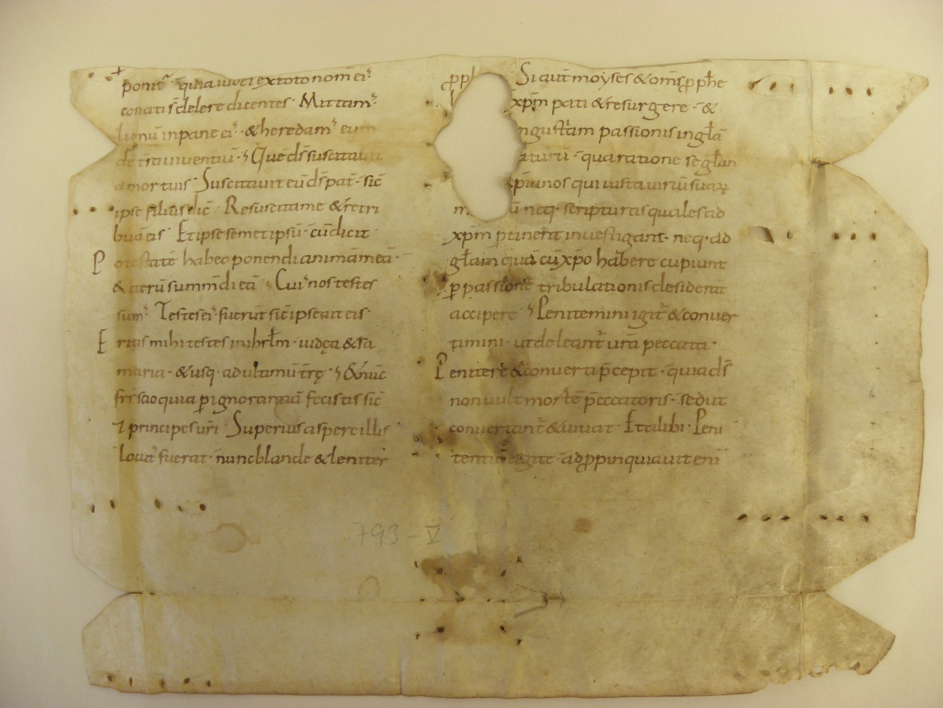 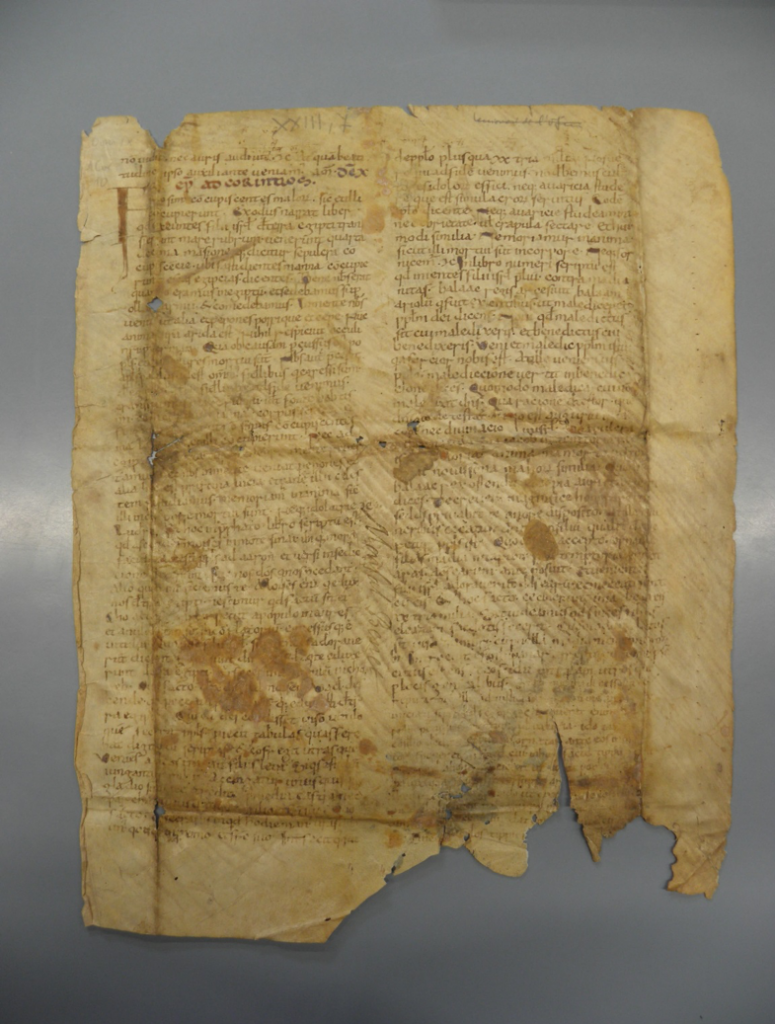 With the establishment of the apparatuses of variants and the identification of the sources of the work, we will gain a deeper insight into the range of classical, patristic and early medieval sources used for the Homiliary and identify its proper text material. Moreover, we will also lay the base for a detailed analysis of the Homiliary’s Latin language which shows specific phonological, morphological, syntactical and lexical features. All these observations strengthen our impression that Luculentius’s Homiliary belongs to the emerging early medieval Catalonia.

*The text of this research blog was presented first in the form of a paper under the title “Preaching Christ from a Transcultural Standpoint: The Homiliary of Luculentius, The Oldest Indigenous Work of Carolingian Text Culture in Early Medieval Catalonia (c. 900)” on occasion of the 6th Biennial Conference of the Society for the Medieval Mediterranean “Movement and Mobility in the Mediterranean (6th–15th Centuries)” in the session “New Perspectives in Research on Texts from the Iberian Peninsula: Editions and Studies”, Barcelona, Institut d’Estudis Medievals, July 9, 2019. I thank all participants for discussing this widely-unknown Carolingian work, my wife Dr. Eulàlia Vernet i Pons for exploring with me the rich Catalan manuscript collections and for giving me linguistic advice on the proto-Romance features in Luculentius’s Latin, and Dr. Sarah Greer for revising the English of a now-elaborated text version.