At the heart of After Empire is a view of the tenth century as an era of change. New dynasties, sometimes even new kingdoms, had to reshape the tools available to them – or craft fresh ones – in order to rule effectively. One of these tools was coined money. The Carolingians had laid a firm foundation on which later rulers built. By the latter part of the ninth century, the dominant currency of western Europe, from York to southern Italy, was the silver penny (denarius, denier, denaro, Pfennig). Rooted in traditions dating back to the time of Charlemagne (768–814) and Louis the Pious (814–40), this coinage at once reflects an aspect of economic life as well as an important political institution. Indeed, for the historian coinage is at its most revealing when taken as a window onto how these two sides to its existence interacted. How did rulers manage the provision of currency in their territories?

The issue became more pressing as the tenth century progressed. At its outset, use of silver pennies was comparatively limited in most of western Europe. Partly this was a result of inherent limitations of early medieval currency: each individual coin was relatively high in value, very roughly the equivalent of several tens of Euros. But there were also problems particular to the late ninth and early tenth century, related to the shrinking stock of silver bullion available in western Europe. 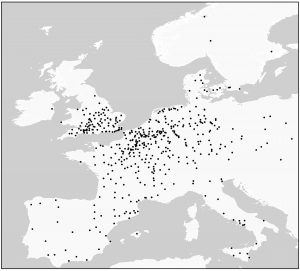 The situation changed markedly in the second half of the tenth century. On archaeological sites from Old St Peter’s to Mainz, and in larger areas with mechanisms for recording finds in place such as England, Wales and the Netherlands, more coins started to be lost. Across a wide area, it looks like coined money was making a comeback. One major factor behind this must have been the opening of new silver mines in central Germany. But demand was just as important as supply, and drove a broad and swift redistribution of fresh silver from the Harz across the Reich as well as to England, France, the Low Countries, Catalonia and northern Italy. Large quantities of German and English coin have also been found in Scandinavia, where they took up the role previously played by silver dirhams imported from the Caliphate via Russia.

Different polities across tenth-century Europe responded to this burgeoning new element of the economy in different ways. Broadly speaking, there was a significant increase in the number of places which produced coins: 146 places can be identified as having issued coin across western Europe in the period 850–900, from Scandinavia to Muslim Spain and southern Italy. Even that number is bulked up by a multitude of mint-places which appeared and disappeared in short order in west Francia late in the reign of Charles the Bald (843–77), and the total fell slightly to 128 in the years 900–50. That number was on the way to doubling by the end of the century: 226 places issued coin between 950–1000, and 310 in the first half of the eleventh century.

These totals have been reached by analysing the activity of about 500 places known to have produced coin between 850 and 1100. 500 is in fact probably an underestimate, since many coinages cannot be assigned to a specific mint-place, and have not been included. I have also omitted places which had a diploma granting minting rights, but for which no actual coins are (yet) known. What remains constitutes a broad-brush picture of how minting evolved over a particularly dynamic period.

Many smaller stories can be teased out from this larger one. It is particularly interesting to see how much variation there was between different regions of Europe. In the kingdom of Italy between Rome and the Alps, for instance, the pattern of coin production was remarkably stable. Even though production and circulation of silver pieces expanded, minting was limited to Pavia, Milan, Lucca and a few other locations, which generally operated in the name of the current king or emperor across the period. Texts such as the Honorantie civitatis Papie reveal how large and closely managed some of these mints were.

Three major divisions can be distinguished. The first is that which incorporates Italy together with west Francia and the former ‘Middle Kingdom’ of Lotharingia; all of these territories were, on the whole, less marked by multiplication of mints. In part this is because some areas within west Francia and Lotharingia gained or regained mint-places (e.g. Flanders and southern France), while others lost out (e.g. Normandy, where minting was centralised in Rouen). What unites the different parts of this division is that there was a well-established network of mints already in the ninth century. This provided a foundation for subsequent developments, including a shift – outside Italy – away from royal or imperial authority over coin production. West Francia in particular sprouted a plethora of currencies operated by aristocrats and major churches over the course of the tenth century; these are traditionally known (albeit somewhat unhelpfully) as the ‘feudal’ coinage.

A second division consists of areas which had little or no prior history of minting, or at least not on the model that prevailed in the former Carolingian Empire and its neighbours. Some had not previously seen extensive use of coined silver at all. During the later tenth and eleventh centuries, western-style coinages were taken up by kings from Ireland to Scandinavia and Hungary, as part of a broader adoption of new cultural institutions, sometimes including Christianity.

The third major division shares some elements of the first two. England and Germany from the Rhine to the Elbe both had prior contact with minting and coin-use, but did not boast a large number of minting-places. England had been host to about ten known in the late ninth century, several of them small, new and operated under Viking overlordship; Wessex, Mercia and the other Anglo-Saxon kingdoms had a rich history of coin-use, but based on a relatively small number of large mint-places. Germany, conversely, probably had only one active mint-place in the later ninth century (Regensburg), and little evidence for widespread use of coin. But in both cases a large quantity of mint-places sprang into being during the tenth century: England had at least 79 in the first half of eleventh century, and Germany 60 by the second half. It should be stressed that there was massive variation in the nature and scale of these places. In England, for instance, Lincoln, York, Winchester and above all London account for a high proportion of finds, whereas the numerous mints of the southwest were generally small operations. The driving force behind this imbalanced spread seems to have been an association of minting with towns (boroughs or byr(i)g in Old English), based in turn on a close relationship between the king and local agents of production known as moneyers. In Germany, the expansion of mints is also reflected by over 80 Ottonian diplomas granting minting rights. These texts reflect a variety of motives, ranging from scarcity of coin to the demands of local trade and the need to protect against forgery by vesting control of the currency in a trustworthy ecclesiastic. Both coins and diplomas underscore this prominent ecclesiastical component: churches and churchmen were seen as worthy beneficiaries of the proceeds of coins, tolls and markets, as well as dependable protectors of sensitive resources.

ory Naismith is a lecturer in medieval history at King’s College London. His books include Money and Power in Anglo-Saxon England: the Southern English Kingdoms 757-865 (Cambridge 2012) and Medieval European Coinage, with a Catalogue of the Coins in the Fitzwilliam Museum. 8: Britain and Ireland c. 400-1066 (Cambridge 2017).