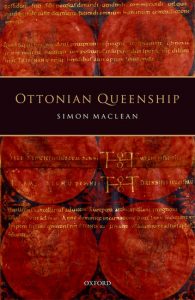 One of our project PIs, Professor Simon MacLean, has recently published a new monograph. Ottonian Queenship is the first major study in English of the queens of the Ottonian dynasty (919-1024). The Ottonians were a family from Saxony who are often regarded as the founders of the medieval German kingdom. They were the most successful of all the dynasties to emerge from the wreckage of the pan-European Carolingian Empire after it disintegrated in 888, ruling as kings and emperors in Germany and Italy and exerting indirect hegemony in France and in Eastern Europe.

It has long been noted by historians that Ottonian queens were peculiarly powerful – indeed, among the most powerful of the entire Middle Ages. Their reputations, particularly those of the empresses Theophanu (d.991) and Adelheid (d.999) have been commemorated for a thousand years in art, literature, and opera. But while the exceptional status of the Ottonian queens is well appreciated, it has not been fully explained. Ottonian Queenship offers an original interpretation of Ottonian queenship through a study of the sources for the dynasty’s six queens, and seeks to explain it as a phenomenon with a beginning, middle, and end. The argument is that Ottonian queenship has to be understood as a feature in a broader historical landscape, and that its history is intimately connected with the unfolding story of the royal dynasty as a whole.

MacLean therefore interprets the spectacular status of Ottonian royal women not as a matter of extraordinary individual personalities, but as a distinctive product of the post-Carolingian era in which the certainties of the ninth century were breaking down amidst overlapping struggles for elite family power, royal legitimacy, and territory. Queenship provides a thread which takes us through the complicated story of a crucial century in Europe’s creation, and helps explain how new ideas of order were constructed from the debris of the past.