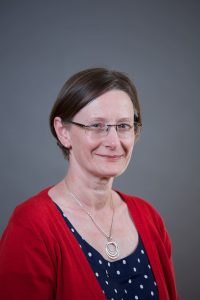 Sarah Hamilton is professor of medieval history at the University of Exeter.   She works on social and religious history in the Latin West in the tenth and eleventh centuries.   Her most recent monograph explored the relationship between the institutional Church and the laity and the afterlife of the Carolingian reforms: Church and People in the Medieval West, 900-1200 (Abingdon: Routledge, 2013).  She is particularly interested in investigating the evidence of medieval liturgical texts for the light they cast on medieval political and social culture as evidenced by her past and ongoing work into penance, excommunication and other pastoral rites, and the book she recently edited with Helen Gittos: Understanding Medieval Liturgy: Essays in Interpretation (Farnham: Ashgate, 2016).

The years 900-1050 witnessed important developments in the development of the medieval liturgy, with the wider circulation of texts arising out of the ninth-century Carolingian reforms and the compilation of new collections, especially pontificals for bishops.   She will use the HERA project to explore both these aspects, investigating the tensions between the present, the Carolingian past and other more remote pasts in the mental world of churchmen in this period through analysis of how (some) ninth-century texts were received  and new tenth-century compilations were composed.