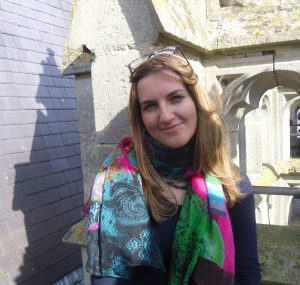 Having studied history and literature in Lomonosov Moscow State University and Paris-Sorbonne, I conducted a Master thesis at the École des Hautes Études en Sciences Sociales in 2014–2015, where I specialised in the iconography of liturgical manuscripts of the thirteenth and fourteenth centuries. In 2016, I obtained a Professional Master on Digital Humanities at the École Nationale des Chartes, completed by an internship on transformation of data formats for digitising a catalogue of manuscripts at the Institut de Recherche et d’Histoire des Textes (IRHT) in Paris. I am now coming back to the direct work on manuscripts, as from November 2016 I have been engaged in the HERA research project After Empire.

Based at the Universitat Autònoma de Barcelona, I am working on the transmission of Carolingian manuscripts from French to Catalan monasteries. My PhD thesis seeks to understand the ways in which the Carolingian conception of Christianity and a common and shared Christendom are represented at the regional Catalan level during the tenth and eleventh centuries. It especially aims at investigating Catalonia’s development during the period of transition to a more autonomous region from the end of the ninth century onwards. The interaction between Catalan and French monastic scriptoria as well as the transformation of the common Carolingian heritage during the growing autonomisation of Catalonia are two centrals issues of my ongoing research.