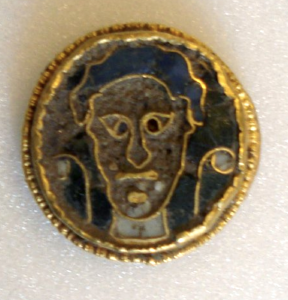 Description: Found in England, this gold and enamel object is an example of the cloisonné technique, where wired compartments are inlaid with enamel. The figure depicted within is probably a man, with plants to his left and right, and blue hair! Some parts of the enamel have become degraded over time.

Images courtesy of the British Museum under CC BY-NC-SA 4.0 license.