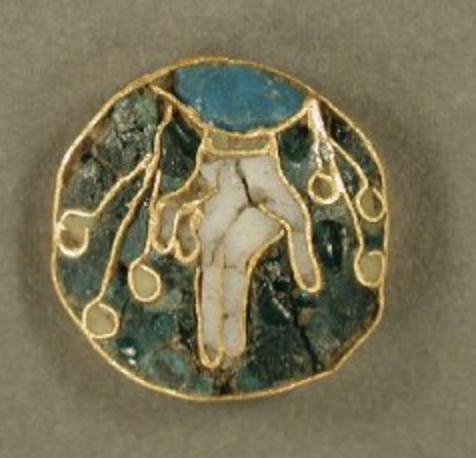 Place of Production: Germany or England

Description: Found in England, this gold and enamel roundel presents the viewer with a vision of the Hand of God pointing downwards – the hand emerges from the blue enamel clouds, separated by a gold cuff. The remainder of the roundel is decorated with green translucent enamel and branches or stem-like elements to the left and right.

Originally it would have probably been one of several such objects decorating a larger object, perhaps a cross, reliquary, or book cover. Similar examples of enamelwork can be found on altar crosses from both England, Germany and Italy.

Images courtesy of the British Museum under CC BY-NC-SA 4.0 license.