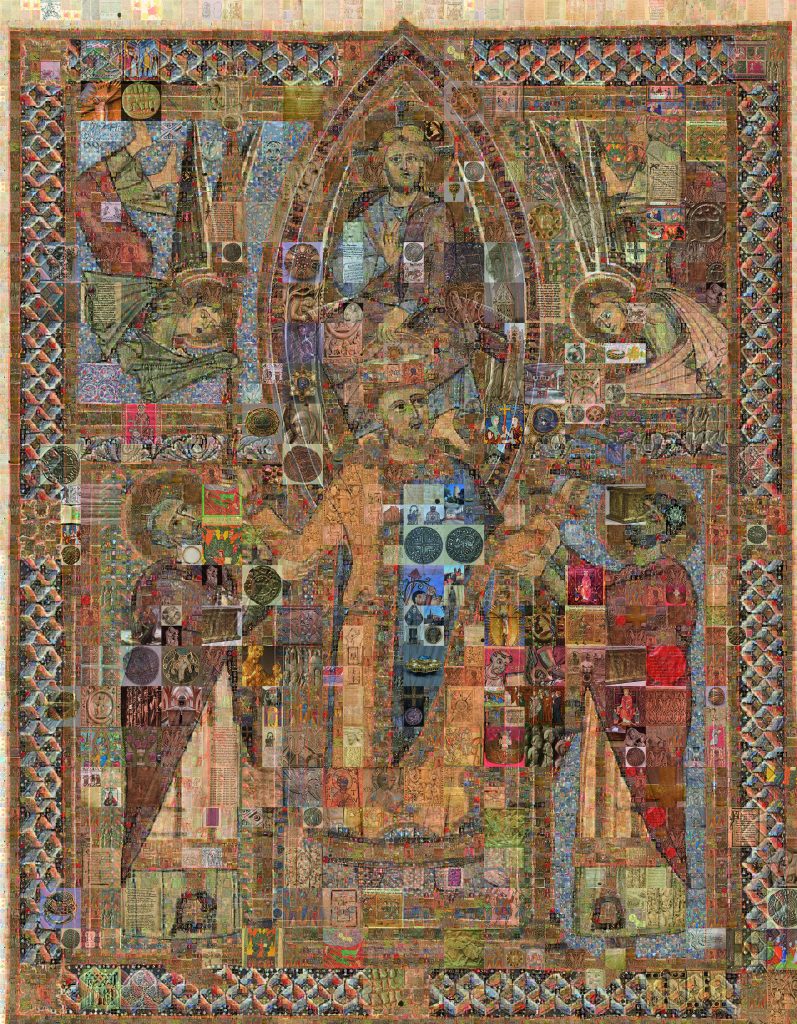 From the 30th of May to the 1st of June, 2019, the Austrian Academy of Sciences hosted the final conference of the After Empire project in Vienna. The conference brought together scholars working on post-Carolingian Europe with those working on other regions experiencing their own ‘times of transition’. Like many of the speakers, several of the moderators of the sessions too came from fields other than that of tenth-century European history – ranging from medieval Byzantium to early medieval monasticism – leading to lively discussions and comparisons.

The After Empire project PI for Vienna, Max Diesenberger, began the conference with a wide-ranging introduction on the strategies through which Carolingian and post-Carolingian authors ‘created’ visions of the past. Many of the papers of the conference built on the same theme through case studies of a number of specific post-Carolingian uses of the past. Simon MacLean and Eric Goldberg discussed the post-Carolingian ‘afterlives’ of later Carolingian capitularies, stressing both their more immediate contexts – Viking raids – as well as their use of earlier notions of Carolingian kingship. Giacomo Vignodelli and Sarah Greer talked about satire and how those who used it deployed in tenth-century Europe deployed the past as a literary tool. 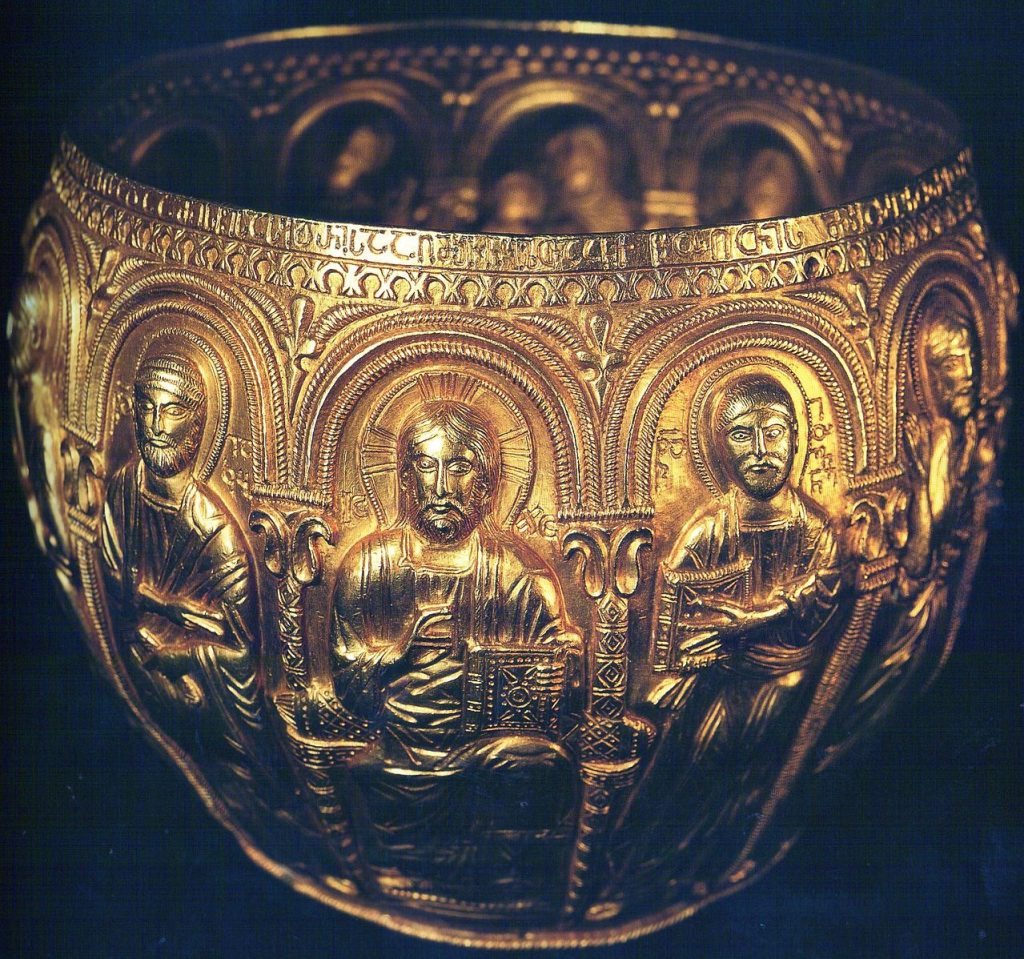 Matthias Tischler took us on a journey through Catalonian manuscript culture, showing how Carolingian texts were disseminated and redacted in Catalonia throughout the tenth century, shaping local ecclesiastical culture; Ekaterina Novokhatko and Lenneke van Raaij both presented on their studies of post-Carolingian uses of Carolingian liturgical traditions in, respectively, tenth-century Catalonia and Trier. Emma Loosley and Eduardo Manzano Moreno spoke about, respectively, the construction of denominational identities in early medieval Georgia and Spain. Loosley discussed how tenth-century Georgian chroniclers attempted to deal with a shift in their Church’s denomination, while Manzano Moreno walked us through the way in which historiographers attempted to face the challenges of narrating identity and history in frontier regions between two religious identities.

Several sessions combined papers looking at similar ways of using the past in two very different regions to great effect. Stefan Esders and Cecilia Palombo presented uses of the past in documentary evidence for governance. Esders walked us through legal change in tenth-century Raetia, stressing how local actors could renegotiate a plurality of legal traditions to better serve local, tenth-century challenges. Palombo then discussed uses of the past in Abbasid Egypt. Although this period is often approached as a time of decay and decentralisation – a parallel to the way medievalists have traditionally approached tenth-century Europe – Palombo argued that monastic archives reveal a wealth of documents on governmental and administrative matters. These religious institutions remained involved in administrative matters throughout the period, suggesting that they functioned as instruments of power and governance. Alice Hicklin’s paper on hostages and the writing of history was comparative in its own right, exploring how conceptions of hostage-giving from Ancient Sumeria, China, and Rome shaped representations of the practice in the tenth- and eleventh-century across continents. 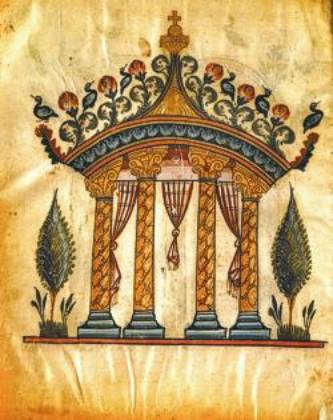 Architectural detail from the Echmiadzin Gospels, 989. Image in Public Domain, via Wikimedia Commons.

Other papers compared different texts that, when positioned in dialogue with each other, can reveal how different authors negotiated their pasts. Tim Greenwood examined the different ways in which Armenian writers constructed the Roman and Byzantine history of their kingdom, highlighting the importance of hitherto neglected sources. Clemens Gantner, presenting the final research paper of the conference, considered the varying attitudes towards Louis II of Italy exhibited both by chroniclers and authors writing during and after the Carolingian heyday, and historians of the nineteenth and twentieth centuries, illustrating how national histories can cloud our understanding of notions of political community.

At the end of the conference, project PI Stefan Esders offered a closing statement, looking back both at the conference and at the almost three years of research into tenth- and eleventh-century uses of the past funded by HERA conducted through the After Empire project. One of the points Esders touched upon is that he, like many of the other project researchers, came to post-Carolingian Europe from an interest in earlier medieval history – and that this has worked out quite nicely. The theme ‘using the past’ allows early medievalists to approach the tenth-century in its own right – instead of as the fizzling-out or end of what went before, or the vague beginnings of what came later – while still building on a past familiarity with earlier sources and scholarly traditions. I think that the convivial discussions between scholars coming from different fields at our final conference – whether their expertise lay in earlier Carolingian history, the medieval history of European cultures that had never been under Carolingian rule, or the history of a more far away region – have shown the great potential of studying times of transition in their own right, both in the way this approach challenges older narratives of decline or beginnings but also in serving as a theme that lends itself very well to comparison. This might, perhaps, also be one of the legacies of the After Empire project as a whole.

Several of the papers presented at the conference will be published in the Open access journal Medieval Worlds later this year.[http://medievalworlds.net/medievalworlds_no8_2018?frames=yes]

For detailed summaries of each paper, you can visit the After Empire twitter page: https://twitter.com/AfterEmpireUNUP