Where do you spend Christmas? For medieval rulers, this was a very important question, and one that had many possible answers. In the tenth century, the itinerant Ottonian rulers spent Christmas at many different places across the empire, often at major cities like Frankfurt, Pavia, Rome, Cologne and Ravenna. Celebrating Christmas was one of the major occasions in the Ottonian kings’ calendar – along with Easter and Pentecost, it was one of the three church feasts on which the king would wear his crown, and was often followed by an assembly or court day bringing together the rest of the royal family with other magnates from across the empire.

This meant that Christmas was also the scene for some momentous events for the Ottonian dynasty. The most important were, without doubt, the coronations of various Ottonian rulers. The first of these was in 967, when Otto II journeyed to Rome to be crowned as co-emperor by the pope on Christmas day. This had been carefully arranged by Otto’s father, Otto I; a year earlier, the elder Otto had spent Christmas in Rome himself with the pope, and the two had sent a letter inviting the younger Otto to come to Rome for the following Christmas so that he could be crowned as emperor himself.

The attention paid to setting up Otto II’s coronation in Rome at Christmas wasn’t coincidental; rather, it was a deliberate re-enactment of the famous imperial coronation of Charlemagne in Rome on Christmas day in 800. The memory of Charlemagne’s coronation was still a potent source of authority in the tenth century; by having Otto II imitate the first Carolingian emperor, Otto I was able to cast himself and his son as Charlemagne’s rightful successors.

Otto II drew on the same source of authority when the time came to crown his own son, Otto III, as king. Rather than holding the ceremony in Rome, Otto II arranged for his son to be crowned in Charlemagne’s own city of Aachen – in the church that contained his grave – on Christmas day in 983. Through both the date and the place, Otto III’s coronation evoked that of Charlemagne, but they also would have been mixed with memories of the earlier Ottonian coronations – both Otto’s father and grandfather had been crowned as king in Aachen too.

Not every Christmas was a happy occasion for the Ottonian family though. In 951, while Otto I celebrated Christmas with his new wife Adelheid in Pavia, his son Liudolf travelled to Saalfeld, a placed that Widukind of Corvey described as ‘disgraced by conspiracies’. There, Liudolf held a feast with a group of coniurationes – conspirators – which launched the beginning of his rebellion against his father and uncle. Another Christmas was also marked by the gory results of a rebellion; while in Rome at Christmas in 966, Otto I ordered the thirteen ringleaders of the Roman group that had driven Pope John out of the city to be hanged as punishment. 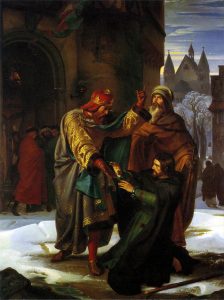 Sometimes though, the events at Christmas marked the end of these family conflicts – this was the case in 941, after Henry the Younger had spent the first years of his older brother Otto I’s reign taking part in several different rebellions against him, culminating in a foiled assassination attempt against Otto at Quedlinburg in the Easter of that year. Henry had been held at Ingelheim briefly, before he travelled to Frankfurt, where Otto was celebrating Christmas. Hrotsvitha of Gandersheim relays a detailed version of the story in her Gesta Ottonis: arriving at night on Christmas Eve, Henry entered Frankfurt just as Otto had begun to celebrate the Christmas vigil in the church. Laying aside his jewels and rich clothes, Henry, dressed in a thin tunic and with bare feet despite the bitter cold of winter, came into the church and threw himself before the altar on the icy ground, begging for pardon for his actions. On seeing this, Otto, ‘overcome with kind compassion’ and ‘in honour of such a peace-bringing day’, granted his brother a full pardon and later appointed him the duchy of Bavaria.

Why is it that we know so much about what kings and emperors did and where they were on Christmas? Part of the reason is to do with how medieval authors tried to work out the beginning of the historic year. A number of annalists and chroniclers chose to count years beginning on Christmas day. For this reason, some annals began their entries for a year with a formula noting where the king spent Christmas – we can see this in the Carolingian annals of St Bertin and Fulda, for example, and it is taken up more systematically in the tenth- and eleventh-century annals, such as Adalbert of Magdeburg’s continuation of Regino of Prüm’s Chronicle, the Annals of Hermann of Reichenau, Bertold of Reichenau, Lampert of Hersfeld and Bernold of St Blasien, among others.

By the time these later authors were writing, this Christmas formula could be used to critique the ruler in question, particularly during the rebellions and conflicts that the Salian dynasty of emperors faced in the later eleventh century. For example, Henry IV’s attempts to celebrate Christmas are presented as particularly weak compared to the apparently glorious celebrations held by the anti-kings Rudolf of Swabia and Hermann of Salm. In fact, by the end of the eleventh century we see some annals starting to use this Christmas formula not for the king or emperor, but instead for the pope – rather than noting where the secular ruler celebrated Christmas, the pope became the new figure of authority. 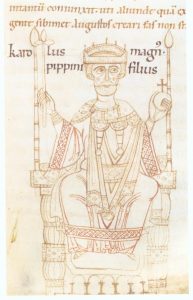 However, by the early twelfth century the authors in the circle surrounding the Salians began to push back, putting the focus firmly onto the emperors once more. The Kaiserchronik created around 1114 for Henry V is a particularly powerful example: its second book begins with Charlemagne’s imperial coronation on Christmas day in 800. In the manuscript now in Corpus Christi, Cambridge, the occasion is marked by a portrait of Charlemagne enthroned as emperor. As this is an annalistic text, and the image occurs at the start of the entry for 800 (which began on Christmas day) the portrait occurs at the exact moment that Charlemagne was crowned in the text. The following Carolingian, Ottonian and Salian emperors all get their own ruler portrait through the rest of the text, presenting them as an unbroken chain of emperors succeeding Charles the Great. Here – this time in literary and visual form – we can see Charlemagne’s coronation on Christmas being used to enhance the authority of rulers across three centuries, connecting them to the legacy of the greatest Carolingian emperor. The memory of Charlemagne’s Christmas coronation was clearly one well worth remembering.