The importance of Christmas in both Anglo-Saxon England and West Francia is clear from the fact that many events were anchored to Christmas: acts in the Anglo-Saxon Chronicle are described as happening ‘forty days before Christmas’ or on ‘the Easter after Christmas’, for instance, while the annalist Flodoard of Rheims strove to begin each year’s events on 25 December’ (Bachrach and Fanning, p. xi). 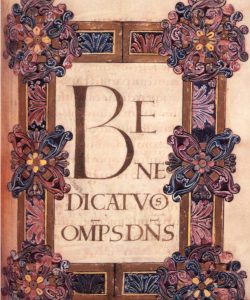 Yet in England the year might begin with Christmas Day, 1 January, 25 March, or even the beginning of September, competing traditions that stemmed from Roman practice and the Church. Furthermore, chroniclers and writers did not record where Anglo-Saxon kings spent Christmas as a matter of course, while Anglo-Saxon royal diplomas as they survive today do not typically note where the king spent Christmas. In West Francia, despite Flodoard’s preference to order events chronologically, his annals mention Christmas Day only once, and then in relation to the death of a miracle-working peasant girl. The chronicler Richer of Rheims, writing in the later tenth century, also paid relatively little attention to the Christmas celebrations of kings, at least in comparison to his Ottonian contemporaries.

Nevertheless, Christmas was still a time of coming together, when even freemen were given twelve days free from work, at least according to the Anglo-Saxon law code issued by Alfred the Great. For the king’s men, however, the Christmas period was spent not at home but at the royal court. On Christmas Day 936, the West Frankish king Louis d’Outremer issued a sumptuous diploma at Compiègne for Sainte-Corneille that deliberately and evocatively borrowed from a diploma his father Charles the Simple had issued at Aachen. Geoffrey Koziol argues that the diploma must be interpreted as ‘an assertion of policy, an assertion of identity, [and] a rehabilitation of his father’s memory’; such strident notes were no doubt bolstered by its promulgation at Louis’ Christmas court. The tenth-century king Æthelstan, in his law code issued at Grately, proclaims that his laws have been decided by himself ‘along with the councillors who have been with me at Christmas at Exeter’. Similarly, the Danish conqueror Cnut declared in his law code ‘This is the ordinance which King Cnut determined with the advice of his councillors, for the praise of God and for his own royal dignity and benefit; and it took place at the holy Christmas season at Winchester.’ 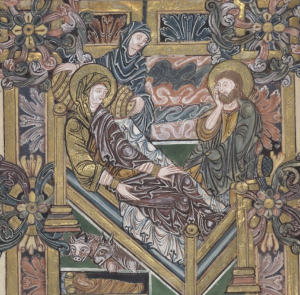 Just as in the Ottonian empire, the echoes of Charlemagne’s coronation on Christmas Day were potent. Hugh Capet, founder of the Capetian dynasty, sought to harness this symbolism when he fought for the coronation of his son Robert II just months after his own, at a Christmas celebration ostensibly organised to celebrate his own summer coronation. Robert was crowned on Christmas Day 996: ‘because the leading men of the realm had assembled at Christmas to celebrate the honour of the king’s [Hugh’s] coronation in the basilica of Sainte-Croix, the archbishop solemnly crowned his son Robert, who had been dressed in purple, to the acclamation of the Franks’ (Richer, IV.13). Although out of the regions under scrutiny here, the Polish king Mieszko II held his coronation on Christmas Day 1025, six months after his father’s death, again perhaps in imitation of Charlemagne, or the Ottonian dynasty. Perhaps the most famous Christmas Day coronation other than that of Charlemagne, is that of William the Conqueror. In 1066, William and his entourage solemnly processed to Westminster Abbey, where on 25 December he was crowned by the Archbishop of York. William probably chose this date as the first symbolically potent option following his military victory, a way to majestically cement his achievements on the battlefield. That tensions ran high is suggested both by the contemporary writer William of Poitiers, who claims that rebels assembled to resist William’s coronation in London, and by later reports that outside of the abbey William’s soldiers burnt buildings and attacked citizens. In 1069, William is said to have worn his crown on Christmas Day as he walked through the city of York, destroyed by his troops in the infamous Harrowing of the North. 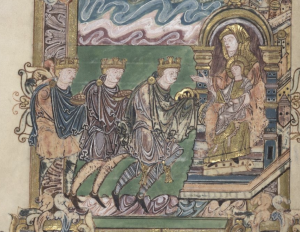 Miniature of the Adoration of the Magi, for the Feast of the Epiphany (6 January). Benedictional of Æthelwold, c. 963-984, British Library, Additional 49598, f. 24v. Image credit, British Library. Image in Public Domain.

Of course, anyone who has watched their share of soap operas knows that bringing together families and friends over the festive period can act as a catalyst for some spectacular showdowns. This was no different for tenth- and eleventh-century kings, who had to deal with rebellions, attempted reconciliations, and violent conflict. Flodoard writes that ‘when the year began’ in 925 Count Ragenald of Roucy ravaged Burgundy. Three years later ‘at the beginning of 928, during the period of the liturgies of the birth of Christ, King Rudolph of Burgundy came with an invading force of Burgundians in order to plunder and burn certain places’. Clearly, Burgundy in the 920s was not the place for a tranquil Christmas break.  In England, the siblings Tostig Godwineson and Queen Edith, the latter the wife of Edward the Confessor, were accused of not one but two murders at Christmas by the twelfth-century chronicler John of Worcester: ‘[Edith] ordered to be killed in the king’s court on the fourth night of Christmas by treachery, Gamel, son of Orm’, while Tostig was implicated in an earlier murder: ‘Ulf, son of Dolfin (whose murder Earl Tostig had treacherously ordered the preceding year at York in his own chamber, under cover of a peace-treaty). 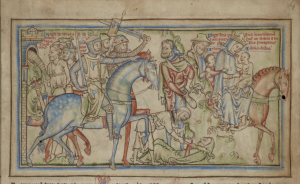 One English chronicler in particular used Christmas as a way to juxtapose ironically the Anglo-Saxons and the Danish raiders and invaders of the eleventh-century. The anonymous author of the Anglo-Saxon Chronicle wrote his account of the reign of Æthelred after the Danish Conquest, expressing his bitter disappointment of the English elite. Thus, in 1006 ‘the Danish army then came after Martinmas to its sanctuary, the Isle of Wight, and procured for themselves everywhere whatever they needed; and then towards Christmas they betook themselves to the entertainment waiting them, out through Hampshire into Berkshire to Reading; and always they observed their ancient custom, lighting their beacons as they went.’

The above shows that although Christmas did not occupy the same prominence in narrative sources stemming from West Francia or England as in the Ottonian evidence presented by Sarah, understanding Christmas in these kingdoms demonstrates the need for careful combing of the documentary sources, which shed some light on the otherwise gloomy representation of Christmas in chronicles and annals. It was nevertheless a vitally important time for the king and his court, when new laws could be made, grievances aired, and campaigns planned. But I doubt that many amongst the upper echelons of society would, in the words of Wizzard, ‘wish it could be Christmas every day’, rife as the occasion was with discord, machinations, and violence.