The Bible in the Early Medieval Iberian World 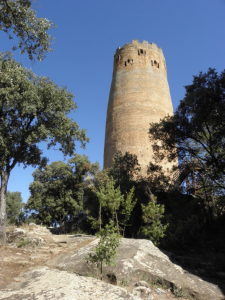 The world of the Iberian Bible is a fragmented one in a double sense. The transmission of old Bibles from late antique and Visigothic times and the production of new Bibles from the late eighth century onwards were situated in a scattered, if not fragmented Christian society in an Islamicate context; moreover, many of these earlier and new Bibles have often survived only in a fragmentary state. This lamentable situation of a manuscript tradition of many gaps and open questions has prevented more intensive research and thus fascinating new insights into a complex network of text transmission and identity building in the various regions of the transcultural Iberian world. My current fieldwork in early medieval Catalonia nevertheless shows ways of how we can identify many missing pieces through typological and medial observations on the manuscript production and integrate these forgotten or neglected puzzle-pieces into the master narrative of a still very ‘Spanish’ story of the Iberian Bible tradition. The paradoxical consequence of this basic work on manuscripts is that it is precisely the rich fragmentary transmission which enables us to deconstruct a petrified narration mainly built on well-preserved – and thus selected – material evidence alone. In addition, former research was more or less focused on the production of Visigothic Bible pandects in Northern Spain and has forgotten about two further central Iberian phenomena from the North-Eastern regions of the so-called Spanish March that would become medieval Catalonia in the tenth century: the strong role that the Carolingian Bible tradition already played in this middle ground between Italy, France and the Iberian Peninsula since the ninth century; and the production and edition of new Bibles in the long tenth century which has not been told in the master narrative of the history of the Bible in Europe after the Carolingian reform.

The New Visigothic Bibles of Northern Spain and al-Andalus

As just mentioned, former research on the Iberian biblical legacy has widely focused on the production of new Visigothic Bible pandects in the Christian territories of Northern Spain, i. e. in Asturias, León and Old Castile, and in al-Andalus from the late eighth to the late eleventh centuries. More recent investigation on manuscript fragments has unearthed further Visigothic fragments, allowing the panorama of these pre-Romanesque Iberian Bibles, many of them preserved only in a fragmentary state of condition, to become clearer now than ever before. I focus here only on the production up to the late tenth century in order to highlight the features of this specific biblical production. First, we see that the early production from the late eighth century to the early tenth century in particular was located parallel in central cities of al-Andalus and Northern Spain. We mention here:

Virtually all these Bibles share common features. They continue the tradition of an established model by using the old page design of three columns with a high number of lines per column, by writing the Visigothic script and applying and mixing the accustomed illuminations techniques, and by transmitting the specific text traditions of the late antique Spanish Bible editions (with exceptions). This zone of new Spanish Bibles shows no import of Carolingian Bible manuscripts and only minor influence of the various Carolingian Bible editions, for example in the Asturian Bible from early ninth-century Oviedo (Codex Cavensis). In addition, the only centre somehow specialized in the production of Biblical manuscripts for the diffusion in the Christian territories, comparable to the Benedictine abbey of Ripoll in eleventh-century medieval Catalonia, was the prestigious scriptorium of San Pedro y San Tomás de Valeránica during the tenth century.

From Visigothic to Carolingian: The New Bibles from the so-called Spanish March and Early Medieval Catalonia

The production of the Bible in the late eighth- to early ninth-century Spanish March, the period of the Carolingian theologians’ struggle against the adoptionism of bishop Felix of Urgell (781–799) and his followers is only observable in some fragments. Like their Northern Spanish counterparts and the just unknown earliest products from the neighbouring Carolingian county of Ribagorça – see nevertheless the Deuteronomy fragments of a large ninth-century Visigothic Bible with three columns (Lleida, Arxiu Capitular, RC.0031 [olim Ms. 13] + Lleida, Museu Diocesà, s. n.) – they are written in Visigothic minuscule – a script certainly used by Felix – and came from the territory of the “ecclesia Narbonensis”, where the new Carolingian minuscule was not introduced at that time. From Felix’s lifetime, we also have a bifolium of a late eighth-century liturgical Hispanic Psalter, already in the Gallican version, but full of Vetus Latina variants (Vic, Museu i Biblioteca Episcopal, Ms. 259), at least fragments from the Prophets (Barcelona, Biblioteca de Catalunya, Ms. 2541-1) and the Psalter (Barcelona, Arxiu de la Corona d’Aragó, Ms. Ripoll 395) from a large-size eighth- to ninth-century Visigothic Bible in several volumes. The place of production of this Bible is not clear yet: if it was produced in the still Visigothic Narbonnais, it was an imported manuscript; if it was a product of the Cathedral of Urgell or Girona, it was the oldest known Bible produced under Carolingian dominion in the Spanish March. An argument in favour of the Cathedral scriptorium of Urgell could be the exceptional position this episcopal see had in the Spanish March which was undergoing a strong Carolingian reform influence because of the Felix affair. This scenario and the bishopric’s protected location not being immediately affected by Muslim raids like Barcelona in the later ninth century could explain why Urgell was the first important production centre of new Bibles in the Spanish March.

The further story of the Bible in early medieval Catalonia is marked by the introduction of the Carolingian Bible, thus by the import of book and text models of the revised Vulgata concerning formats, book orders and theological decisions behind these models. The first essays to describe this Catalan panorama were undertaken from a theological standpoint in 2003 and from a codicological and palaeographical view (yet without referring to the former) ten years later. The analysis of understudied and new fragments in combination with the rich tradition of donations of biblical manuscripts on occasion of church dedications allows now a denser biblical panorama in early medieval Catalonia. We know at least three Bibles who show the design of large-size Carolingian full Bibles with two columns and more than 40 lines per column. The most impressive copy is at the same time the oldest one: the still less known late ninth-century Urgell Bible La Seu d’Urgell, Biblioteca Capitular, Ms. 1.997, a local product imitating the model of the Tours Bible, not mentioned in Bernhard Bischoff’s catalogue of ninth-century Carolingian manuscripts. But we have also a Genesis fragment from another, Western Frankish giant Carolingian Bible (Vic, Museu i Biblioteca Episcopal, Ms. 255, I) from the later ninth century, known to Bischoff, but not dated to this century by him. A high quality-product of the scriptorium of Urgell Cathedral from the first half of the tenth century was the giant Carolingian Bible from which a Jeremiah fragment is preserved (La Seu d’Urgell, Biblioteca Capitular, Ms. 180. 1)

A just unknown facet of the history of the biblical legacy of early medieval Catalonia are the first autochthonous products from the tenth century, all scattered in fragments. The earliest Bible of Barcelona Cathedral from ca. 900 is known from some pieces from Judges and the Psalter (Barcelona, Arxiu Diocesà, Fragm. 32 and Fragm. 33). From the oldest Bible of the important Benedictine abbey Sant Cugat del Vallès (near Barcelona), written by the deacon and judge Bonsom at the end of the tenth century, we have a fragment from the books of Kings (Barcelona, Arxiu de la Corona d’Arago, Fragm. 250) showing yet the three column design of an old Spanish Bible typical also for the slightly later Ripoll Bibles. Finally, Girona also participated in the production of own Catalan Bibles as we can see from late tenth-century fragments from the Letters of St. Paul to Timothy (Girona, Arxiu Capitular, Fragm. 7) and the books of Kings (Montserrat, Arxiu i Biblioteca del Monestir, Ms. 821/V), as well as from an early eleventh-century Bible of which pieces of the Old and New Testament are also preserved (Montserrat, Arxiu i Biblioteca del Monestir, Ms. 821/II).

All this preparative work of copying and editing new Carolingian Bibles and further imports such as the extraordinary large-size, now fragmented French Bible of late tenth century (Vic, Museu i Biblioteca Episcopal, Ms. 255, II) were models for the magnificent Ripoll Bibles of the early eleventh century which build the bridge to the ongoing Catalan and European Bible production and which have attracted so much research interest in the last decades.

The contrasts between the biblical landscapes of early medieval Northern Spain and Catalonia are obvious: In the latter region, the introduction of the Carolingian minuscule as the new and exclusive script of books and documents is remarkable. It was obviously promoted by the importation of Carolingian manuscripts, including Carolingian Bibles from Catalonia’s metropolitan see Narbonne and other parts of the Western Frankish realm, which served as models for new orders of biblical books and texts. These imports nevertheless did not prevent hybrid solutions in the outer and inner design of the new Catalan Bibles which up to the eleventh and twelfth centuries still evoke memories of the Visigothic Bibles of Northern Spain such as selected books of the Old Testament in the Vetus Latina version or texts belonging to Isidore of Seville’s Bible edition. This interaction between imported manuscripts since the earliest times of Carolingian dominion and autochthonous products since the late ninth century is typical for early medieval Catalonia. Yet there remain open questions in this panorama: what exact role did the Church of Narbonne play in the transmission of the biblical text to Catalonia? Did Theodulf of Orléans’ Bible edition play a role besides Alcuin’s Bible? Only the systematic collation of the Catalan Bibles mentioned here and of hundreds of other biblical fragments will allow more insight into the ways of text transmission starting in the Frankish and Italian source grounds of the Carolingian Empire and beyond. 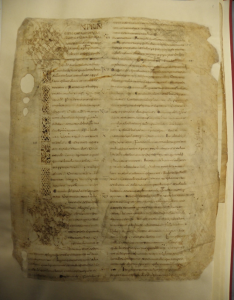 As we can see, there were not only watch towers in the Iberian border regions such as the Spanish March. In the hinterland of these border zones, the Christians also re-established a new religious territory of spiritual towers of faith. These uprising landscapes of new cultural and religious beacons in Cathedral churches and monasteries are the visible results of reusing the old models of the Visigothic Church in Northern Spain and implementing the results of the Carolingian Bible reform in an emancipating periphery of the Carolingian Empire. While different in their endeavours, both regions of the Iberian world shared the common aim of defending and re-establishing the Christian faith physically, culturally and religiously. If we conceive the Iberian Bible manuscripts as beacons of a cultural and religious renewal, a reconquest of intellectual territory and a reshaping of the collective cultural and religious memory, their tremendous size, elaborate page-design and rich illumination certainly displayed counter-models of what the dominant religious law and reference text in the Southern parts of the Iberian Peninsula was: the Qur’ān.