The Hungarian riders were one of the gentes whose own history was interwoven with the history of the Latin West from the first Empire through the Empire’s demise to the rise of a new Empire. Thus they had a considerable effect on these three western periods. The Annals of Saint-Bertin are the first source to mention the Hungarians in 862. The rather routine raids recounted in Saint-Bertin quickly transformed into an extraordinarily violent and pervasive threat to significant swaths of Western Europe. In 899, the Hungarians raided Northern Italy; in 904 they raided Bavaria and even destroyed a Bavarian army in 907. After attacks against Alemannia, Thuringia, Saxonia, the Saxons, and Hesse between 904 to 910, in 911 they reached what is today considered France. Here operations were initially smaller, but they quickly escalated, inflicting considerable devastation. A letter obtained from early in the tenth century recounts the gens Hungrorum in uniquely fine detail. The letter’s recipient was most likely Bischop Dado of Verdun (ca. 880-923), but unfortunately the letter only gives a vague hint as to who the author may have been. The best evidence within the letter is that the recipient was a member of a congregation of Saint Germain. Thus far, the prevailing consensus has identified the author as Remigius of Auxerre, but recently Charles West has convincingly argued that the letter did not originate from Saint Germain in Auxerre, but may well have been penned at Montfaucon on the Meuse instead. 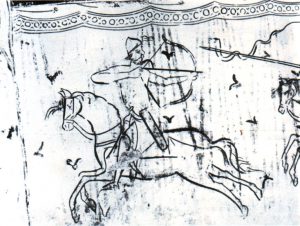 This particular letter offers a number of arguments as to why the Hungarians were not the same as the apocalyptic people of Gog and Magog. The author provides arguments against such claims with considerable skill. He begins by rebutting the claim that the use of the reflex bow would reinforce such identification: “if they (the innumeri in the regions of Verdun and Montfaucon) say that the Hungarians utilise bows and arrows against their pursuers’ lances, one must ask whether only the Hungarians utilised such armaments. In fact, almost all of the southern and eastern gentes, and also most of the other nationes made use of such armaments,” the author argues. Moreover, bows were also quoted in the Bible: Saul was wounded by an arrow shot by a Philistine and David was told that he should teach the sons of Judah to use a bow.

Compounding this argument, the author shows how Jerome’s letters expressly state that only the Jews and Jewish Christians (judaizantes) would equate the Scythians with the apocalyptic characters of Gog and Magog. Moreover any equation of the Hungarians with Gog and Magog is totally wrong, because the passages concerning these apocalyptic narrative must be interpreted allegorically, rather than ad litteram.

However, by referring to the fundamentals of Isidore of Seville’s claim that there were no people who were not already known, our author takes a further step towards the deconstruction of this ominous identification within the letter. Since the name of this people was not yet familiar, the Hungarians must have changed it at some point. The author refers to Virgil, “the names for countries or rivers or other areas usually change”.

At the end of the letter, the author provides an origin story of the Hungarians which he had heard from the elderly, and thus he did not know whether he was dealing with historia or fabula. According to this source a great famine plagued the provinces of Pannonia, Istria, and Illyria. Under the threat of imminent destruction, the principes of these areas decided that a significant part of the population, for whom they did not have enough resources, should be expelled, regardless of age and sex of the unfortunates and, if necessary, by force of arms.

The unlucky few retired to the east. They reached the Maeotic Swamps, as the story goes, where the majority of them perished from starvation. However, some of them, who possessed better physical and mental constitutions, survived and in the process learned a brutally effective technique utilising the reflex bow and arrows, which allowed them not only to survive, but also to thrive and to develop a rather large military force. Due to their starvation, they were appropriately named “Hungri” after the German word “Hunger”. However, archery was considered this new group’s specific and characterizing property.

This story provides us with a lot of interesting details. It resembles the origines gentium given in Jordanes’ Getica. There we find the motives of compelling parts of a gens (the Haliurunnae), a life full of deprivation in the Maeotic swamps, the fondness for hunting, which was the only skill they had, and the rise to a powerful gens, which threatened its neighbours.

The gens Jordanes was talking about were the Huns, who made perfect sense as a model for the Hungarians. The historia vel fabula of the Hungarians perhaps originated from Bavaria, a region which came into early contact with the steppe riders, and where the Hungarians’ developments were conspicuously remembered. The Bavarians might have known the original name of the Hungarians: the inhabitants of Pannonia, who were there before the Hungarians, could be identified as Avars, who were also called Huns, and who “vanished” in the ninth century by merging with the Slavs, whom they had once ruled. The demise of the Avars and the fact that many had indeed stayed behind puzzled contemporaries. In 870, for instance, the author of the Conversio Bagoariorum and Carantanorum named the inhabitants of Pannonia only as “the people that remained of the Huns and Slavs”. Obviously the Salzburg author did not know how to name these groups in the east. For the neighbors of these once powerful Steppe-people, the arrival of the Hungarians might be seen as the reappearance of the Avars under a new name. It was an apparent and logical explanation for the inexplicable demise.

Yet this explanation was evidently not apparent for our author from the west. He clearly says, “these people were called by a different name in the historical record and one does not recognize which people they are because their names have changed”. In order to underpin his argument, however, he needed reliable evidence to reinforce his claim, namely that these people were already known. Therefore he had to mention the Roman provinces of Pannonia, Illiria, and Histria at the beginning of the story. He actually chose a Roman framework in order to situate the origin of those people in the already known world. He distinguishes these “Proto”-Hungarians from the surrounding gentes, reinforcing the impression that these gens were offspring of the inhabitants of the aforementioned provinces. By constructing his argument in such a way, the knowledge of their original names was no longer necessary, for they were simply formerly inhabitants of the Roman Empire.

In a time when the imperial framework had disappeared, the impact of foreign peoples on the Latin West was perceived as especially dangerous. It therefore needed a careful and measured way of interpreting its significance for the Christian communities. The Letter about the Hungarians offers numerous insights in the topic of using and not using the past. As part of the After Empire project, we are therefore focusing on this source: a translation and an extensive commentary on this text is currently in preparation.