As I noted in my earlier blog post on Ratherius of Verona’s use of the concept of ‘patria’, I am working on identity construction in the long tenth century. At the start of the project I limited my research to the works by Ratherius, but over the past year I branched out to also include the vocabularies of belonging of two other bishops who were mainly active in North Italy: Atto of Vercelli (885-961) and Liudprand of Cremona (922-972). Additionally, I further narrowed down how I want to study the question of identity construction in the works of these three bishops. This blog post therefore offers a good opportunity to briefly lay out how I am approaching my sources.

The starting for my approach can be found in an article by Timothy Reuter. Its evocative title neatly summarises the framework from which I approach the question of identity construction in tenth-century sources: ‘A Europe of Bishops’. Reuter noted that studies on the Europe of ca. 1000 often focused on kings and kingdoms. He argued that Europe was at that time instead defined by a network of bishoprics, which were often much more integrated than contemporary kingdoms.

One particular strand of the traditional 10th-century ‘Europe of Kings’ narrative against which Reuter posited his notion of a ‘Europe of Bishops’ concerns the framework known as the imperial church system (or Reichskirchensystem). According to this model, there was a conscious policy under Ottonian and Salian rulers of founding their governance first and foremost upon the Church. The king systematically recruited loyal clergymen which he could install in bishoprics, and he de facto controlled episcopal elections. Although this model has suffered from sustained criticism since the 1980s, and is no longer conceived as a “system”, it has led historians to see the Ottonian bishop primarily in the context of his relationship to the king.

More recently, there has been a movement towards studying the discourse surrounding the episcopate, instead of approaching the bishop as a cog in the machine of royal government. Whether based on Foucauldian discourse analysis or more recent reflections on knowledge in the field of sociology, this more recent scholarship attempts to reveal how various discourses about bishops constituted power. One example of such a discourse is that of ‘the bishop as pastor’. As a recent study by Monika Suchan has shown, Carolingian bishops and rulers produced a discourse in which the relationship between their offices and the people were conceptualised as being akin to that between the pastor and his flock. The pastor has to look after his flock, and make sure that its members are able to acquire salvation. If he fails in his duties, his own  salvation is at stake. This discourse can be traced back to the ancient Near East, and endowed a leader-figure with what Michel Foucault called “pastoral power”: the ability (and duty) to admonish one’s flock when it was in danger of being led astray.

One of the questions that I will attempt to answer is how and when the efficacy of calls towards social integration through the evocation of notions of belonging depended on this rhetoric of the pastor. It has been argued that the discourse of pastoral power was a measure of political and cultural integration to Carolingian authors, and that the discourse lost a big part of its efficacy with the break-up of the Carolingian Empire. Yet the works of our bishops, and those of Ratherius in particular, are filled with admonitions – to kings, the clergy, and the populus of the diocese. Moreover, one example from the works Ratherius shows that the evocation of empire-wide, integrative notions of belonging could still be furthered by a claim to the pastoral power of admonition. In his Qualitatis coniectura cuiusdam (‘Examination of the Character of an Individual’, 966), Ratherius admonished Emperor Otto I that he ‘should set about turning first himself wholly to the good, then the imperium committed to him to the same good’. 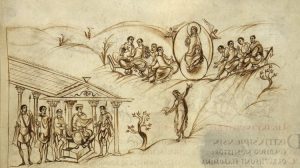 This illustration of Psalm 51 from the Utrecht psalter (early ninth century) shows Doeg the Edomite admonishing King Saul, standing between the king in the left of the picture and God and his saints in the upper right. It suggests how the Carolingians could have envisioned their bishops as “pastors”, endowed with the power and duty of admonition. Tenth-century bishops inherited this discourse, and similarily envisioned the relationship between their office and the populus of their diocese as resembling that between the pastor and his flock. Utrecht, University Library, Ms. 32, fol. 30r.

Besides studies on the discourse surrounding the episcopal office, scholarship on the construction of early medieval ethnicity has further shaped my approach to the question of the bishop as an actor in the construction of identity. One helpful concept that was recently applied to the question of early medieval ethnic identity construction is that of the cultural broker. First introduced by the anthropologist Eric Wolf and then further developed by Clifford Geertz, the notion of cultural brokerage was used fruitfully by Helmut Reimitz in his 2015 monograph on the construction of Frankish identity in the early Middle Ages. Geertz used the concept of cultural brokerage to describe the function of the Javanese Kijaji, local Muslim teachers, in post-revolutionary Indonesian society. Wolf envisioned the Kijaji as a specialist in the communication of Islam to the village peasantry, but Geertz saw a change in the role of this group of scholars. In an increasingly globalised world, where urban elites understand their metropolitan peers in different nations better than their peasant countrymen, a new leadership was needed to bridge the gap between a nation’s urbanised political elite and the masses. It were the Kijaji who took up this task: they became ‘cultural brokers’, being able to communicate both with the masses as well as with Jakartan and Surabayan urbanites. To Reimitz, the early medieval historians narrating Frankish identity were much like such cultural brokers, in that they ‘balanced’ a wide range of possible identity constructions. The most successful early medieval historians did not promote a single group, but rather placed themselves in the space between various groups as ‘cultural brokers’. From that position they were able to integrate various identities into a single framework.

The tenth-century bishop can be approached similarly. Bishops acted as the ‘middle men’ between various local groups within their diocese, but also at times functioned as mediators between local groups and more distant rulers, such as kings and emperors. A pertinent example of a tenth-century bishop acting as a cultural broker can found in Liudprand of Cremona’s account of his 968 diplomatic mission to Constantinople, the Relatio de legatione Constantinopolitana. Liudprand had been ordered by his emperor to arrange a betrothal between the future Otto II and Anna Porphyrogineta (963‑1011), the daughter of the then deceased former Byzantine emperor, Romanos II (938‑963). Liudprand narrates how he was forced to endure a sustained invective by the Emperor, which ended with the accusation that Otto I and his subjects were ‘not Romans, but Lombards’. In what is perhaps the most well-known example of tenth-century notions of identity, Liudprand replied: ‘We, that means the Lombards, Saxons, Franks, Lotharingians, Bavarians, Swabians and Burgundians, so disdain them that we utter no other insult than “You Roman!” to our enemies when aroused.’ Later in his account, Liudprand speaks of ‘our people’ (gens nostra), with which he means ‘any people that is subject to your [meaning Otto I’s] empire’. This shows how one of our three bishops attempted to integrate a multitude of different gentes into a single people, ruled by the emperor: this is cultural brokerage par excellence.

Liudprand’s brokerage took place on a macro-level; the intended audience of his account was the Ottonian court. Many examples of more local forms of cultural brokerage can be found in the works of Atto and Ratherius. In the sermons, letters, and moral treatises of these two bishops we see attempts at integrating a multitude of different social groups within and in the vicinity of their dioceses. As pastors bishops presented themselves as the fathers of the poor, and sought to integrate different economically defined groups around the episcopal city. It was to be a common patria to both the haves and have-nots. As cultural brokers they tried to navigate the complicated ethnic landscape of northern Italy, solving conflicts between different gentes and trying to mobilise various peoples around the wider framework of Italia. Over the coming two years, I hope to shed more light on how Atto, Ratherius, and Liudprand appealed to this wide range of ideals in their efforts to further social integration.