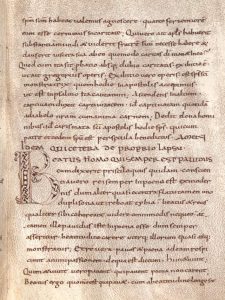 Although often dismissed as a dark “age of iron”, the tenth century has also been paraded as the period that laid the foundations for the birth of later nation states. After being spawned by the destruction of the Carolingian imperial centre, so goes this narrative, the territorial units of West and East Francia would eventually develop into the states of France and Germany. This framework has obscured the complexity of how identity was constructed in the tenth century. The central aim of the research done as part of the After Empire project at the Austrian Academy of Sciences is to go beyond this narrative of nation-building by re-evaluating how tenth-century authors constructed their identities through what we call “notions of belonging”.

These notions of belonging can be connected to ethnic and territorial names, as in “Francia” or “Gallia”, but also to social and political abstractions, such as “populus”, “gens”, and “regnum”. Instead of focusing on a single notion of belonging like that of “Francia orientalis”, and assuming that its use in our time period indicates the existence of a solid feeling of “East Frankish identity”, we seek to contextualise individual uses of such words: by whom was a given notion of belonging used, and why in that particular situation?

One word that has often been connected to the supposed inception of nation states in the tenth century is that of patria. Before the 1960s, some scholars tried to read a kind of “proto-nationalism” in Carolingian and tenth-century uses of this word. This approach has since then lost its currency. Yet more recent studies continued presenting tenth-century uses of this this term as being part of the same development that would eventually lead to the rise of European nation states. According to this narrative, tenth-century uses of patria do not show any kind of “medieval nationalism”, but the concept did contribute to a “first phase” of nation-building through its connection to greater political wholes, such as duchies and kingdoms.

Such an approach potentially disguises uses of patria that were inherently local in meaning, yet at the same time possessed political currency and functioned as important notions of belonging. Enter Ratherius of Verona. Born in the late ninth century in the city of Liege or its vicinity, he would become one of the most prolific writers of his time. He was deposed from his bishopric three times, and from that of Liege once, living large periods of his life in exile. His career ended in the late 960s, after he seemingly fell out of favour with then Emperor Otto I. Lacking the support of the emperor against the increasingly rebellious Veronese clergy and powerful local counts, he was deposed from Verona as an old man one final time in 968. 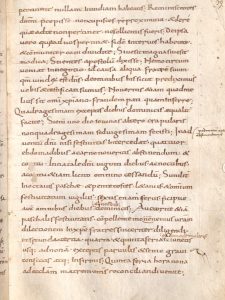 Ratherius’ self-identification does not revolve around a particular ethnonym or geographically-defined realm, but is indebted to a much more local notion of nativa patria, one’s “native land”. This is most clearly shown by a single turbulent episode in Rather’s career during the 950s. Ratherius had lost the bishopric of Verona in the 930s, and then spent several years in exile. His attempts at regaining the see of Verona were unfruitful, but in 953 his fortune took a change for the better: in that year, the see of Liege lost its bishop, and Ratherius managed to acquire it through his connections to Bruno, the brother of King Otto I. His luck was, however, short lived: in 955 he was again expelled, having fallen victim to political intrigue and, perhaps, also his own uncompromising temperament. Just after being forcibly ejected from the bishopric of Liege, Ratherius wrote down that the “people of my native country (populus nativae patriae), joined to me by the kinship of neighbourliness” had been “deprived of the office of their bishop”.

To Ratherius, his deposition from the see of Liege was made all the more perverse because of his personal belonging to the city and its inhabitants, the populus. His invocation of the nativa patria in the context of a high-level Church conflict suggests that this concept also held at least some political currency, and was not mere empty rhetoric. Yet unlike many earlier Carolingian authors like Alcuin, who could praise Charlemagne as a “pater patriae” or “father of the fatherland” and call on their rulers to defend the patria against foreign aggression, Ratherius does not connect the term patria to a kingdom or ruler. At those places in his works where he provides a context for the term, it is connected either to kinship, the see of Liege, or both.

A strikingly similar use of patria can be read in a letter sent to Ratherius by Everaclus, bishop of Liege between 959 and 971. Everaclus sent his letter at the very end of Ratherius’ career, in 968. In it, Everaclus invites Ratherius to visit his homeland, the nativa patria. He writes exultantly that this patria will welcome Ratherius with open arms, and that all belonging to both the secular and churchly orders of the city asked for his return.

That is not to say that Ratherius and Everaclus were unaware of different, broader, meanings of patria. In fact, based on their citations from this work, they were both familiar with the several meanings of patria present in Cicero’s Catiline Orations (63 BC). In this collection of classical speeches, Cicero connects patria not only to the city of Rome, but also to the entire Roman Republic: the patria communis. In his letter, Everaclus cites the one part of the Catiline Orations in which Cicero uses this concept of an all-encompassing communal fatherland. However, Everaclus made some changes to the original text. Most significantly, he turned Cicero’s patria communis into a nativa patria, effectively “localising” the meaning of this word.

These two bishops were thus aware of meanings of patria that could encompass much more than a single city, yet apparently saw little use in invoking these. One explanation for this reluctance might be found in the more widespread relative lack of kingdom- and empire-wide notions of belonging in tenth-century sources. As discussed by Simon MacLean in his earlier contribution, Ottonian historians like Thietmar of Merseburg attached surprisingly little importance to the Frankish past, which could have reflected a belief, at least up to the 960s, that Ottonian authority was provisional. Indeed an appeal to “Frankishness” is also conspicuously absent in Ratherius’ many writings to and on East Frankish rulers. In this context, calling Otto I a rex Francorum might have seemed just as implausible to some tenth-century authors as calling him a pater patriae, or the realm that he ruled the patria. This did not mean, however, that the term patria lost all importance to 10th-century authors as a notion of belonging. As the example of Ratherius shows, patria remained an important building-block of identity.