‘Charles’s stirrups hang down from Conrad’s saddle’. For the first ruler of the Salian dynasty, Conrad II (1024‒1039), to whom this proverb refers, Carolingian traditions mattered a great deal: Conrad reportedly visited Aachen soon after his election to take possession of Charlemagne’s throne and to emphasise his family’s Frankish roots. But the author of this passage, Wipo, a royal chaplain who recorded Conrad’s deeds, also wanted to make clear that Conrad managed to become a successful ruler through imitation of Carolingian models. As the Carolingian past mattered to the Salian king as well as to his historian, it is almost impossible to keep both aspects apart. Wipo was an engaged political thinker, influenced by classical historiographical writers such as Sallust. In his Gesta Chuonradi II, written shortly after 1040 under Conrad’s son and successor Henry III, he often expressed his ideas in exemplary fashion, by inserting speeches into his narrative, elaborating on rituals, and even including proverbs and poems. Still, the Gesta is a surprisingly understudied text, the historical depth and allusiveness of which still remains to be uncovered. A fitting topic to illuminate this is Wipo’s treatment of oaths, as oaths often figure prominently in historiography. Already in the ninth-century Royal Frankish Annals and in Nithard’s Histories, a tragic narrative line is drawn from the swearing to the breaking of an oath in order to explain – usually by the punishment of a perjured person – who was responsible for a conflict and why events turned out as they did. Wipo appears to have been familiar with such Carolingian models of “narrative justice”, but on a number of occasions he also displays a more complex and imaginative discourse on oaths and on their sophisticated uses. 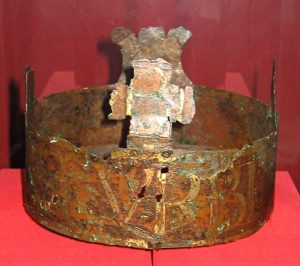 This is aptly illustrated by an allusion to Carolingian oath practice in Wipo’s account of the election of Conrad II at Kamba in 1024, which has been overlooked by modern scholarship. As he wants to depict this election as an ideal and harmonious act in what in fact was a extremely dangerous situation with potential of civil war, Wipo reports how right before the election Conrad (the Elder) and the other candidate, his cousin Conrad the Younger, negotiated about the conditions under which the defeated part would accept the winner being king. Conrad the Elder delivers a speech in which he praises the two brothers’ familiaritas and their amicitia cognata, as his whole speech is actually centred around the idea of the two candidates’ cognatio. Conrad the Younger, in reaction to this speech, promises to comply completely with what was said (totam hanc sententiam sibi acceptam fore), and that he, accordingly, if his cousin be elected king, would undoubtedly swear to him full royal fidelity (et omnem regiam fidelitatem facturum certissime promisit). Interestingly, he qualified his promise by adding that he would be faithful to King Conrad ‘as towards a most beloved cognate’ (sicuti cognato carissimo). Wipo goes on to say that Conrad the Elder when so speaking, as many could see, got closer for little while and kissed his cognate, by which kiss it was understood that both candidates had finally arrived at an agreement.

Much attention has been paid to this ritual and to the kiss, but what strikes here from a Carolingian perspective, is the oath formula to which Wipo was apparently alluding. Conrad the Younger promised fidelitas regia … sicut cognato carissimo, which seems to echo the oath formulas of the treaties concluded between the ninth-century Carolingian kings. In fact, starting from Charlemagne, quite a number of oath-formulas were constructed with such a sicut-clause, as I once called it, to specify the oath’s contents. As the Carolingian rulers promised each other mutual charity and loyalty ‘as a brother should show towards his brother’ (so famously in the oaths of Strasbourg in 842) or, in 845, ‘as a nephew towards his uncle’, the intention was to make fidelity and kinship converge. In 921, when there was no longer a Carolingian ruling over the East Frankish kingdom, the Saxon Henry I and the West Frankish king Charles III concluded a treaty in Bonn, where they promised each other under oath ‘to be a friend, as a friend should be towards a friend’ ‒ if you were not related to each other anymore, you could only be friends. But it seems clear that Wipo when writing about the two cousins called Conrad in 1024 must have thought of models from the Carolingian period when the rulers were still coming from the same family.

Reference to the dynasty and their members’ mutual affection should convey the idea that there still was some overarching idea of “brotherhood” or close kinship that allowed to conceive the divided Frankish kingdom as a coherent whole. Although concluded by two rulers, these treaties were often in fact multilateral agreements, as many lay and ecclesiastical nobles’ interests were at stake here, many of which transcended the political borders. But what was Wipo’s intention when referring to these ideas? It has recently been shown that in the wake of the forthcoming election of 1024, clerical and lay nobles were gathering information and arguments they thought could be put forward in favour of one of the candidates (or against an opponent) in the course of the negotiations. Detailed knowledge of Carolingian dynastic succession and moreover of the Carolingian divisions of the realm, was regarded as highly relevant in this situation. From such a perspective, one should indeed refrain from adopting the perspective of German constitutional historiography that the Ottonians simply gave up the Carolingian practice of dividing up the kingdom, which, as was believed, had become too small and consisted of five duchies alone. Quite the contrary, although the primogeniture principle of succession succeeded in the long term, it continued to be challenged early on. Wipo thus seems to have modelled the compromise between the two Conrads on the Carolingian idea of the realm being a community of closely related kings that came from the same family or dynasty – a familiarity strengthened by the bond of oaths. Focusing on the two cousins’ cognatio, he sought to understand the East Frankish kingdom as a peaceful, harmonious entity governed in concord by rulers that came from the same family. In so doing, he set the scene for the tragic history that would follow when King Conrad would have to fight against his rebelling younger cousin and others soon after. We know from the Annals of St Gall that already in Easter 1025 there was a first clash between the both cousins at Augsburg, as the newly appointed king was not willing to fulfil his younger cousin’s expectations or even promises he seemed to have given right before the election. Apparently the younger Conrad had expected to somehow participate in his cousin’s rule. But it was only in 1036 that Conrad the Younger became invested with the duchy of Carinthia, which he, according to Wipo, administered ‘being faithful to Conrad and his son Henry and serving well’ (fidus et bene militans imperatori et filio suo Heinrico). By referring to the Carolingian idea of joint rulership of two or rulers from the same dynasty, Wipo thus may have advocated the solution that king and duke came from the same family without causing a break-up of the kingdom.

It seems clear that Wipo did not simply invent his narrative parts dealing with oaths, but he shaped these narratives in exemplary style to convey his own vision of what politics should be like. In retrospect from the eleventh century, the Carolingian rulers could appear as “masters of the oath”, who forged bonds of fidelity between the rulers and their subjects, lords and their vassals and even between each other as rulers. Though it remains a challenge to trace the precise channels through which knowledge of Carolingian political thought and oath practice became transmitted to the first Salian ruler and to his chaplain, their reflection and sophisticated use of Carolingian models points to a consciousness of a new beginning which is often condensed in a renewed interest in the past.