Uses of the past, or responses to it, are not only to be found in historical narratives, but are also necessarily reflected in a society’s political institutions. The history of Ottonian queenship provides an interesting case in point, since we cannot begin to analyse it without taking a position on the debt it owed to its Carolingian antecedents. 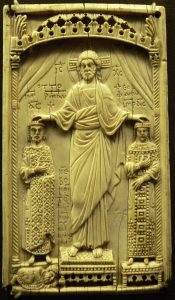 Ottonian queens were among the most powerful of the entire Middle Ages. Whereas the Ottonian kings were parvenus, dukes of Saxony who had made the jump to kingship, their wives were eminently royal: Edith, the second Ottonian queen, was an English princess descended (supposedly) from the seventh-century saint-king Oswald. Adelheid, who succeeded Edith as Otto I’s queen, was the daughter and sister of two kings of Burgundy; and daughter and widow of two kings of Italy. Theophanu, who married Otto II in 972, was a Byzantine princess. The Ottonians, unlike the Carolingians, thus married social equals – even, perhaps, social superiors. Accordingly, they also emphasised their wives’ roles as queens. Ottonian queens are prominent in contemporary narratives: the two biographies of Queen Mathilda (c.974 and c.1003) were the first written about a recently-dead queen in several centuries. They also appear as petitioners or intercessors in royal charters much more often than their Carolingian predecessors. There is little doubt that they were, in a substantial sense, rulers. While there are no queens regnant at this date in Western European history, Adelheid and Theophanu were immensely powerful during the minority of the young Otto III. Between 983 and 994, when Otto came of age, they were in effect the rulers of most of Continental Europe.

For modern commentators, the unusual strength of Ottonian queenship is symbolised by the attribution of a formal title which indicated their unique political position: consors regni or consors imperii – ‘sharer in the kingdom’ / ‘partner in rule’. This was a title with a long history. In the Late Roman Empire it was used for men, to associate sons as partners in their father’s rule – the junior emperor was the consors of the senior. It was sometimes used this way in the post-Roman period: there are similar examples from the Visigothic and Merovingian kingdoms in Spain and Francia; from the eighth-century Lombard kingdom in Italy; and at least one from the Carolingian Empire, where the Emperor Lothar is referred to as consors regni in the reign of his father Louis the Pious. The first use for a queen comes in the year 848, when consors imperii was used by Lothar to describe his wife Irmintrude. Thereafter the title was used more or less exclusively for queens – but only intermittently (maybe 25 times) before 960; and much more regularly thereafter. When used for queens, it is clear that the title was meant to evoke not only Roman imperial tradition, but also the biblical model of Queen Esther. In the Vulgate bible, Esther, consors regni, saves the Israelites from captivity via judicious intervention with her husband Xerxes, an act which ensured her a long afterlife as a model for early medieval queenship.

Does the prolific use of this title in the Ottonian period therefore indicate that tenth-century queens were the inheritors of a long-evolving tradition? Might we even understand their evident power as a consequence of their occupation of a formally defined office denoted by the title? Many modern observers have answered these questions in the affirmative, at least tacitly. We need, however, to look more closely at exactly when and how the title was deployed in the most numerous class of source, the royal charters. In particular, it is possible to argue that it served different purposes in the reigns of its three main wielders, the empresses Adelheid, Theophanu and Cunigunde.

Adelheid was the first queen to use the title regularly, beginning in 961, but it is worth noting that from then until Otto I’s death in 973 it is attributed to her only 17 times in nearly 90 appearances as intercessor in royal charters. Most, perhaps all, of these occasions can be connected with the propaganda war waged during Otto’s second invasion of Italy. Adelheid was highly significant in this campaign because she was the widow of a previous Italian king, Lothar. Ottonian apologists claimed that Adelheid had been the rightful successor to Lothar and that Berengar II, the incumbent ruler whom Otto sought to depose, was therefore a usurper. The insistence on the status of Adelheid as consors regni can be read in this context as part of an attempt to emphasise her royal status before audiences who had to be convinced, or cowed, into accepting the Ottonian narrative of the invasion. In the context of a violent conquest, the queen-as-consort discourse, with its echoes of Late Roman, Biblical and Carolingian models of authority, may have been intended to suggest antiquity and stability – to disguise sudden change with the language of tradition.

The consors title was attributed to Theophanu in 15 of her 76 appearances in the charters of her husband’s reign (973-983), suggesting that, post-Adelheid, such interventions were becoming a core part of the queenly role. If we pull these apart, it can be argued that the occasional use of the consors terminology was again intended to intensify performances of imperial majesty at significant moments. But the key context here was tension within the dynasty, especially the conflict between Otto II and his cousin, the duke of Bavaria Henry ‘the Quarrelsome’. Emphasising the royal couple as a ruling partnership was here part of a strategy to exclude Henry from a claim to kingship which, arguably, was as valid as Otto’s. 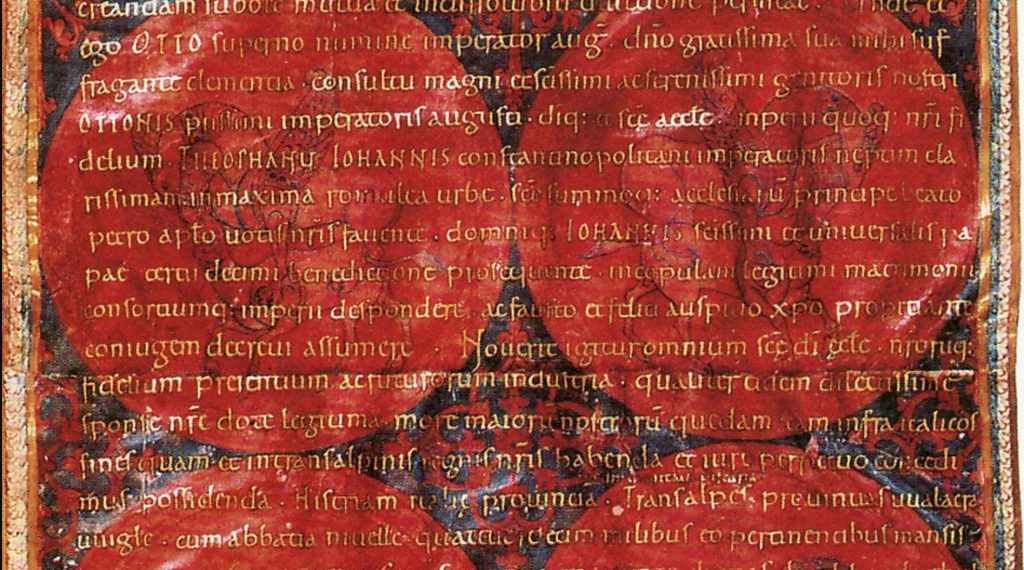 The third Ottonian empress to carry the title of consors regni was Cunigunde, wife of Henry II (1002-24). The pattern here is different again: whereas Theophanu’s ‘consortship’ was articulated in response to flashpoints of dynastic conflicts, ten of Cunigunde’s eleven appearances come in a single year at the very beginning of her reign. The explanation for this distribution must be linked to the controversy over Henry’s succession, which was the outcome of an extremely tense political crisis following the unexpected death of the childless Otto III. A series of texts from the early eleventh century imply that emphasising the queen’s status, including her descent from the Carolingians, was a key strategy of Henry’s apologists.

On closer inspection, then, the office of Ottonian queenship, insofar as we can examine it via the consors titles, did not have such a continuous history: the reasons for the representation of these queens in such terms were various, as were the circumstances and the intended audiences. That said, the persistent surfacing of those titles does shows the emergence of a relatively stable idiom for characterising the status of Ottonian queens which we could describe as an institution. That institution did not, however, grow organically from its historical roots, nor was its shape passively dictated by its own past. The consors regni concept was shaped and applied in a variety of circumstances which were generated in the first instance by contemporary politics rather than the inert weight of the past. That past was, in any case, highly contested: aware of the fact that the consors regni had in other times and places been a male ruler, Theophanu’s rival Henry the Quarreller tried to appropriate the status for himself. This contestability is perhaps one reason that Ottonian queens used the title relatively rarely. The histories of titles and institutions were not always so easy to control, even from positions of strength. The more past they had, the slipperier they could be.