The central aim of our Barcelona research project “From Carolingian Periphery to European Central Region: The Written Genesis of Catalonia” in the framework of the HERA-project “After Empire: Using and Not Using the Past in the Crisis of the Carolingian World, c.900‒c.1050 (UNUP)” is to show that it is indispensable for 21st-century Europe and its integral parts to make the rich Carolingian culture publicly accessible in a modern and innovative way.

Carolingian Catalonia in the Mirror of Manuscripts

The Carolingian legacy of medieval Catalonia is known only to some specialists of the Catalan academic system, has been shown only once in a more than short exhibition in Barcelona (winter 1999/2000), and has never been systematically studied in a comparative, Europe-wide manner. In other words, this early medieval legacy is almost unknown to the worldwide operating academic world and to the larger non-academic, but interested public. Nor has this culture ever been studied and shown as part of the larger movements of religious and cultural knowledge transfer between Central and Western Europe and the Mediterranean World in a period of transformation of the rising new Euro-Mediterranean societies. Medieval Catalonia was one of these new vibrant entities, growing out of a periphery of the declining Carolingian Empire, a middle ground between Latin Christian Europe and the Islamicate World of al-Andalus. We will thus present early medieval Carolingian and post-Carolingian Catalonia for the first time in its multipolar character of having always been a space of religious, cultural, social and political immigration and transition, intermediation and transformation. This region has been a vivid zone of passages between the North and the South of Europe, between the two Mediterranean Peninsulas, between the various Romanic, Germanic and Arabic peoples and cultures, and between Christians, Jews and Muslims. All these processes of transfer and transformation are readable in the Carolingian and post-Carolingian manuscripts of Catalonia. 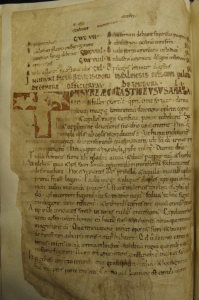 The long 10th century (900 to 1050) is the time of building a new common, but variegated European society after the Roman Empire, yet under new circumstances. The rise and fall of Charlemagne’s Empire goes parallel with further groundbreaking European-wide and especially Mediterranean developments. We see the establishment of Muslim dominions in the neighbouring regions around the Mediterranean Sea and the reorganisation of a balance of power between Greek Byzantium, the Latin Carolingian Empire and its successors, and the Arabic Muslim rulers in al-Andalus, Southern Italy, North Africa and the Near East. The Carolingians have favoured the ongoing Christianisation in form of mission and reconquest, the general expansionism of Latin Christian culture and various forms of religious life (such as Benedictine monasticism and the canonical life). In doing so, they have disseminated a new imperial, global, and seemingly uniform, but also eclectic and tolerant culture in the various social, political and juridical contexts of Europe. We call this common, but variegated culture “Carolingian” today. The presentation of the Carolingian culture of Catalonia in a European-Mediterranean framework can show the origins of our multifaceted Western culture in contact with the religious and cultural otherness of the Mediterranean World. Catalonia’s first medieval period of a rich history of religious and cultural entanglements and exchanges, but also of social and political emancipation is a historical showcase of Europe’s multiple identity at not only the beginning of the 21st century, but also in medieval times. The story of using the Carolingian past in the mirror of its relevant early medieval manuscripts for the creation of Catalonia’s own medieval and pre-modern identity has never been shown, not at least because of its special political fate within Spanish history since early modern times.

From all these observations, the Barcelona project is preparing a presentation of Catalonia’s Carolingian legacy for a broader academic and non-academic public in two steps.

1) We are developing an electronic platform with pictures, descriptions and bibliographies of the relevant manuscripts embedded in their historical context for an easy understanding of a wider, especially non-academic public. The manuscripts will be related to a map of their centres of production and storage in the Catalan episcopal sees and monasteries (Urgell, Girona, Vic, Ripoll, etc.), on the one hand, and in the counterparts of Septimania (Narbonne, Carcassonne, Aniane, etc.), on the other. A printed album of selected items representing the rich panorama of Carolingian medieval Catalonia will accompany this electronic publication. Hence, our work is collecting, describing and evaluating the manuscripts and fragments of not only Catalan archives and libraries, but also the many alienated items preserved in Spanish, French, Italian and other European and non-European collections. Our work, through preparing a still missing modern study of the early medieval scriptoria of Catalonia, provides an excellent opportunity to link our specific manuscript production with comparable manuscripts from other European regions across the long tenth century and with further electronically published material worldwide.

2) Our Barcelona platform will prepare a permanent virtual and physical exhibition of selected manuscripts at the hot spots of Carolingian culture of Catalonia (Girona, Ripoll, Vic, etc.) that will focus more on the special regional features of this introduced culture. Being a globalising phenomenon, the Carolingian culture comprehended all disciplines of knowledge ranging from the revived antique pagan and late antique patristic works to its proper production of literature. The transmission of Carolingian texts in early medieval Catalonia clearly reflects the history of this open space of communication between Gaul, Italy and the Iberian Peninsula. We thus find there items imported from other European regions of the Carolingian Empire as well as autochthonous products that emancipated in the course of the time from foreign influences without ever losing the connections to the mentioned regions.

A Vision for the Future

The further analysis in detail, going beyond our timely limited project, will give new insights into rhythms of reception, production and perception of various texts and text genres and thus develop a new periodisation of changing forces of identity building in early medieval Catalonia. Contributing to the central questions of UNUP, the project will ask how different pasts have been used and not used to model a new central social and political entity in post-Carolingian Europe. Our focus here will be on the role of cultural and religious memory in transforming medieval Catalonia through selective production and reception, if not manipulation of the Carolingian manuscript legacy. The further project will show how users of the texts dealt with the emergence of a plurality of claims about the norms governing a post-Carolingian society and created various forms of Carolingian culture and different strategies of identity building through these texts. By doing so, we will interrogate the older image of Carolingian culture as a homogenising culture of unification and unity, showing that in medieval Catalonia we face a complex process of palimpsesting cultures – Carolingian and Iberian, European and Mediterranean.