A thousand years ago, the inhabitants of Trier were confronted with their past in different ways. Not only through architecture and oral culture, but also through liturgy. During the services and offices of the church, one would not only hear about the life and sacrifice of Christ and about the mercifulness of God, but also about the local past and identity. 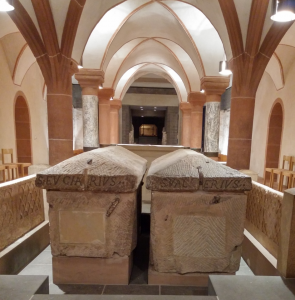 In my PhD research, I seek to map the various liturgical sources the people of Trier had at their disposal in the long tenth century. What past was communicated to the – mostly religious – audience and why? During the Mass and Divine Office, there was only limited space to enlighten the audience about the past. Within longer liturgical texts such as saint’s vita (life) – that told the story of a particular saint – and sermons, do we find traces of the local past?  Indirectly, however, I hope to discover some elements of using the past too. The liturgy for a particular feast was subject to many variations. Using certain prayers over others to celebrate a particular saint could imply a preference for certain authors or elements of the past, for example.

One of my case studies within this project, concerns a single manuscript (Wolfenbüttel, Herzog August Bibliothek, cod. Guelf 1109 Helmst.); a liturgical manuscript composed of various texts that was written in Trier around the year 1000. The manuscript contains saints’ vitae, liturgical chants, prayers for local saints as well as more universal saints such as the virgin Mary.

To give an idea of how the local past was incorporated into these liturgical texts, I will now turn to the liturgy of one particular saint venerated in this manuscript: the liturgy of the founding bishop of Trier, Saint Eucharius. In the Wolfenbüttel manuscript we find a vita, a sermon, a historia (liturgical chants for the office), another sermon and prayers dedicated to Eucharius, making it the most elaborate surviving corpus of liturgical texts for a local saint in tenth-century Trier.

In the vita of Eucharius and his two companions Valerius and Maternus, an account of their mission to convert Gaul and the Germanic lands is given. Eucharius, Valerius and Maternus are sent by the apostle Peter himself to Christianise these areas. On their way to Trier, Maternus dies from disease. Heartbroken, the two missionaries return to Peter in Rome. The latter gives them a staff with which they can bring their companion back to life. Indeed, when Eucharius and Valerius return to Maternus, Eucharius is able to resurrect him with the staff. Then, they arrive in Trier, where Eucharius performs some miracles. The past that is communicated through the vita is certainly one that goes back to the origins of Christianity. The direct relationship between Eucharius and his companions to the apostle Peter stresses the apostolic roots of Trier, making the audience aware of the authoritative position of Trier in Christianity.

The second text is a sermon on the epilogue of the vita just described. In this epilogue, the author regrets not being able to write up many miracles of the saints, explaining that Trier had been subject to a great fire that destroyed most of the material written on the miracles. The sermon following this epilogue explains that there had been three great fires in the city of Trier, caused by so-called ‘plagues’. God had sent the Arians, the Vandals, and the Huns to punish the people of Trier for their sins. These groups were active in the fourth and fifth centuries. Conspicuous by their absence, are the Normans, who raided Trier and imposed considerable damage on the town and its libraries in 882, only a century before this manuscript was written. The Norman raids and their destruction of the city and libraries do feature in other hagiographical texts written in this period, so why are they left out here? It is plausible that the author did not need to remind the people of Trier of this great destruction, it being part of collective memory. By explicitly naming the three earlier examples of God’s wrath, he let the audience connect the dots with more recent events. His message? If you do not improve your piety and venerate Eucharius, God will send enemies to destroy this city yet again.

A last example that shows how the past was used more subtly in the liturgy for Eucharius. In the vita, Eucharius and his companions are said to be sent to Christianise both Gaul (Gallia) and the Germanic lands (Germania). When we have a close look at the prayers sung at the matins of Eucharius’ feast day, Germania is consciously erased from the text when it concerns the areas to be Christianised. The phrase ‘above-mentioned regions’ (supradictas regiones) is transformed into Gallia, leaving out Germania. Although much about this element of (not) using the past needs more thorough study, it is clear that the author (and the person that made the erasure) wanted to convey selective elements of the past to his/their audience.

To conclude, through this small survey of uses of the past in Trier liturgy around the year thousand, it has become clear that there were several ways to communicate a selective past to the audience. And this is only the tip of the iceberg. In my PhD research, I hope to continue investigating the relationship between liturgy and the past in Trier in the long tenth century.