In 1920, the Society was once again anxious about the cost of publishing, and the ongoing deficit in the publishing account. This year it was particularly heightened owing to the aftermath of the war, which meant increases to printing costs and salaries, whilst the income of the Society remained static. As a result, the Council appointed an Emergency Finance Committee. 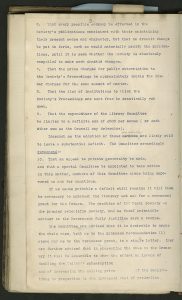 Several Fellows were appointed committee members, including James Jeans, who was current Secretary of the Society (1919-1929). The suggestions to counter the impending deficit on the Society’s general account that were adopted by Council included: transferring unexpended balances from government research grants to the general account; raising Fellows’ annual subscriptions to £5 (from £4); increasing new Fellows’ entrance fees to £20, (from £10; £1 covered by Fee Reduction Fund), £10 of which to be covered by the Society’s Fee Reduction Fund; allowing Fellows to receive A or B of Transactions and Proceedings only (except when approved by Council), rather than both A and B; raising the cost of public subscription to the Society’s publications by 50%; cutting the list of institutions receiving Society publications for free; limiting the expenditure for the Library Committee (for purchasing books); and making ‘an appeal to private generosity’. One of the biggest pressure on the Society’s finances was printing. This was partly owing to the work done on the International Catalogue, and on the Catalogue of Scientific papers – both of which involved collating a record of scientific papers alphabetically [or chronologically?], and were extremely expensive in terms of printing. Yet, the Society’s journals were also to blame. The Emergency Committee therefore suggested that ‘every possible economy be effected in the Society’s publications consistent with their maintaining their present scope and character’. The Society was unwilling to drastically change the Transactions, for instance by imposing strict page limits; this was seen as an unnecessary risk to the purpose and scope of the journal.

This episode in the Society’s history is important, not because of the effect these changes had on income – the Society continued to lose money on its publications – but, rather, because it signified a slight change in the Society’s attitude to finances. While the Society had historically relied almost completely on donations and grants in order to cover costs, never paying much attention to its income stream, it was now attempting to increase its income by raising Fellows’ contributions and the sale price of its journals. The results were not enough to propel the Society into an income-generating model, but they were a sign that some at the Royal Society were willing to think more commercially about the Society’s publishing activities. Commercial agendas would not have any great effect on the Society’s finances until much later in the twentieth century.