The rising costs of publishing the Philosophical Transactions was causing considerable anxiety at the Royal Society. In 1895, the Senior Secretary, physicist Lord Rayleigh (John Strutt) took steps to increase the Society’s capacity to finance its publication. He wrote to Her Majesty’s Treasurer describing ‘the financial difficulties attending the adequate publication of scientific papers’. Scientific journals and their publishers were finding it almost impossible to be commercially successful. There was limited readership owing to the specialization of science, which meant that readers were unlikely to buy publications, like the Philosophical Transactions, covering the whole of science. The cost of illustrations was also very high, but Rayleigh considered them essential for effective scientific communication. The Society had struggled so much that in some cases it had even rejected papers despite them being worthy of publication. It was not only the Royal Society that was struggling to meet costs, but all scientific publishers, including learned societies, specialist societies, and even commercial publishers. Learned societies bore much of the burden so Rayleigh proposed a grant of £2000 or £1000 annually to aid not only the Royal Society’s activities but those of other societies. A grant of £1000 was given, and the Society began to administer it to needy Societies and publications, as well as using it on its own publications. In 1925 H. M. Treasurer asked the Society to receive an increased grant of £2500 annually, administering it to other Societies in need. The Society agreed, becoming a tool for the government’s support of scientific publishing.

The fact that the Society had to request a grant for publishing was a reflection of its financial model at this time. Rayleigh’s request was the consequence of a wider ethos of free circulation, which meant that the Society rarely made money on its publications. Every Fellow received a free copy of the journal, and authors received upwards of 100 copies of their papers. Exchange and gift lists also meant many institutions throughout the world had copies of the Society’s publications. Rayleigh wanted to maintain this generous, and even philanthropic, approach to science publishing, but the Society was struggling to do this without assistance. The grant also marked a new role for the Society: by administering the grant to other societies for their publications it meant that the Society was aiding a non-commercial approach to British learned society publishing. This atmosphere of generosity would eventually shift, but not until the late twentieth century. 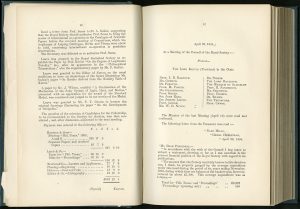