If you visit our home page, you can see the visual changes over time. First, the journal was of course black and white, with illustrations inside the journal rather than on the front page. From the 1990s, visual imagery on the cover became important and today glossy images draw the eye to the journal. It is interesting to note that for most of its long history, the Transactions remained visually the same, but since 1990 it changed numerous times. Today, each of the 11 journals have their own visual look, but each carries the Royal Society logo and specific fonts. Similarly, the Royal Society publishing website is becoming increasingly important as more and more readers access the journal online (where a lot of the content is also free). Images online do not always translate well from the printed page, and discussions have been had about using video and more modern tools to illustrate journal articles.

Printing the Society’s publications fell to a relatively small number of printers in the nineteenth and twentieth centuries. The Society tended to stick with a printer for several decades before changing, sometimes in order to get a reduced price, or on some occasions to receive better quality productions; the interplay between cost and quality was never clear cut and was often complicated. It is thus significant that in 1934 the Council of the Society appointed a Publications Committee to enquire into and report on the paper, printing and engraving of the Society’s publications. The Committee’s report was based on considerable research into the production processes and materials used for the Society’s publications by the Committee members. As indicated, this was all based on interviews with printers, paper-merchants, and event visits to the production sites in some cases. The report sent to Council addressed paper quality for text and images; the quality of blocks for printing images; processes used for printing and engraving; types of ink; the quality of wrappers for binding publications; and typographical styles.

As well as suggesting that the portraits for obituaries should now be done by the photo-litho-offset process (cheaper than photogravure process), the Committee suggested better quality paper should be used for the Society’s publications, including for printing images, which would cost an extra £150 per annum for text and 20-25% more for images. In fact the Committee were privy to knowledge that there had been complaints (presumably from authors) that the reproduction of images was unsatisfactory. The problem was partly related to bad printing, for which the Society’s printer of 56 years, Harrison and Sons, was responsible. But bad printing blocks were also to blame, as well as poor quality drawings. Yet, Harrisons ‘frankly admitted that some of the printing has been unsatisfactory, and “would assure us that every care will be taken to maintain a high standard of production”’. With Harrisons’ assurance, and a promised 7-8% reduction in costs for the Society, Harrisons were kept on as printer, but the ‘quality of their work’ was to be reviewed a few months later. The following year saw a permanent Publications Committee formed to meet annually to discuss and report on the text, paper and printing of publications.

The dissatisfaction with Harrisons is perhaps unsurprising when we realize that Harrisons was not particularly skilled in scientific printing. It is known most for the printing of H. M. stamps, and for acting as official printer to a number of government departments [ref to Harrisons biog.]. In this way it contrasted with the Society’s previous printer, Taylor and Francis, which was a major printer-publisher of scientific print throughout much of the nineteenth century. By transferring printing from Taylor to Harrisons in 1877, the Society was compromising quality for the reduced cost that Harrisons, as a much larger printer, could offer. But by 1934, the Society was beginning to question whether the quality of printing offered by Harrisons was sufficient. In fact, despite continued struggles with the rising cost of publishing, the Society adopted the Publications Committee’s somewhat costlier recommendations, showing that quality trumped cost in this case.

The Royal Society have used a number of printers since the beginning of its journals. In the early 1930s the Society had started exploring new printers again, after years with Harrisons. After a tender competition in 1935, the Society hires Cambridge University Press (CUP). The fellowship had many links with CUP, including FRS and Biological Secretary Archibald V. Hill. Our research shows that Hill was very involved in the decision to move printers, and that he took control and showed interest in publishing at a time when other officers did not. The documents below show the Publications Committee’s decision to hire CUP. 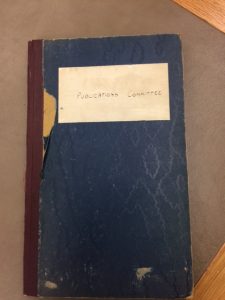 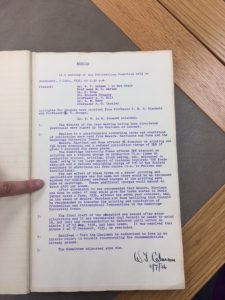 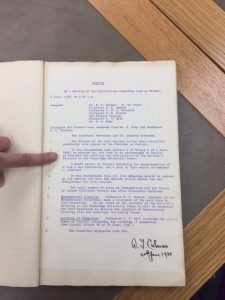