Our project began with the aim of studying the 350-year history of the Philosophical Transactions (and only later expanded into a study of Royal Society publishing, and academic journals in general).

We have, therefore, written about the history of the Transactions many times, for various contexts. This page offers a moderately-brief version of the history; there are links to further detail about each century’s history (originally written as snapshots at 50-year intervals).

For the anniversary celebrations, we curated an exhibition at the Royal Society – and the booklet/catalogue accompanying that exhibition offers an alternative (and well-illustrated) account of the history of the Transactions.

Philosophical Transactions, the world’s first and longest-running scientific periodical, began life in 1665.  Though always associated with the Royal Society of London in the minds of its readers, it was in fact the initiative and personal property of the Society’s first Secretary, Henry Oldenburg, a native of Bremen, who drew on the office of Secretary, his own prodigious network of natural-philosophical contacts, and his considerable skills as a linguist to produce the material that became the Philosophical Transactions.  The early journal consisted of letter-excerpts, reviews and summaries of recently-published books, and accounts of observations and experiments from European natural philosophers.  Though a number of early pieces – mostly of an astronomical and mathematical nature – were printed in Latin, the principal language of the journal was English. After his death Philosophical Transactions passed through the hands of a series of subsequent editors, usually also Secretaries of the Society (some of them, such as Edmond Halley or Hans Sloane, very well-known to the annals of science), and a succession of printers.  During this time – up to 1752, when the Royal Society took over financial responsibility for the journal – the form and content of the Transactions altered in ways that broadly reflected the priorities of the various editors, and to some extent those of the Society as well.

Learn more about how the Transactions operated in 17th and 18th centuries. 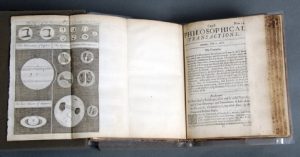 After the Society’s takeover, the processes of publishing an article in the Transactions were gradually formalised.  These included norms for submission and evaluation, including systematic peer review by the middle of the 19th Century; as a result the stamp of the individual editor which can often be discerned in the early journal disappears as editorial responsibility was transferred to a Committee of Papers .  Despite the emergence of numerous other learned societies and research institutions in Britain in the late 18th and throughout the  19th Century, many of them with avowedly dedicated to a single branch of scientific knowledge (such as the Astronomical Society or the Geological and Chemical Societies) and many of them with their own periodicals, the Transactions remained a determinedly generalist publication, resisting moves towards greater specialisation until 1887, when the journal finally bowed to the inevitable and split into two series, ‘A’ and ‘B’, for the physical and biological sciences respectively.

Learn more about how the Transactions operated in the 19th century.

The 20th Century saw further changes to the content of the journal, although the link with the Royal Society’s own scientific activity was maintained.  The journal, always a drain on the Society’s resources, began to feel more urgently the pressure from the proliferation of scientific journals from commercial and university presses, and the Society’s various deliberations about the Transactions during this period reflect the delicate balance to be struck between the journal’s (and the Society’s) prestige and its commercial interests, particularly the difficulty of keeping a generalist journal competitive in an increasingly specialist market.  The Society’s Committee of Papers was finally abolished in 1990 and responsibility restored to individual editors; a model that prevails to the present. The journal first went online in 1997, and the entire back issue archive to 1887 has been freely available since 2010.

Learn more about how the Transactions operated in 20th &  21st centuries. 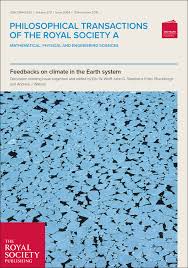 During its long life the journal has published papers by many of the great names in the history of science. Yet behind the list of famous names, or the celebrations of 350 years, its fortunes fluctuated. It has survived crises in the Royal Society, many changes of editorship, and has navigated the changing patterns of scholarly authorship and readership, and, of course, with the vagaries of the print trade.