‘Publishing the Philosophical Transactions’ was funded by the Arts & Humanities Research Council, from 2013 to 2017. The research was undertaken by a team of cultural historians led by Professor Aileen Fyfe of the University of St Andrews, with generous advice and assistance from the Publishing team and the Library & Archives team at the Royal Society.

Most of the team have now moved on to other things, but there are various research papers still in progress, and we are writing up the book-length history, provisionally titled The History of the Scientific Journal. Our publisher is hoping to receive it in 2019…

During 2015, we participated in lots of events tied to the Royal Society’s ‘Publishing 350’ campaign. We organised an academic conference and a public exhibition.

In 2017, we collaborated with others who work on scholarly communications and academic prestige, to produce a briefing paper explaining why understanding the history matters to planning the future of academic publishing. We are delighted that Untangling Academic Publishing: A history of the relationship between commercial interests, academic prestige and the circulation of research has had such a wide readership! 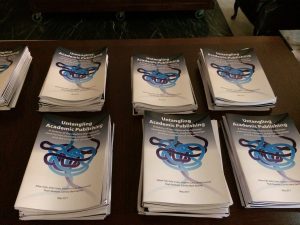 On May 25, 2017, launched a policy briefing paper using our historical perspective to reflect on the current challenges facing academic publishing; “Untangling Academic Publishing”. The lecture was live-tweeted and you can find the live tweet here: https://storify.com/AHRCPhilTrans/getting-started You can find the entire report free here: https://zenodo.org/record/546100#.WSvrNcm1uRu

In 2015, we ran an academic conference, and curated an exhibition at the Royal Society.  A special issue of Notes & Records of the Royal Society features essays on 350 years of scientific periodicals. In 2016, we hosted a fascinating one-day interdisciplinary discussion workshop on ‘The Politics of Academic Publishing, 1950-2016‘, at the Royal Society on 22 April 2016. You can hear Aileen Fyfe interviewed on the PLOScast, about the history of scientific publishing and peer review (April 2016). Follow us on Twitter at @AHRCPhilTrans.

Our project will write the definitive history of the commercial and editorial practices of the Philosophical Transactions. It will also use the Royal Society’s archive to compile a series of historical economic data series relating to the book trade, which will be freely available online.

Studying the world’s oldest scientific publication raises a host of fascinating, cross-disciplinary questions. Our project is exploring it all, including the varying stages of publication of the Philosophical Transactions, which can be roughly divided into four periods:

But neither the continuing vigour of learned society journals in general, nor of the Royal Society’s journals in particular, can be taken for granted: the Royal Society itself, for instance, came under vigorous criticism in the early nineteenth century for failing to support professional scientific experts, while its journal was simultaneously under pressure from a range of new competitors. Both the Society and the Philosophical Transactions survived, but such episodes enabled us to look critically at the contingent development of the processes and practices that are now taken to be essential to the operation of modern scientific research. This project is firmly historical, but, by touching on issues at the heart of the knowledge-based economy, it has substantial contemporary relevance to a wide audience of policy makers, educators and campaigners (explore our public engagement work in the ‘About our project’ section of this website!)

The origins and function of Philosophical Transactions in the newly-founded Royal Society in Restoration England have been repeatedly discussed by historians of early modern science. The literary qualities of its articles have been extensively analysed by literary and communications scholars, interested in the rhetoric of science. Its citation patterns have been studied by sociologists of science as evidence of the functioning of past communities of scientists. But no one has yet used the Royal Society’s archival materials to investigate the commercial, economic and editorial practices which lie behind the published pages, and no one has tried to take a longer historical view. We are uniquely placed to do this, because we are an interdisciplinary team focusing on different periods and subjects in history, and because the available material is so vast and exciting!

The Royal Society has an extensive and fantastic archive. In fact, it is so big that many of their more modern sources are kept off-site, in a salt-mine in Cheshire. We made good use of all these materials. No other scholarly journal – or periodical of any type – has an archival record for such a long period of time! Following the fortunes of one periodical through three and a half centuries offered us a structuring narrative for the British book trade from the Restoration, through the development of modern publishing in the eighteenth and nineteenth centuries, to the era of electronic publishing.

But we have also used other sources! With kind help from the Royal Society we have interviewed former staff members, editors, authors, referees and others who could give us first-hand knowledge about the modern and contemporary history of the journal. Using a ‘snowball’ model of sourcing interview subjects, we met many people with fantastic memories and facts that they shared with us. This has illuminated the modern chapters of the book, and filled in gaps where the archives were restricted.