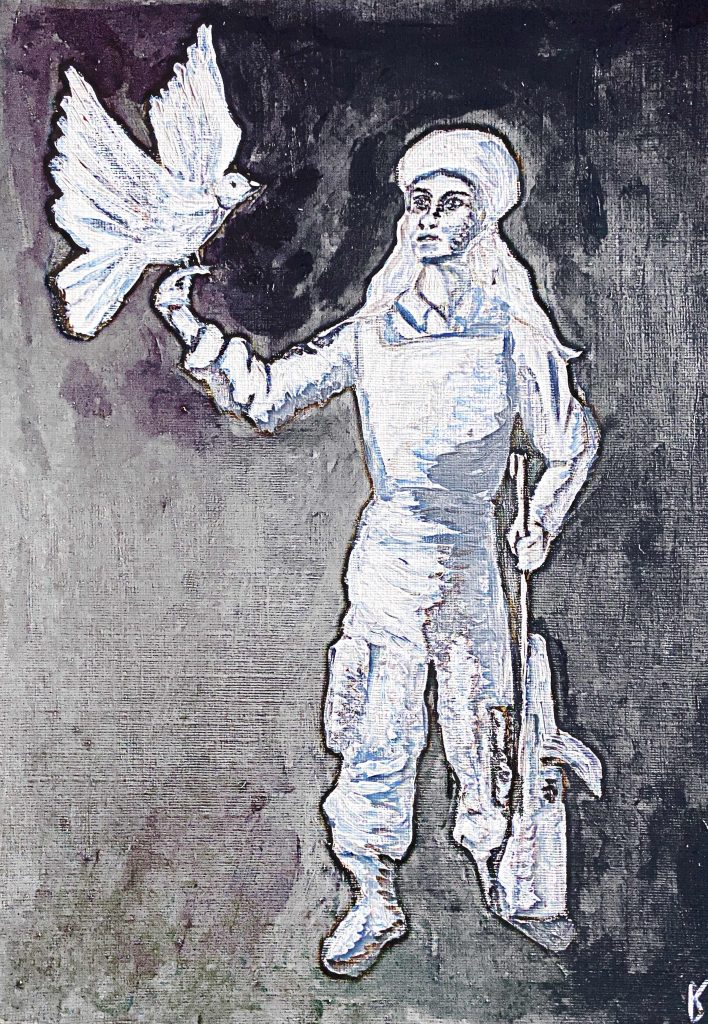 ‘War?’ by Katarina Birkedal. The Prima Porta statue of Augustus still shapes our views of military honour and victory. This version stands as a query to that, bringing to the fore the many contradictions inherent in our understanding of war.

In my previous thought piece, I sought to deconstruct what exactly we mean by ‘visualising’ war; in this piece I want to make sense of the second word in the project title: ‘war’. War is one of those phenomena that most people know very well without being able to succinctly define. Indeed, our cultural preoccupation with war is such that Christopher Coker claims that ‘[…] in the word “peace” there is a paradox. Whenever we see it in print we think immediately of war.’[i] But can we synthesise all that the term ‘war’ might denote into one concrete definition? More to the point, should we?

Opening the Oxford English Dictionary’s entry on ‘war,’ we find: ‘Hostile contention by means of armed forces, carried on between nations, states, or rulers, or between parties in the same nation or state; the employment of armed forces against a foreign power, or against an opposing party in the state.’[ii] According to the Cambridge English Dictionary: ‘armed fighting between two or more countries or groups, or a particular example of this’. Merriam-Webster: ‘a state of usually open and declared armed hostile conflict between states or nations’.

This understanding of war as a pitched, declared thing that occurs between two or more states (or between groups within a state in the case of civil war) fits very well with what we are taught, in school and in the cinema. It fits with our Weberian conception of the sovereign state as having a monopoly on (‘legitimate’) violence; our Clausewitzian view of war as the ‘continuation of policy by other means’; and our cinematic understanding of combat as a relentless battering of matched opponents. Alice König’s recent blog post shows us how these war stories have become expected and self-perpetuating, but also how they leave out the experiences of so many who find themselves caught up in armed conflict.

As a student of International Relations (IR), I studied war from several different angles, theoretical and historical. When I took an undergraduate module entitled ‘The Changing Character of War’ (based on the research project by the same name), I learned that war is a beast both dynamic and never-changing; as a PhD candidate, I looked at how the myth of war is part and parcel of most popular culture. Yet – however much I remember reading as a first-year student that war is ‘armed conflict with more than 1000 casualties’ – I still struggle to define it in any way that pays homage to the complexity of its causes and consequences.

Given war’s presence in history, can we perhaps draw a distinction between modern and ancient wars? The old/new wars thesis, as posited by Mary Kaldor among others, has gained much traction as well as much opposition. Are ‘new’ wars more asymmetrical? More inclined to wound and involve civilians? Are they more motivated by greed than grievance?[iii] Whilst it is undoubtedly true that war is an ever-developing phenomenon, this idea of ‘new’ and ‘old’ is unnecessarily dichotomising: war has always been multifarious; war costs, and as such its presence is felt in/on all areas – on the human body, on the landscape, on our narratives about the past, present, and future – in different ways.

In Critical Military Studies, important work is being done to further our understanding of how war impacts society on all levels, especially the everyday; how martial politics work to ‘[reify] identity binaries, casting each group in distinct roles of heroism, patriotism and sacrifice against defined others.’[iv] While the UK has been engaged in warfare for the better part of the last several centuries, for most of us this has had very little impact on our everyday; the same cannot be said for those with whom we have been at war. This juxtaposition points to an aspect of war that is rarely depicted: that of its mundanity, how it sneaks through the cracks of the everyday to become normal, whether as uniformed bodies on university campuses or in the absurd horror of satirical cartoon comparisons of US drone strikes and Dengue fever-carrying mosquitos.

What these ways of thinking about war do well is to bring attention to the multifarious ways in which war affects society – beyond the traditional conceptions of it outlined above. Through this critical lens we can see how much war transgresses the boundaries of the battlefield and the generals’ strategy rooms. To study war, then, we must pay attention to war’s slippages, how it seeps into our cultural expectations, into our perceptions of self and other, and how it forms our predictions of the future as well as our understanding of the past.

As well as asking what war is (where it plays out, and what are its contours), we must also ask who defines war, how the language of war is used, and who are its beneficiaries. The language of war is powerful and inherently political: it draws on all of our cultural understanding of war as coherent, matched, and declared. As a result, the term ‘war’ and its co-relatives can cover a multitude of sins; for example, by using the language of civil war and insurgency, General Efrain Rios Montt was able to disguise the genocide committed by the Guatemalan state against the indigenous Mayan population behind a veneer of legitimate state violence.[v] If we as academics study genocide under the umbrella of ‘war studies’, do we not then lend credibility to those narratives that seek to undermine genocide’s horror?

War is messy, both in practice and in defying neat categorisation. The names used to categorise its variants emphasise this. We often talk sweepingly of ‘civil war’, for example, as if it is a stable and easily definable concept; but from the ancient world to the present day, people have wrestled with the difference between stasis (civil discord) and polemos (war ‘proper’). Roman historian Tacitus named a third category when describing a period of time which saw bella civilia (‘civil wars’), bella externa (wars with foreign enemies) but above all bella permixta (a mix of the two).[vi] Is this a good description for what we see in Syria today? A so-called civil war that began with anti-government protests but has developed into a proxy war, involving a mix of domestic and foreign forces, with repercussions well beyond Syria’s borders. And what about those less tangible ‘wars’: the ‘war on terror,’ the ‘war on drugs,’ the ‘war on COVID-19’… Undoubtedly, these have also seen many casualties, whether by police brutality, drone strike, disease, or anti-Asian racist violence. But are they wars when they are not met on the battlefield, army against army?

The slippage of the concept of war brings to the fore its complexity. The Visualising War project is well-placed to tackle this slipperiness, as it is focused on the stories we tell of it – and how these stories shape us and shape war itself. We ask, for example, what ancient traditions inspired Shakespeare to write Henry V’s speech to the governor of Harfleur, where he likens the threat of violence to the city to the rape of women by invading soldiers? How does this gendered language of war lay the groundwork for the othering of those who were our neighbours, or for the treatment of women in war zones?[vii] What classical understandings of honour and valour resonate when we watch the stand of the Spartans in the film 300 – and how might they manifest in day-to-day life when we have left the cinema? How do images of the ruins of the cities of Aleppo and Homs register in a culture used to associate ruins with civilisations long lost – and not with present and preventable loss of security and stability? What does our use of the language of war do to our perceptions of other kinds of conflict and violence?

Through cross-disciplinary teamwork, we can study war beyond the remit of the military historian’s focus on numbers and tank formations, the IR scholar’s knowledge of decision-making processes, the art historian’s interest in visual renditions of war, the classicist’s reading of ancient epic paradigms (etc.), moving into an interdisciplinary space in which these and other knowledges are put into contact with each other to form a more complete and complex picture. This interdisciplinarity is important for the destabilisation of traditional (often patriarchal) conceptions of war, offering instead an approach that pays attention to the silences as well as the stories drummed into our subconscious through years of schooling/museum visits/cinema experiences. The Visualising War project is interested in the military partner as much as the decorated officer; the camp sex worker as much as the cavalry charge; women’s perpetration of violence alongside women’s victimhood; the trans and genderqueer experience of the military (historically and in present times) as well as the hyper-masculine hero; fantasy battles as well as trench poetry; the anticipation of violence,[viii] not just the suffering caused by it; the whole spectrum from street clashes to pitched battle and organised campaigns, but also peace-making, conflict resolution and the aftermath for ordinary people.

By seeking thus to destabilise the typical stories told of war, Visualising War bids us examine both how we read and how we speak war. In so doing, we hope to inspire a reconsideration not only of what we understand war to be but also of what we understand war (in its many forms and effects) to do. Above all, we seek to show that our habits of imagining war not only shape our view of the past but also shape war’s present and future. They not only influence how we define it with words but how we perpetrate it in practice: the forms that ‘war’ takes in space and time.

Postdoctoral Researcher Katarina Birkedal obtained her PhD from the University of St Andrews in 2019. She works on gendered experiences of conflict, manifestations of militarism in popular culture, and the aesthetics of depicted violence. She is using her experience of working across different disciplines and art forms to bring together members of the Visualising War research group who work in very different fields to enhance the project’s interdisciplinarity.

[vii] See Dubravka Žarkov, The Body of War: Media, Ethnicity, and Gender in the Break-Up of Yugoslavia (Durham and London: Duke University Press, 2007).