The Visualising War podcast recently interviewed artist Diana Forster about the war stories that she communicates through art.

Diana’s mother was Polish, and during WW2 she and her family were taken captive by Soviet forces, forcibly displaced from their home and imprisoned for two years in a labour camp in the Arkhangesk region in northern Russia. Diana’s conflict art focuses on what life was like for her mother and other Polish families in that camp – and subsequently, on the long journey that many of them took following their release, through Uzbekistan, Tajikistan, Iran and Karachi to the east coast of Africa, where they sat out the rest of the war in places like Tanganykia (modern-day Tanzania).

In contrast to much war art, which has traditionally focused on armed forces and scenes of combat, Diana’s work consciously narrates the everyday experiences of ordinary people impacted by conflict. It is exquisitely beautiful, drawing viewers in with delicate shapes and charming colours, rather than repelling or horrifying us with brutal images. Take, for example, her piece Cabbage Patch: 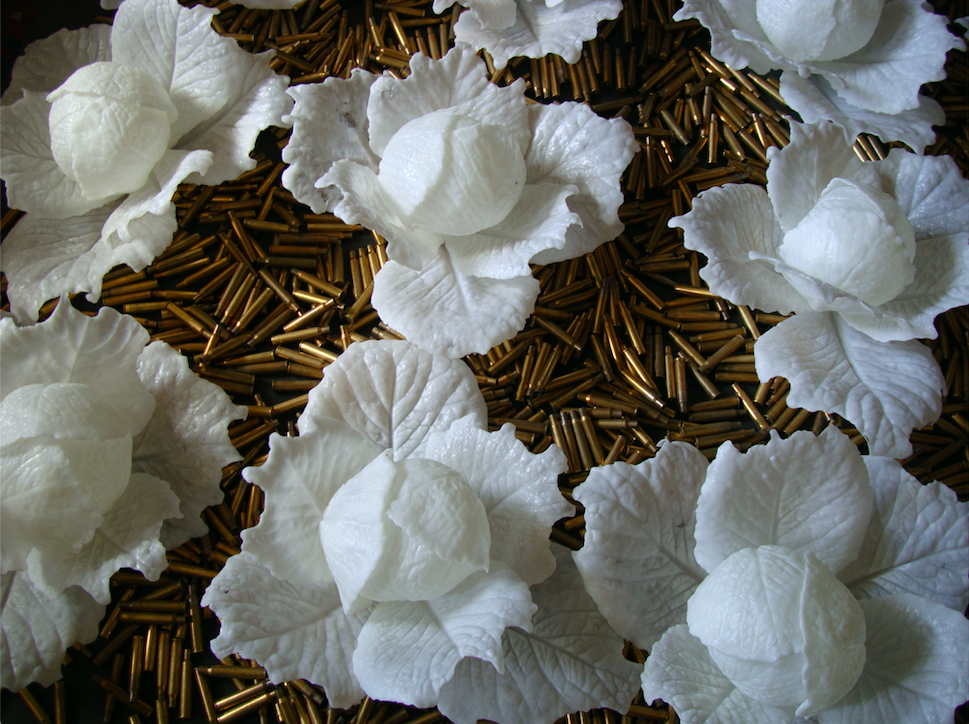 This was made in response to a story Diana’s mother told her about life in the labour camp. The inmates were starving, while the guards grew cabbages which the detainees were not allowed to eat. The young inmates would crawl on their hands and knees under the fencing at night to nibble the cabbage leaves. The guards assumed it was just animal damage and no one was punished. The beauty of the cabbages in this artwork is what strikes most viewers first; but the spent cartridge cases underneath jar with the cabbages’ delicate charm, prompting closer inspection – and so the meaning of the piece starts to unfold. For Diana, this is one of the strengths of art as a form of storytelling: the way in which it allows viewers to approach at their own speed and gradually uncover layers of meaning. This contrasts strongly with our experience of visualising war through epic war films, for example, where stark images of conflict flash past our eyes making an immediate impact.

This next image shows two of six panels which tell the story of the deportations from Poland and arrival at the labour camp: 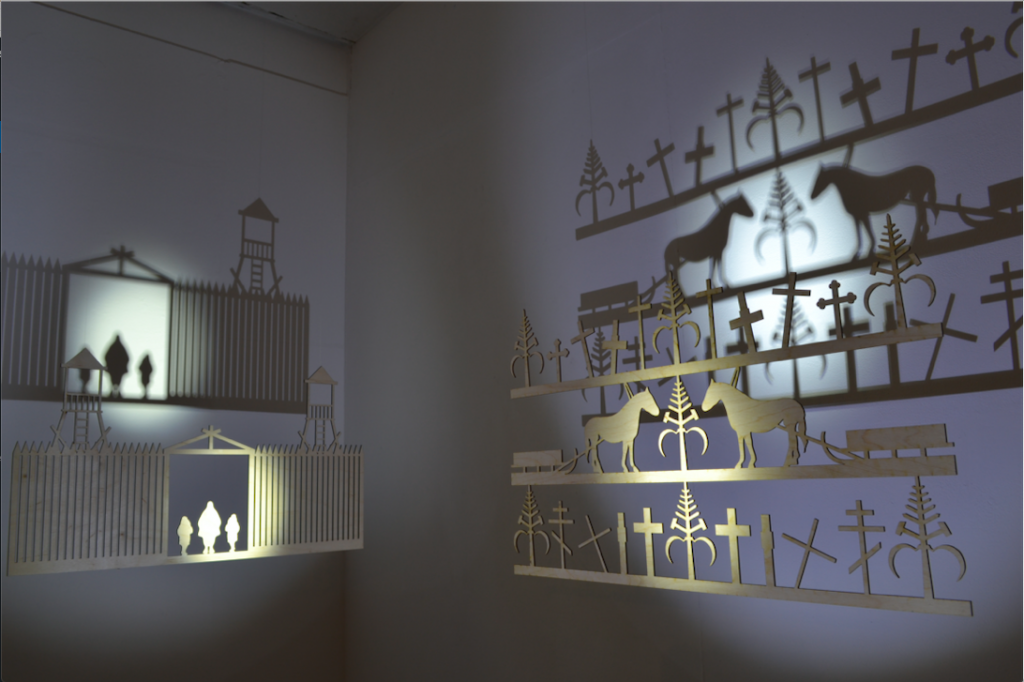 These panels are laser cut from Russian birch plywood and lit to cast shadows on the walls behind. At first glance, the delicate filigree of the woodwork and the images of horses and trees conjure a benign rural picture; but the panel on the right shows a cemetery at the camp, commemorating the fact that many of the refugees died as a result of the harsh conditions in which they were forced to live and work, in temperatures as low as -40°C. In the panel on the left, the three figures silhouetted in the camp entrance are loomed over by watchtowers that grow larger in the shadows. The horrors of war are sketched with great subtlety here, with ordinary people and seemingly mundane, unthreatening things taking centre stage.

Those with a keen eye might have noticed something about the trees in the cemetery panel. They are what Diana refers to as ‘gulag trees’ and appear in many of her pieces: 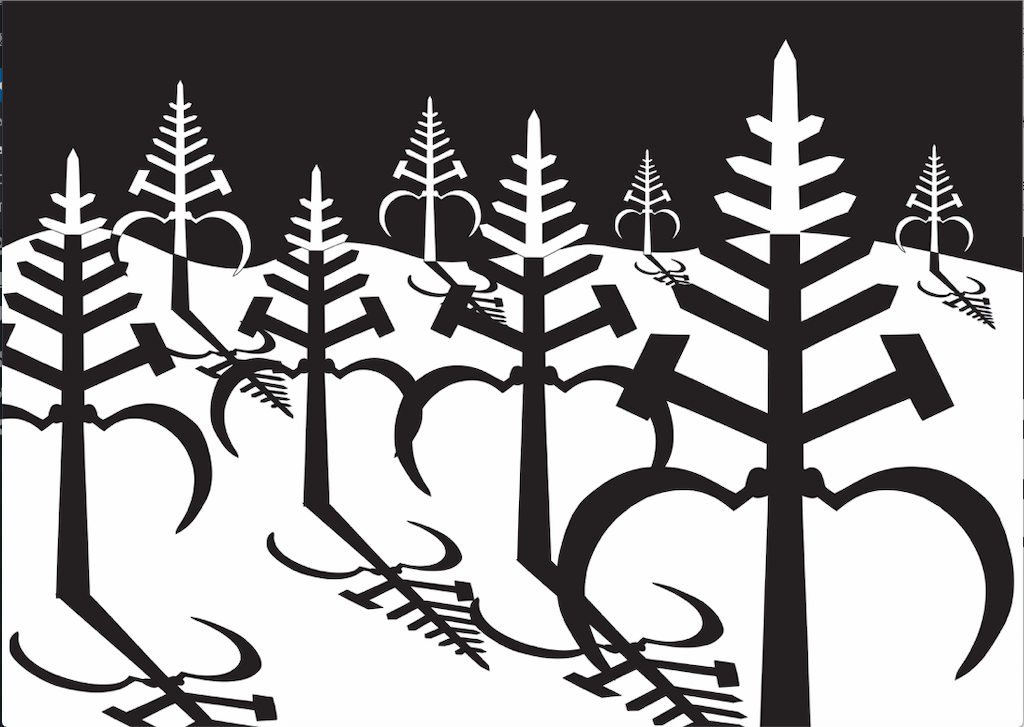 The deportees in Kopytovo Labour Camp had to cut down trees in the forests that surrounded the camp – work that sometimes killed them. As with Cabbage Patch, the simplicity of this piece is part of its impact. Made up from the hammer and sickle of Soviet Russia, with bayonet blades for the upper branches and ‘pincers’ that grow threateningly as they darken towards the foreground, these skeletal trees fuse images of nature and violent oppression. Lurking in an almost Christmas-card-style forest scene is a little-known war story. These trees bring back to life forgotten victims of WW2.

Working with trees again, Diana has found another way to mark the passing of time as experienced by Polish refugees during WW2: 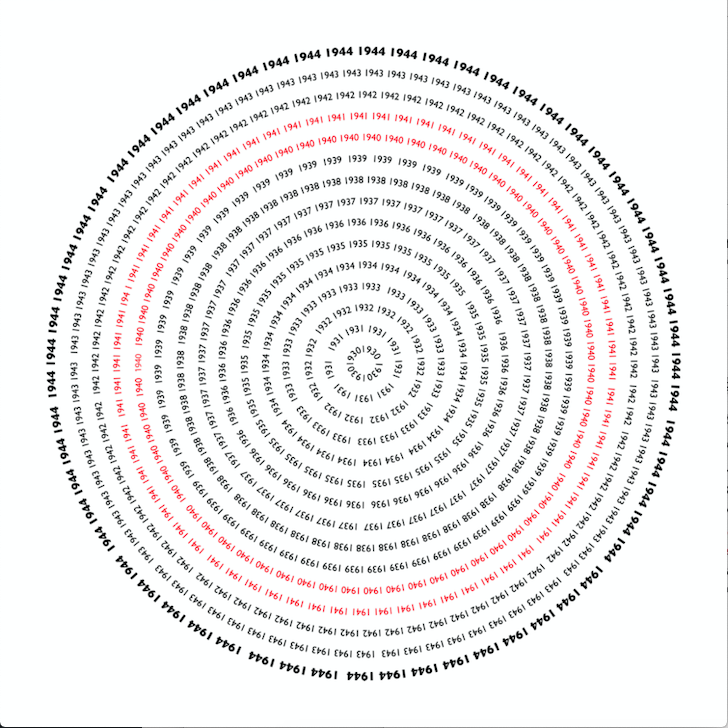 Many trees survived the war. Tree rings continued to form as the trees grew in the forest, and in those trees that were not cut down there were two rings for the two years the deportees laboured beneath them. Once again, this artwork uses an abstraction of nature to create a simple, accessible image which tells a complex history – of times endured and lives lost in the shadow of war.

Gulag trees crop up again in this next piece, an ironic take on the style of the revolutionary posters which extolled the virtues of Communist Russia – but showing the dark side of the regime with its deportations and labour camps. The Russian slogan ‘Here you shall live!’ warps the promises made by propagandistic posters into a threat, capturing the truth that deportees had no choice but to come; they walked through the gates of the camps with a bayonet in their backs. 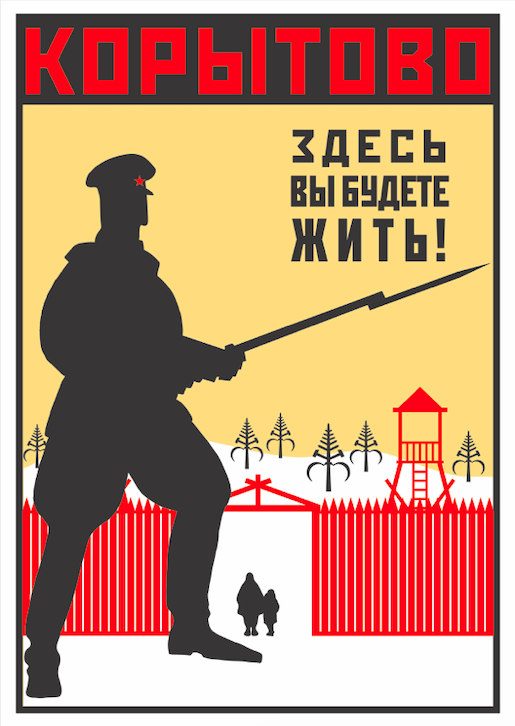 Diana has also used the poster format to reflect on a very different kind of camp which Polish detainees ended up being settled in when they were freed from the Soviet labour camps and forced to undertake another kind of migration to find safety and start a new life elsewhere. These camps were constructed by the authorities in the British colonies in East and Central Africa and consisted of rows of traditional thatched huts called rondavels. The refugees gave the roads between the huts Polish street names, for example Ulica Antokolska (Antololska Street): 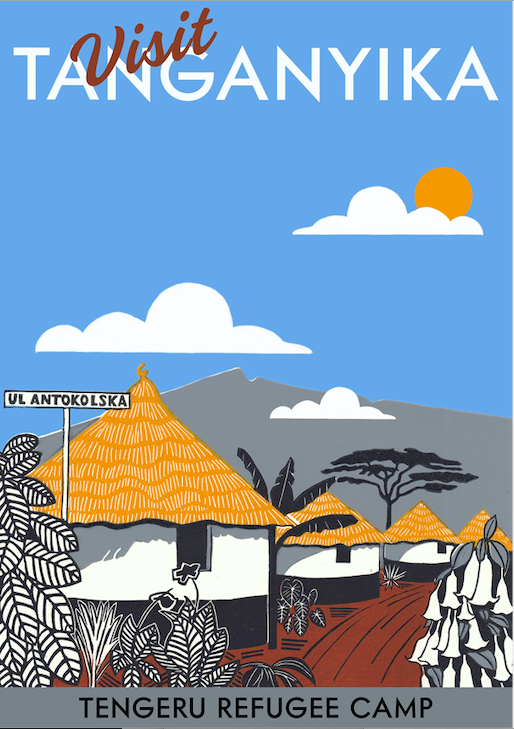 Diana’s pastiche of a tourist poster prompts the viewer not only to contrast the different kinds of camps but to think about different reasons for travel and to reflect on the experiences of forced migration, both past and present. As with her other pieces, the charm and attractiveness of Diana’s artwork draws us into story that has many layers. This poster does not look at first glance like conflict art; but it arguably paints a much more telling picture of war and its effects than any representation of pitched battle or photograph of a bombed-out city.

We learnt so much from Diana in our podcast conversation – about traditional habits of visualising war as well as the more expansive approach that she is taking through her art. Do listen when the episode is released! You can learn more about her art by visiting her website, www.dianaforster.com; and if you live in the Oxford area, you will be able to view her art in person (pandemic restrictions permitting) when her latest exhibition opens in September 2021 at The North Wall Arts Centre.