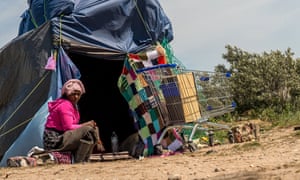 The BBC has just reported that David Cameron has been criticized by the Refugee Council for using “irresponsible” and “dehumanizing” language. Speaking on the Calais crisis in an ITV interview, he spoke of “a swarm of people coming across the Mediterranean, seeking a better life, wanting to come to Britain”. The Refugee Council added: ‘”This sort of rhetoric is extremely inflammatory and comes at a time when the Government should be focused on working with its European counterparts to respond calmly and compassionately to this dreadful humanitarian crisis.” The Leader of the Labour Party (Harriet Harman) echoed this: “He should remember he’s talking about people and not insects.”

I’m with the Refugee Council and Harriet on this one. But ‘dehumanizing’ rhetoric is one of the oldest political-oratorical tricks in the book. Aristophanes makes fun of it in his play Lysistrata when he has a chorus of Old Men re-direct (I think it’s implied) anti-Persian rhetoric from the days of Salamis and Plataea towards the small chorus of old women who have come to defend the female occupation of the Acropolis: ‘Well here’s a surprise! A swarm of women reinforcements outside the walls as well!’ The women reply: ‘What are you frightened for? Are there that many of us?’ and they then point out that there are, of course, thousands of other women elsewhere in Greece. The Greek word for ‘swarm’ here is esmos. It is usually used of bees, wasps, and birds but its literal application sometimes extends to ‘things’ as well as animals: ‘streams’ or ‘piles’ of milk, honey or even diseases.

In Aeschylus’ Suppliant Women, the 50 daughters of Danaus (who are asylum-seekers and refugees themselves, in a way) describe the 50 Egyptian cousins who are pursuing them for an enforced marriage as a ‘man-filled hubristic swarm (esmos)’. Later on, their father reverses this rhetoric to describe his daughters as an ‘esmos (flock) of doves preyed upon by hawks in dread of hawks of the same feathered tribe— kindred, yet foes, who would defile their race.’ Of course, there’s a more benign or innocent side to an esmos which is ripe for rhetorical and literary exploittation – birds who do no harm or, as Aristophanes’ feathered chorus points out, can be positive boon for pest control, and bees with their pollination and honey. We’d be done for without our birds and bees.

But democratic political rhetoric likes to harness the negative, threatening image of the animal world: wild, bestial, uncivilized, without speech or reason. Demosthenes, Dinarchus and Aeschines were early adopters of this approach. In their politically-motivated trial speeches against each other they call each other ‘ape’ , ‘fox’ or just ‘this beast here’.

Like the comic poets, the orators sometimes also ‘de-humanize’ the objects of their attacks with the word katharma. A katharma was the off-scouring of purification rituals: it absorbed pollution and was discarded or buried. Calling someone a katharma was perhaps like saying ‘scum’ or ‘piece of rubbish’, although with an added implication of being religiously impure and tainted.

When the orators used this language against their opponents, the opponent usually had the chance to give as good as they had got in their own speeches, even if they sometimes had to wait for a later political-legal tussle to do so. In our modern culture, de-humanizing rhetoric usually enters the public realm when the people it is applied to have no equivalent access to that realm or indeed, any right of reply at all.

Paul Adams’ video at the end of the BBC page  here is one of several recent BBC films where the people in the camp at Calais get to talk about their situation and experiences in their own words.  A longer more in-depth film for BBC’s Newsnight interviews several camp members and is available here for 28 days.