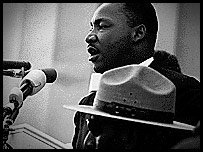 Today is the 50th anniversary of Dr Martin Luther King’s famous and brilliant  ‘I have a dream’ speech.  Dr King delivered this address at the Lincoln Memorial as part of the ‘March on Washington’.  The speech has been endlessly analyzed and discussed and it is rightly regarded as one the best examples of public oratory of the 20th century – it could well be the best example.  Although I wasn’t born until the year of King’s assassination, I have a vivid memory of hearing this speech for the first time when I was about eleven years old: a teacher played it to us at a school assembly on a battered reel-to-reel tape machine and I was blown away by it.

As Sam Leith reminds us in his recent book on oratory, Dr King’s speech is best understood as a ‘sermon’ in the tradition of black Southern Baptist preaching .  I hadn’t really appreciated until today the extent to which the speech is filled with allusions to, or citations of, other texts, songs and speeches. We get the Bible and other scripture of course, but we also get, inter alia,  the American constitution,  a traditional ‘Spiritual’, Lincoln’s Gettysburg address, the US National Anthem and Shakespeare’s Richard III.  King also re-uses phrases and ideas which he and other activists had been honing in their orations and church sermons for over a decade. I also hadn’t realized that King had pre-prepared the speech but started to depart from his text and improvise.  The ‘I have a dream’ section is the most improvised bit.

Leith mentions an academic journal article on ‘I have a dream’ by Alexandra Alvarez (Journal of Black Studies, Vol. 18, No. 3 (Mar., 1988), pp. 337-357).  I’ve just read this article with great interest and admiration.  What Alvarez does is show how the speech can only be fully understood as a ‘speech event’ in which King is engaged in an antiphonal dialogue – ‘call and response’ – with his audience. This format is typical of oral-traditional black Baptist sermonizing.  By transposing that dialogue form to a context of mass political protest in the heart of Washington, King and the crowd become ‘senders’ of the speech’s demand for equal rights.  The primary ‘addressee’ of this joint call is the US Congress.  Alvarez shows that King’s several repeated phrases (e,g.’Now is the time’  and ‘I have a dream’)  are actually formulae which both encourage the audience to vocalize their affirmation and  encapsulate the speech’s essential message when strung together.  Given that repetition of words or phrases are a well-known Greek and Roman rhetorical device and category of analysis (‘anaphora’) , one is tempted to see whether this dual function  can be ascribed to ancient examples as well.

Alvarez rejects any transcription or analysis of the speech in terms of sentences and paragraphs as a distortion of its performative, dialogic and poetic dynamics.  Here are a couple of excerpts of her transcription.  You need to know that the numbered ‘lines’ correspond to units of utterance which are followed by pauses and whose ends are marked by rises or drops in intonation.   Alvarez believes that falls in intonation are a particular signal to the crowd to respond if they wish.  The words in brackets are the responses of members of the crowd which are audible on tape (you’ll see that some follow a rise in intonation).  ‘A’  denotes a response in the form of applause; ** = falling intonation; *** = rising intonation.

(3) as the greatest demonstration, for freedom, in the history of our nation** (Yes) A

(5) a great American in whose symbolic shadow we stand today**

(9) who had been seared in the flames of withering injustice **

(136) will one day live in a Nation where they will not be judged by the color of their skin, but by the content of their character.** (My Lord)

(138) I have a dream that one day down in Alabama with its vicious racists*** (Yeah, Yeah)

(139) with its governor, having his lips dripping with the words of interposition and nullification** (Yes, Yeah)

I have come across even more complex systems of notation on the part of sociolinguists and anthropologists in their attempt to reproduce and analyze various forms of oratory and verbal art in many different cultures (and the interaction of their audiences) which have been captured on tape. These serve to remind us that a transcript which merely records the words which have been uttered may well fail to convey the essential dynamics of the live occasion.  And it is rather sobering to turn to written speeches by Demosthenes or Cicero and realize that we can only guess at the nature of their live delivery and reception.  Not that we don’t get lots of clues about ideal and problematic forms of delivery in treatises and handbooks.  And  Greek and Roman orators have always been analyzed in terms of the ‘rhythm’ of their prose.  Beneath the most obvious grammatical structures (sentences, subordinate clauses etc.)  a Classicist with the right skills can point to likely pauses and cadences.   But without a time machine we are never going to be able to access an ancient speech in the way that Alvarez can for MLK’s masterpiece.