How has the average length of a scientific article changed over time? The answer depends on the purpose of the ‘article’ (a letter, a preliminary announcement, a fully-detailed research monograph); the space available in the printed journals; and the contemporary fashion for scholarly writing. But here, nonetheless, are some insights from the history of Royal Society publishing. [NB see caveats below] 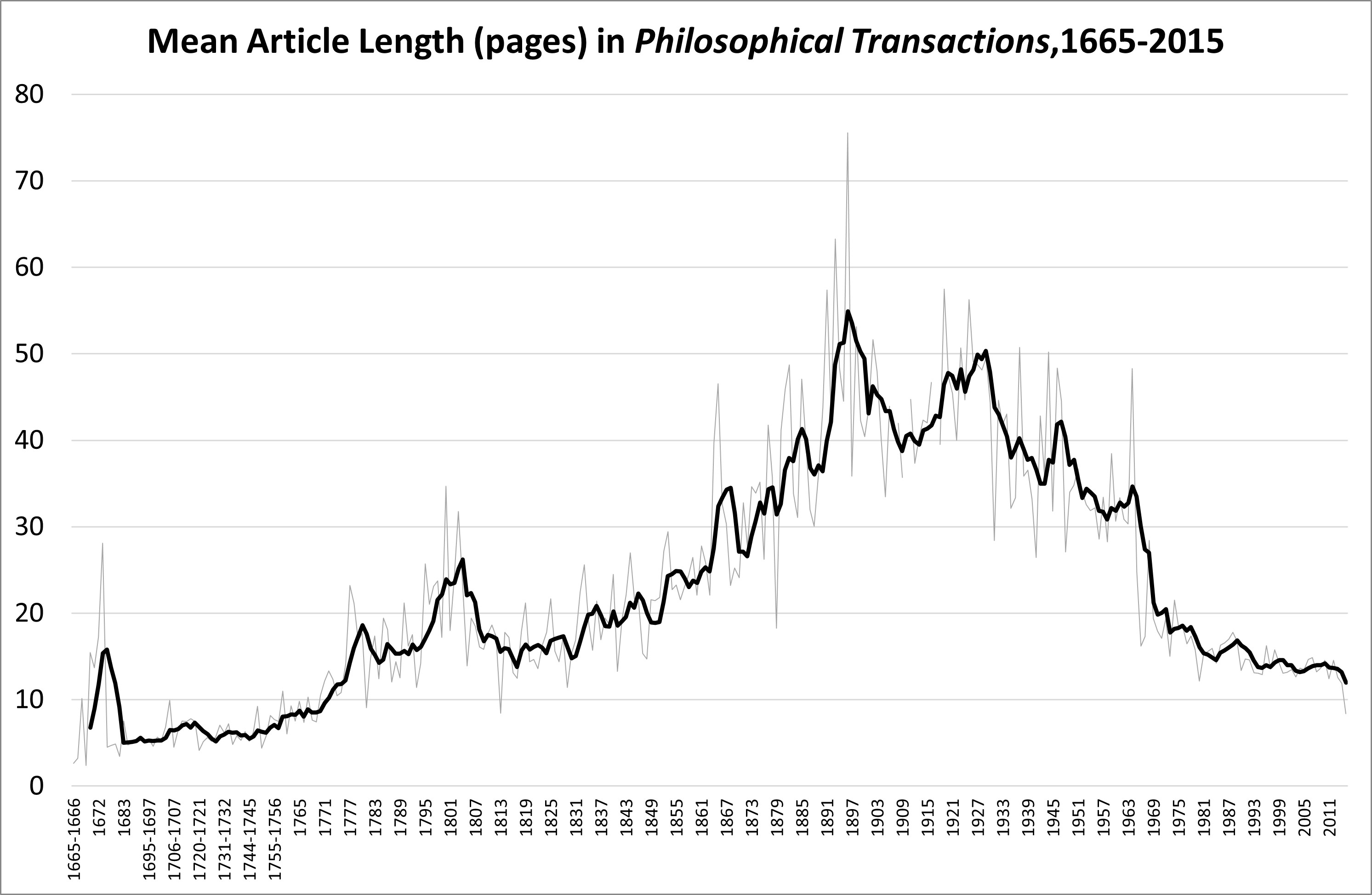 As the Society’s oldest, longest-running journal, the Transactions gives us the longest view: the length of published items was growing through the 18th and 19th centuries (which helps to explain why publishing costs were so expensive by 1890); falling in the early 20th century (perhaps under pressure from treasurers, but note that there was also a more general shift to using shorter article lengths in more-rapid publication venues – including the Proceedings); and falling most notably around 1970. That final drop looks like a change in formal page limits, though we’ve found no direct evidence. Historically, the Transactions didn’t have page limits (unlike the Proceedings), other than a (very notional) 40 pages. 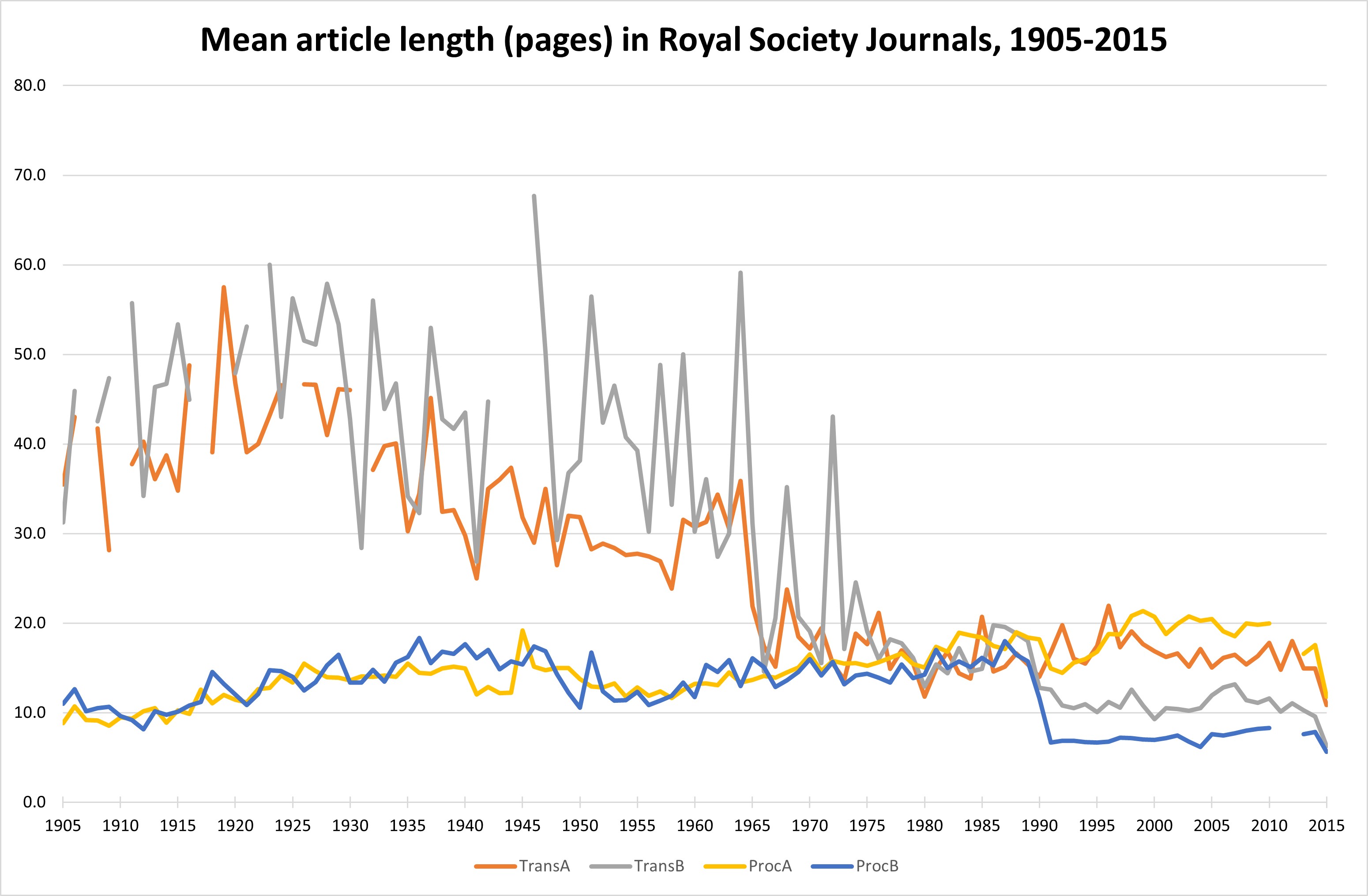 After 1905, the Proceedings specialised in shorter articles (published approximately monthly), while the Transactions remained a venue that would take much longer articles. The majority of Royal Society articles were published in the Proceedings throughout this period. There was a notional limit of 12 pages on Proceedings articles early in the century, later rising to 24 pages. When the journals were relaunched in 1990, Proceedings B introduced a strict page limit – as is very clear in the figure!

The data above are taken from a spreadsheet that is maintained by the Society’s publishing staff. That spreadsheet includes the number of pages per issue, and number of articles per issue, of all RS journals from 1665 to present (but without distinguishing between text or images). With help from the St Andrews research computing team, that data has been turned into counts per year (rather than per issue or per volume) totals, for ease of comparison.

The page counts make no allowance for the occasional change of paper size, margins or text size, nor for the quantity of illustrations.

Average article length was obtained by dividing the number of pages by the number of articles per year. For the reasons stated above, it is a rough approximation, rather than an exact measure, but it does a useful job of giving us a sense of the trends over time. 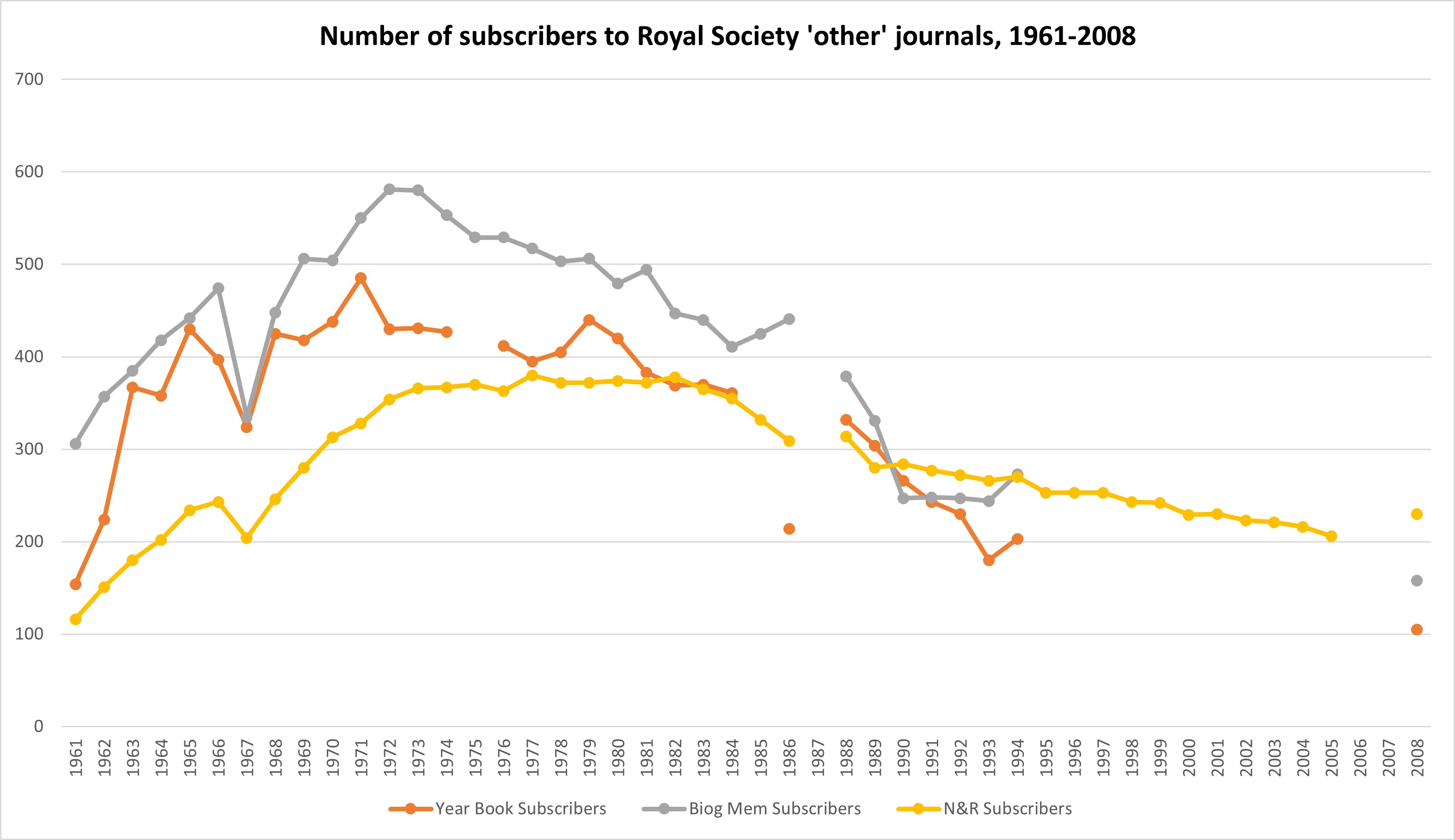 The time taken from receipt of a submission to publication is today frequently used as a ‘key performance indicator’ by academic journals. It is a (partial) measure of the speed or efficiency of the journal’s editorial and production processes (though also highly dependent on the author’s approach to revisions and proofs). The Royal Society has been recording and reporting this metric since the early 1950s, which allows us to produce the graph below:

For the period 1949 to 1986, we have data separately for the Society’s four journals. Articles in the two series of theTransactions typically took longer than those in the Proceedings, presumably because articles for the Transactions were longer than those for the Proceedings, and usually went through a stricter refereeing process (potentially involving more referees, and more author revisions).

Although the Royal Society’s staff claimed to care about speed of publication, the strong impression from the archive is that they were relatively powerless to do anything about it in the pre-1990 period. Referees were often blamed for being slow. Authors were sometimes blamed for being slow to make revisions. The printers and publishers (Cambridge University Press) were often blamed; in return, the Press pointed out that, if the Society would only commit to a regular publication day (on the same day each month), then the Press could plan the Society’s work into the printing schedule, rather than having to fit it in around other scheduled work. The move to a regular schedule for the Proceedings journals in 1982 did help in the short-term.

The improvement in editorial and production times since 2000 reflects the dramatic change in workflows in academic publishing. These include the use of author-generated electronic text (since the mid-1990s), which could feed into computerised typesetting processes (which had existed since the late 1970s, but had initially required re-keying); the introduction of editorial management software, and a close attention to staff efficiency (a new KPI); and digital printing technologies and online publishing.

From 1951 to 1979, the average ‘time taken from receipt to publication’  for the previous two years was printed in the Society’s Year Books (and in the 1960s, the quickest and slowest times were also recorded, as well as the average times for various parts of the process). From 1979-81, these data appeared instead in the Annual Report. The data continued to be gathered until 1986, but were no longer made public.

The more modern data series begins in 1997. It comes from a spreadsheet maintained by Stuart Taylor, Director of Publishing. This data differs from the historic series because it relates only to the journals that are now defined as ‘research journals’ (and therefore, it excludes Transactions A and Transactions B). The modern data should be treated as a continuation of the data for Proceedings A and Proceedings B, but it does also include the new journals founded after 2003. 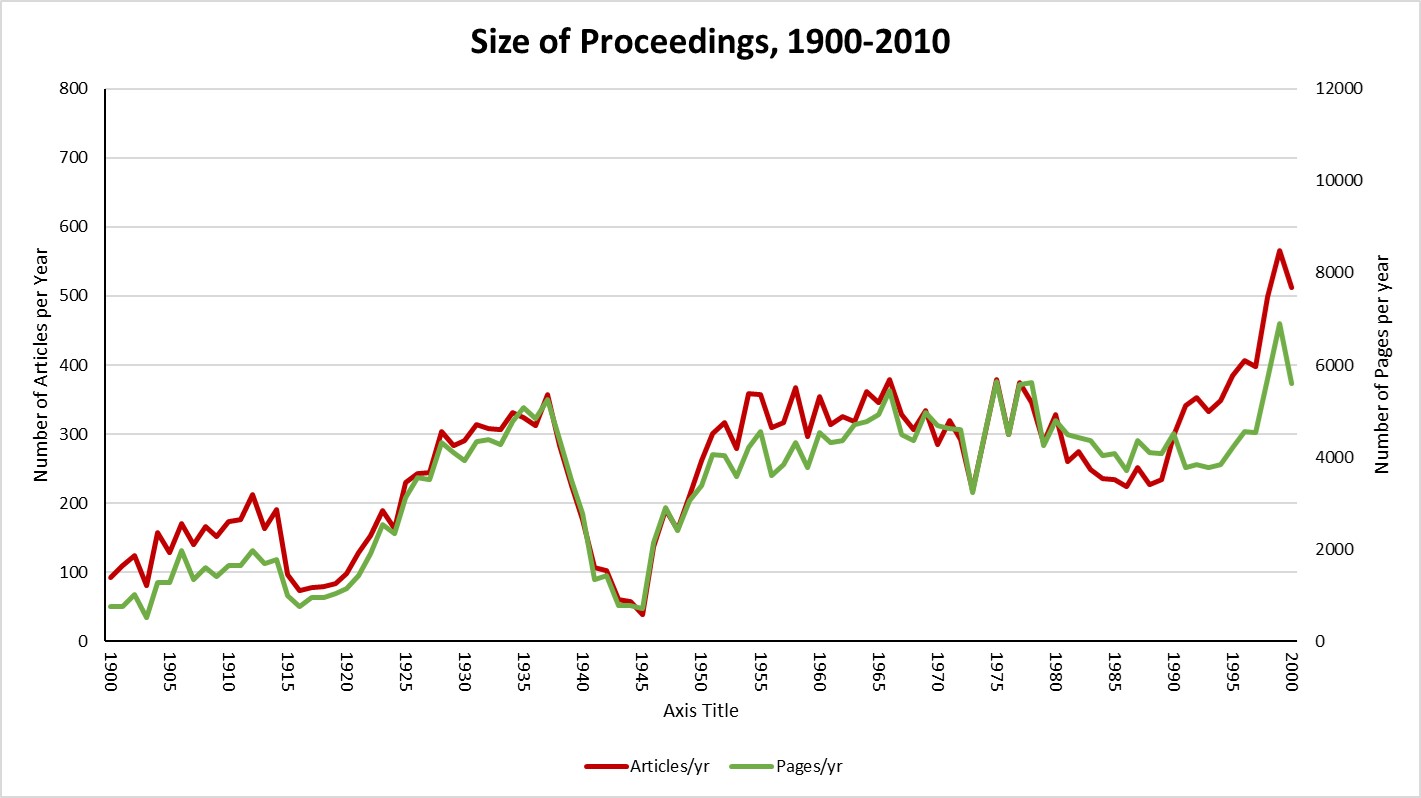 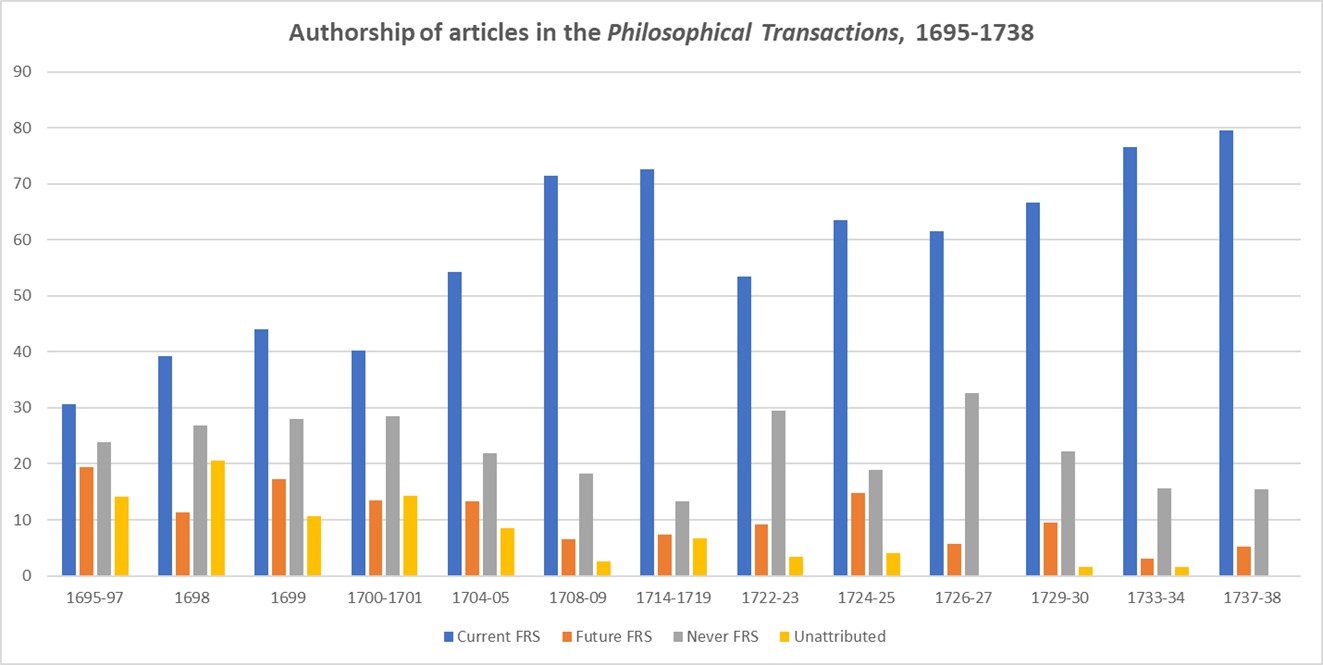 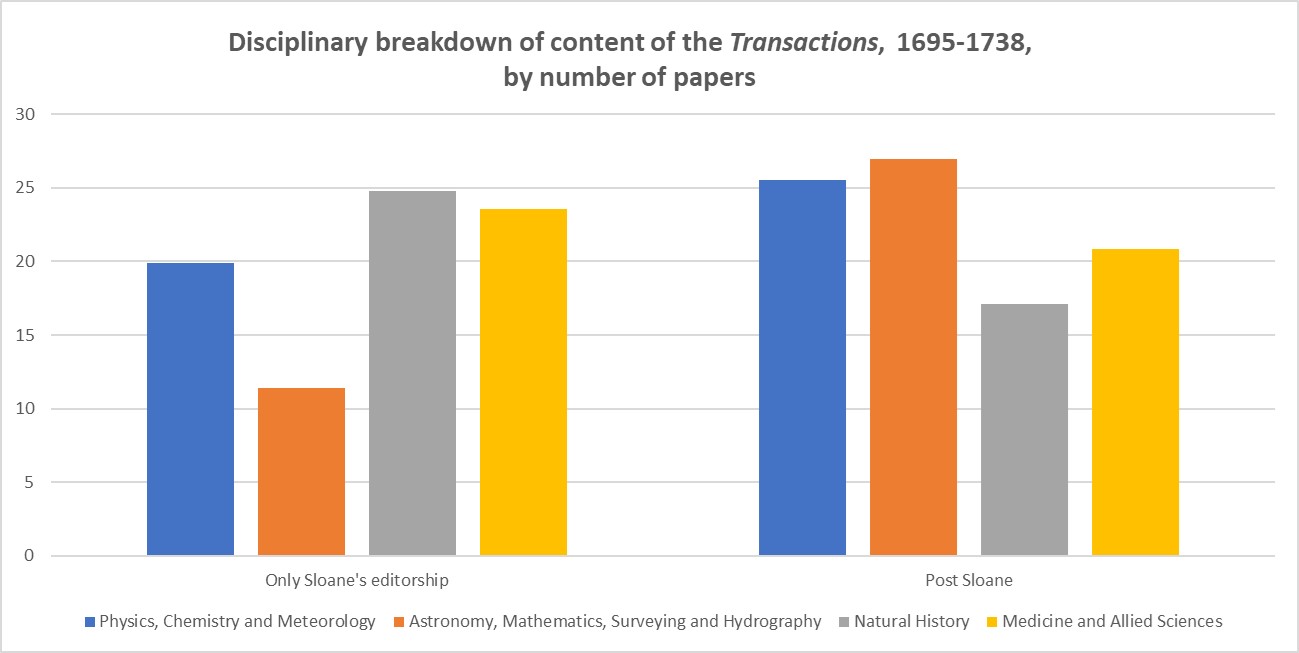 This graph offers additional detail on the overall rejection rates at the Royal Society’s Transactions and Proceedings in the second half of the twentieth century. As I discussed in that earlier post, the Royal Society historically had a low rejection rate (around 10-15%), due to the filtering-out of papers that was done pre-submission, since papers had to be submitted via a fellow. END_OF_DOCUMENT_TOKEN_TO_BE_REPLACED

I looked at the numbers of submissions to the Royal Society journals in an earlier post. Here, we look at the relationship between the number of submissions, the rejection rate and the sustainability of peer review. END_OF_DOCUMENT_TOKEN_TO_BE_REPLACED

This graph shows as much information as we have about the Royal Society’s expenditure on publications, and income from sales of publications, from 1752 (when the Society took on the ownership of the Transactions) until 1920.