Like most humanities PhD students, we had no idea what a game jam entailed. A quick google search informed us that in this nerdy intensive boot camp, the military regime was replaced by long hours facing the computer and writing board with the aim to create a videogame from scratch. A few days before the conference, we were a bit unsure of whether we could contribute to game developing in any way because we had no gaming experience, unless you count juggling numerous Firefox explorer tabs. But we were reassured that the only skills we needed to bring to the table were our knowledge of literature, a love for writing and an enthusiastic attitude which we had plenty of. As the conference organisers noted in their brochure, we wanted to ‘learn something new; do something different; challenge the stereotypes’.

So here we were, it was 9 o’clock on the 20th of June when the two day conference ‘Video Games and Literature: Beyond Stereotypes’ was inaugurated by Rhianna Pratchett in conversation with Don Paterson. The fact that a famous videogame writer shared her professional experience gave us an insight on what we would humbly be facing later that morning. At the end of the session, the two speakers unveiled the game jam theme – ‘A place long forgotten’ – which reflected the overarching topic of the conference: the common ground where videogames and literature meet.

After the opening talk, game jam participants were gathered by Dr Dayna Galloway (Abertay University) to be divided into groups. This was a crucial moment since it would determine our fate and, mainly, the people we would spend most of our waking hours with over the next two days. As we looked around the room, embarrassed and confused, these two PhD students were promptly adopted as writers by a congenial looking team of five Abertay undergraduate students. They went by the name of Cation Games: Charalampos (also referred to as Babis), Tom, Thomas, Cari and Jordan’s working group seemed like a well-oiled machine in which all of them had a specific role, including but not limited to being videogame artists, designers, producers and programmers. In addition to Cation Games’s already established group dynamic, as PhD students in literature and cultural studies, we were to contribute to the game jam as writers, an appointment that we were slowly warming up to after Rhianna Pratchett’s previously mentioned talk.

When we got hold of a seminar room in the Arts Building, the Cation Games gang set up their computers while we timidly took out our pens and papers, initially perpetrating the stereotypical divide between the humanities and computer sciences. Not acquainted with each other yet, Cari suggested to introduce ourselves and, to break the ice, to mention one weird (potentially funny) thing about ourselves. So after anecdotes about bungee jumping off cliffs, liking the smell of bleach, Adam Sandler’s films and playing underwater hockey, it was suffice to say that the ice was well smashed. This informality set the tone for the rest of the game jam: a relaxed environment with loads of sugars and caffeine to fuel our creativity.

The first step in every game jam is to respond to the theme and to brainstorm on game concepts. This is the most creative and, must we say, crazy part of the game jam. As game jam newbies, we found this phase very exciting and, fortunately for us, our ideas were taken seriously. This was the moment when our stereotypes about game developing were challenged the most; even though we were not gamers ourselves, it was heartening to see that we could contribute in a significant way to the conception of the game.

As two PhD students who work largely on theoretical concepts of cultural memory and mass scale traumas, the theme ‘A place long forgotten’ not only related to our academic research but also presented fertile ground for creative engagement. The brainstorming resulted in a video game concept called Alternate Existence set in a dystopian future where characters would play a simple memory game at a kiosk in order to collect the currency ‘neurons’. Once they had collected enough ‘neurons’ they could buy readymade memories such as a camping trip that could be glammed up by paying for more accessories like a bonfire and tent. For the sake of convenience, we decided to focus on three memories that the player could buy: a birthday party, a lakeside trip, and a rooftop lounge to celebrate life milestones such as a graduation.

Once we had decided the structure of the game, each group member undertook specific tasks. The programmers, Babis and Thomas, explained to us the technicalities of coding the game for which they used a specific software called Unity. The 2D and 3D artists, Cari and Jordan, asked us to provide them with a list of objects and furniture to fill up the memory spaces which they would consequently create and design. Tom, the producer, had the task of creating small animations and overseeing the overall creation of the game. One might wonder, as we did, what was left for us, the writers, to do after the brainstorming and conception phase? Obviously, we thought our role had finished there. But we were mistaken. The gamers explained that the game would not function as a fully-fledged narrative without the writers. Then our job consisted of not only writing-up an introduction for the game itself and its rationale but also devising stories of characters within the fictional world of Alternate Existence. 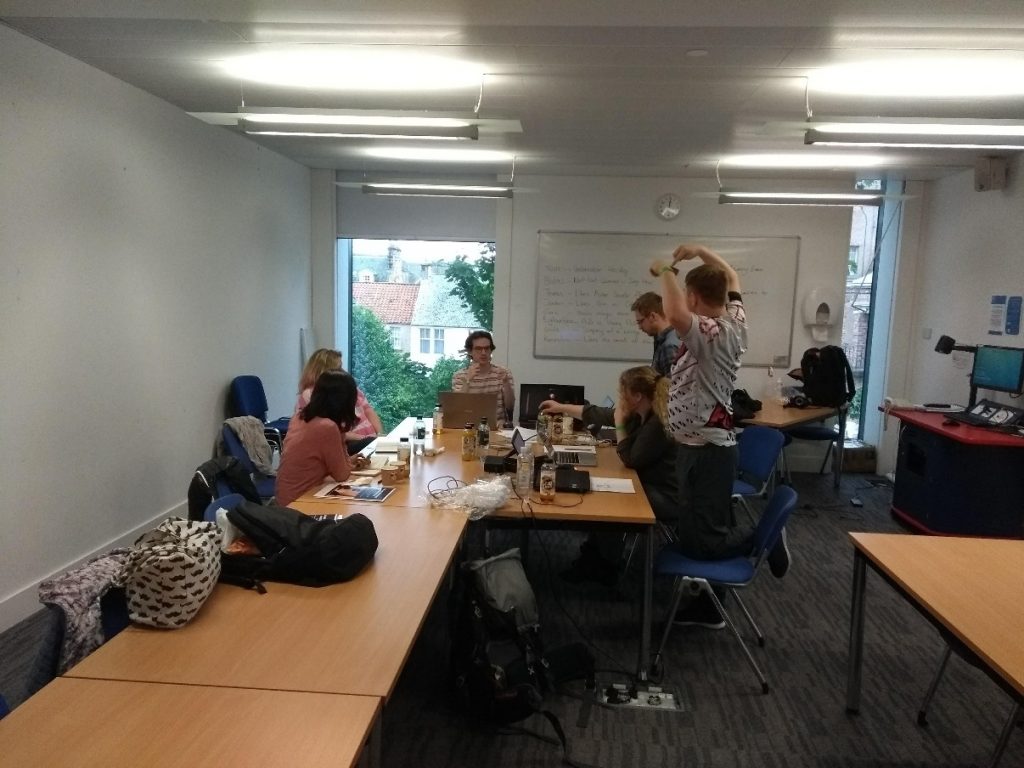 Figure 1 The ‘jamming’ group at work

As the whole group worked hard on creating and writing up the game, the first day went by quickly. On the second day, we focused on polishing the game and our pieces of writing. Although it might seem that the writers and gamers were working separately, that was not the case. As shown in the picture above, the writers were sitting opposite the gamers. This layout was carefully conceived so we could present each other with finished parts of work and get feedback on it. Furthermore, it meant that both sides engaged in an ongoing dialogue between the humanities and the computer scientists.

The aim of the game jam was to produce something concrete and functional to present to the conference participants on the evening of the last day. This goal made us work against the clock and pushed us to have both the game and an effective presentation ready. As for the effectiveness of the presentation, the Cation Games group urged us writers to have a logo and a brand identity. Due to the building where the School of Modern Languages and our offices are based at, we modestly chose to name ourselves Buchanan’s Brains. 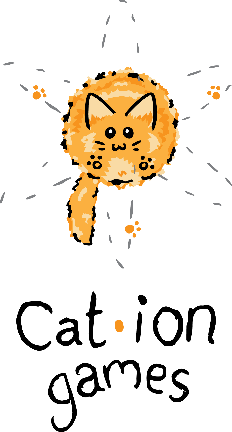 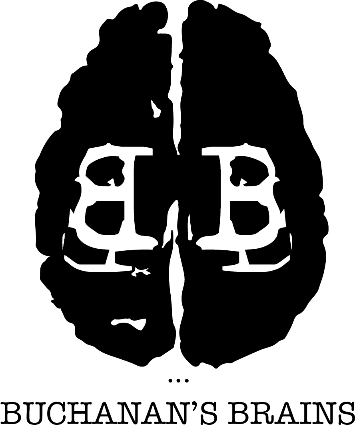 This made us reflect upon the value that the two parts of the group attributed to the game jam. For us, this represented a great opportunity to get an insight into the gaming industry and to write free from academic conventions. Whereas for the Cation Games members, the game jam was considered a means of showcasing their programming and designing skills as individuals as well as an already established team.

We were to present our game idea and showcase a preliminary version of it during the last session of the conference on the 21st of June at 5.30pm. Cation Games’s producer Tom kindly volunteered to deliver the presentation and Babis, one of the programmers, walked the audience through the game. We were not sure how it would be received but, after the presentation, we were reassured that our game concept and development was interesting and attractive.

It was also a pleasure to sit through the other five groups’ presentations which were vastly different from each other, attesting to the rich potential of the common theme ‘A place long forgotten’. Notably, others writers did not play with creative writing like we did but many also engaged in an intermedial dialogue between a variety of media like literature and music with video games such as ‘1976 on Record’ and ‘The Real Guide to Saint Andrews’. Moreover, although the games were not expected to be completed, the presentations gave us a gist of what it entailed. This demonstrated that the game jam is not a space to ‘finish’ developing ideas, but an opportunity to brainstorm, generate concepts and practise putting them into action.

Participating in the game jam as complete novices to gaming taught us many important lessons. We recognised the significance of working in a group and getting positive results in comparison to the lonely academic life of a humanities PhD student. It also made us realise the potential for producing academic work in collaboration with other academics, PhD students etc. At the same time, we are aware that working in a team has its own cons. As a matter of fact, there might be a lot of ego clashes, which we luckily did not experience, and it takes a lot of compromise to reach common ground. On the whole, the game jam highlighted how important it is to foster collegiality in academia and how it can lead to effective results.

As we were writing this piece, we asked ourselves, would we participate in a game jam again? If given the opportunity, yes. We would also recommend it to fellow PhD students, not only because it gave us an insight into a field we knew nothing about but it also made us grasp the ‘human’ aspect of the humanities (and sciences). 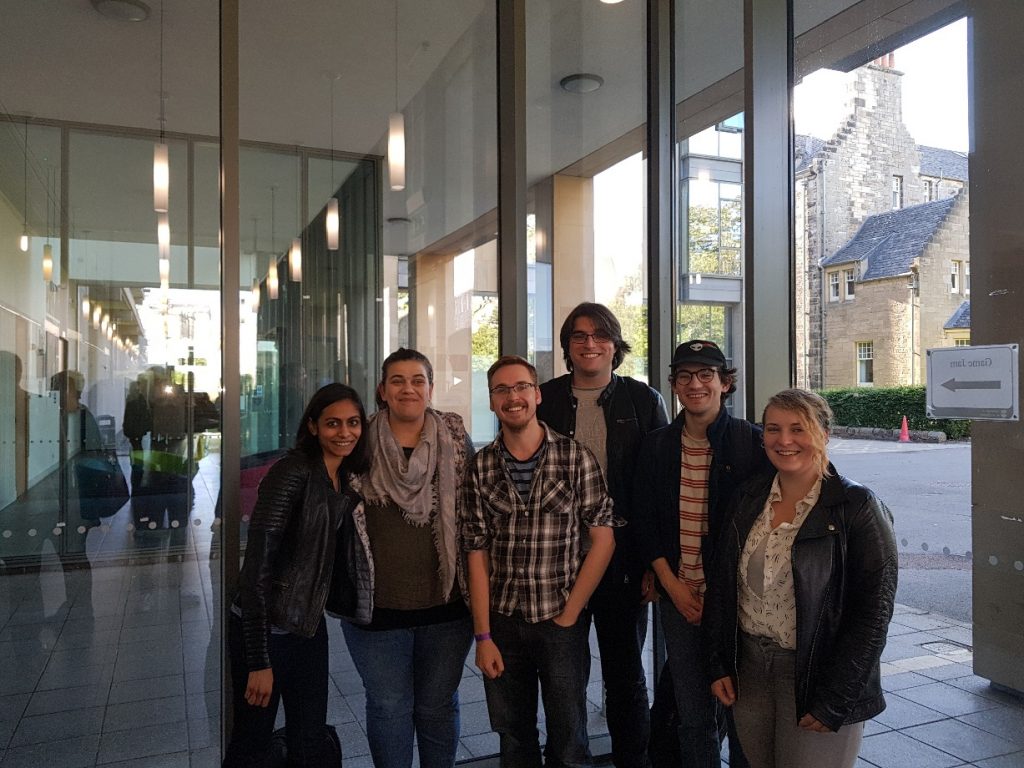 Figure 4 Cation Games and Buchanan’s Brains after the presentation on the 21st of June 2018.

Introduction to the Game 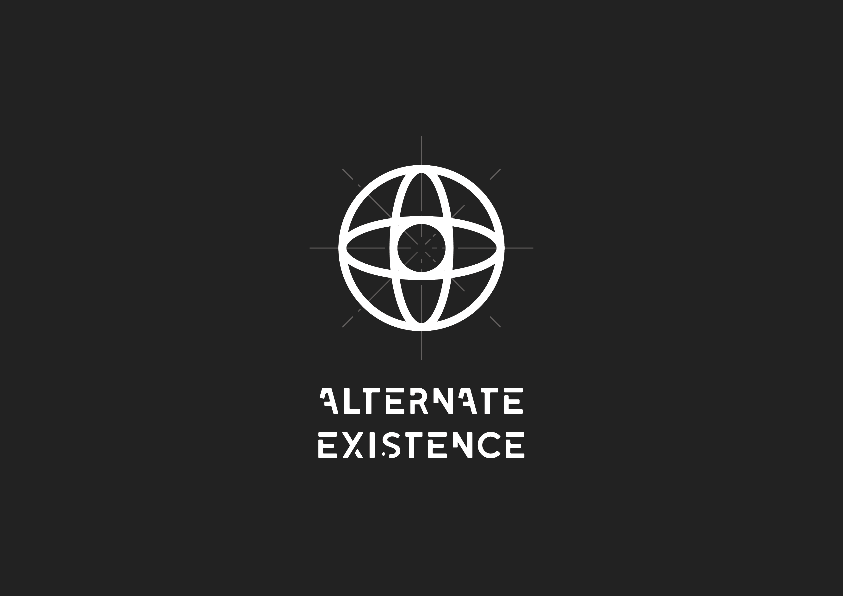 Set in a dystopian future, Alternate Existence™ provides happy memories to brighten up dreary working lives. As the player approaches the Memory Kiosk, s/he collects neurons, the memory currency, by playing a simple memory game. After building up a significant neuron collection, the player can purchase ready-made stock memories. Memories can be customised to varying levels of pampering and glamour depending on the neuron capital.

So, go crazy! Make your memories great again, but remember everything comes with a price…

Excerpt of a Short story 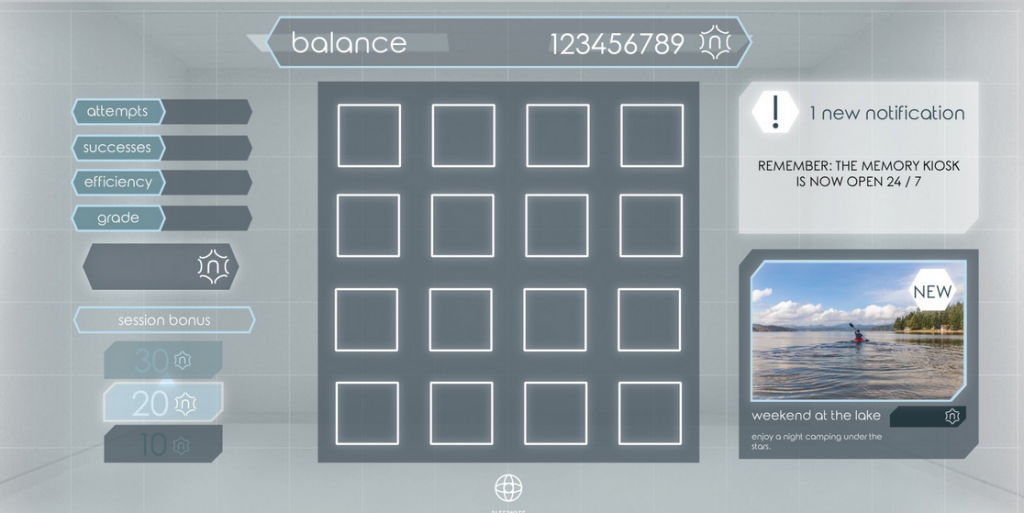 Set in 2084. Huxley lives in the dystopian city of Mnemonia, and works sixteen hours a day in a factory assembling cell phones: a clog in the machine, alienated from the rest of the population.

On the weekend – that is to say, on Sundays, as Saturdays were no longer a holiday – Huxley would visit the Memory Kiosk. That was not an easy task: he would have to queue for up to two hours to access just one memory, and not even a very good one, because Huxley was terrible at the Memory Game. But every week, he would treat himself to a Champagne Upgrade for his Birthday Party memory… that was his one big indulgence. 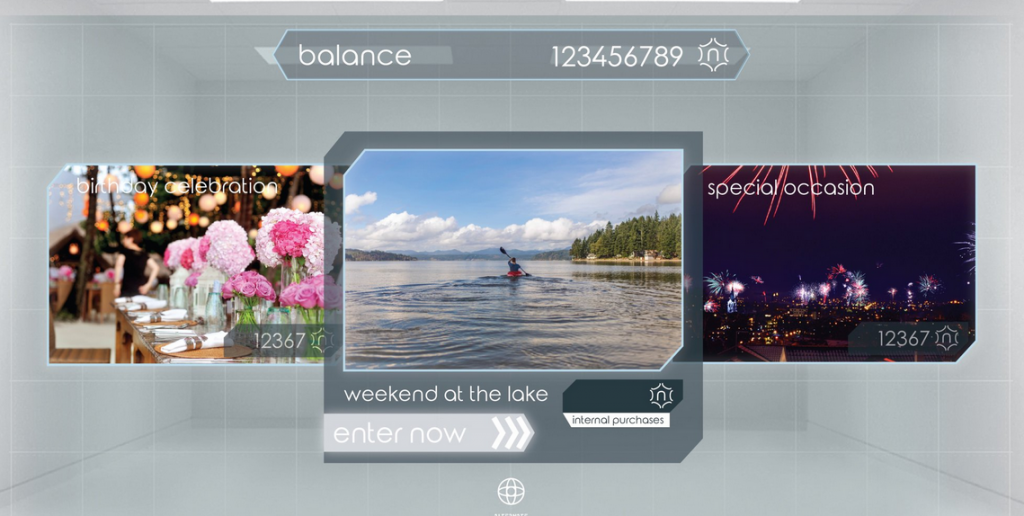 Today he was going to try something different. He had been collecting Neurons for seven years straight now and now he would finally be able to buy himself a trip to the Lake. Huxley entered the Weekend at the Lake memory capsule, and saw the sun rising timidly. He purchased a nice Canoe, and enjoyed the beauty of the new dawn, while rowing on the crystal clear waters of the lake. Saving all those Neurons took so long that he really wanted to make the most out of his memory experience. He wandered around the campsite, admiring the green trees, he hadn’t seen anything so green ever. He remembered his grandmother telling him stories of evergreen forests, cold breeze, and midges. Midges! He wondered what those felt like.

He built a Bonfire – it cost him dearly, but it was worth it. As the glowing embers crackled with life, they seared themselves into Huxley’s mind.

And… that was it. His time was up. He trudged back home, dreaming of that four-million-Neuron Lake Boat that he would never be able to buy….