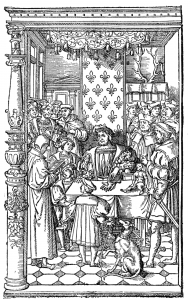 Antoine Macault reading his translation of Diodorus Siculus to King Francis I (c.1525)

This project aims to shed new light on the connections between the Greek literary and intellectual culture of the late Hellenistic and Augustan periods (second century BCE to first century CE) and the period often known as the ‘Second Sophistic’, i.e. the late first to early third centuries CE. The latter period has been a growth area in recent scholarship, but many late Hellenistic authors are still relatively neglected.

Funding for the project has been generously provided by the BA/Leverhulme Small Research Grants Scheme  and the School of Classics at the University of St Andrews.