‘From immigrants to citizens? Middle Eastern Christian identities in Europe’ 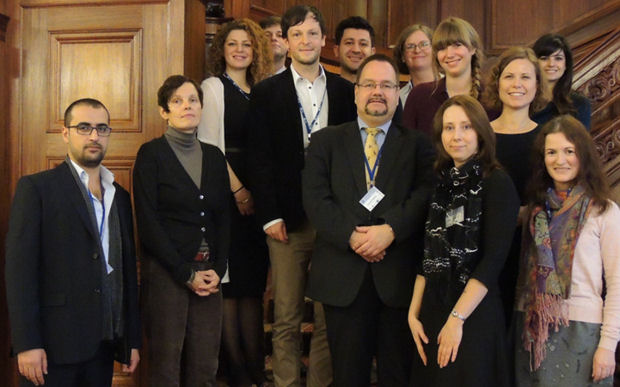 After a warm welcome by Prof. Tomasz Domański, Dean of the Faculty of International Relations and Political Science, University of Lodz, and Marta Woźniak, workshop organizer, Fiona McCallum gave an overview of workshop as well as DIMECCE project. 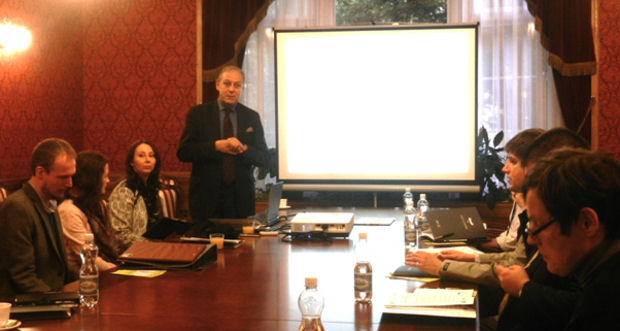 The first panel entitled Citizenship Discourses from the DIMECCE Project, was chaired by Lise Paulsen Galal and consisted of three presentations. Fiona McCallum and Alistair Hunter spoke about Middle Eastern Christian’s quest for equal citizenship in the UK. They sketched the policy landscape in the UK relating to citizenship and then introduced three analytical themes raised in their interviews with Middle Eastern Christians: 1) exclusion in the homeland and fulfillment in the UK, 2) lower expectations and difficulties in the UK, 3) protective patriotism and ‘dangerous Islam’.

The third DIMECCE paper was given by Marta Woźniak and Danielle Barsoum Malki who  presented a case study of the Sweden based NGO ‘Assyrians Without Borders’ (AWB) to demonstrate how diaspora organisations contribute to development. They introduced Mohan’s (2002) distinction between three types of development: in the diaspora, through the diaspora, and by the diaspora. Using the data from the DIMECCE survey as well as interviews conducted in Sweden, they argued that AWB facilitates development at all these three levels, thus it works as an agent for change and could serve as a role-model for other migrant organisations.

Middle Eastern Christian narratives on identity and belonging in Europe was the theme of the second session chaired by Marta Woźniak. In the first paper, Bachar Malki presented the results of his quantitative analysis of media discourse and interviews with Syriacs in Belgium whom he addressed as a double minority. He also discussed Christian and Muslim immigrants strategies of acculturation and attitudes of the majority group towards different immigrants. His Social Psychology approach added a new dimension to the methods used in the DIMECCE project.

The remaining two papers on the panel explored the situation of Middle Eastern Christians in Austria. Andreas Schmoller talked about his preliminary findings in regards to the Middle Eastern Christians in Austria, mainly Copts and Syriac Orthodox. He emphasised both the historical dimension of close ties between Catholic and Oriental Churches which is echoed in ecumenical narratives, and the contemporary dimension which focuses on narratives of the persecution of Christians in the Middle East. He outlined the different methods and sources he is using in the project: archival research, oral history, narrative and discourse analysis.

Heidi Armbruster, who has recently published a book ‘Keeping the Faith: Syriac Christian Diasporas’ focused on one group – Syriac Christians from Turkey in Vienna. Based on the ethnographic fieldwork both in Anatolia and Austria (Vienna), her main argument was that experiences of persecution in the homeland became incorporated into the life story of migrants of later generations. The paper focused on how parts of parents’ personal narratives, especially these related to Seyfo (Syriac genocide in 1915), are remembered and transformed by their adult children who develop a different kind of belonging.

The third panel entitled Middle Eastern Christians in Europe: Community and Country Case Studies was chaired by Dorota Ściślewska. Michał Moch’s presentation dealt with the complex identity of Maronites in Europe. He characterized this community as being both a tribal and religious one which has a collective consciousness which is deeply rooted in a history based on interpretations and mythologies, shaped in the Westernized modern Maronite milieu.

Suha Shakkour discussed Christian Palestinians’ self-imposed exile to Britain, examining how well they have assimilated into British society, and how their status as Christians has affected their sense of identity. She noted that in contrast to their Muslim counterparts, their Christian faith has enabled Christian Palestinians to shed the double minority status they hold in the Middle East and facilitated their integration into Western society.

The final session of the workshop was a summary of the main themes and general discussion. It was apparent that the majority of the participants use similar methodologies (qualitative research) but also face analogous challenges. One is the issue of naming the groups in question: Is the term ‘Middle Eastern Christians’ relevant and broadly accepted by the community members? In which countries and contexts it is proper and in which improper to call them ‘Oriental Christians’? When should someone be called Assyrian or Syriac? The DIMECCE team explained the importance of allowing interviewees to choose their own identities during the ‘identity cards’ exercise which was greeted favourably by other workshop participants. Moreover, ‘double minority’ and ‘minority within the minority’ terms were discussed and various theorists evoked.

As well as thought-provoking methodological debates, one of the biggest achievements of the workshop was gathering in an academic, yet comfortable and amiable setting, some of the few researchers who work specifically on the Middle Eastern Christians in Europe but had not had an opportunity to meet and network before. The first fruit of this newly established acquaintance will be an edited volume of selected workshop papers. Hopefully, the cooperation will develop further in the future.