The aim of this first DIMECCE research workshop was to bring together international scholars to discuss empirical, conceptual and methodological questions of relevance to the study of faith-based communities and minorities in Europe in order to prepare the project researchers for the upcoming fieldwork. Apart from the DIMECCE team (Fiona McCallum, Lise Paulsen Galal, Marta Wozniak, Sara Lei Sparre and Alistair Hunter), 13 invited scholars from a variety of universities and institutions in the UK, Denmark, Sweden, Norway, and Lebanon participated in the event.

After a short welcome by the hosting Danish team, project leader Fiona McCallum made a general introduction to the overall aim and activities of the DIMECCE project. This was followed by three short presentations, in which the research teams of each country presented preliminary findings of the particular context and situation of Middle Eastern Christians along with ideas for possible analytical perspectives.

Fiona McCallum and Alistair Hunter discussed the politics of immigration and integration as a significant context for the study of Middle Eastern Christians migrants in the UK. Furthermore, concepts such as ‘super-diversity’ (Vertovec 2007), misrecognition of Middle Eastern Christians as Muslims, intersectionality of age, generation, gender, etc. were suggested as relevant analytical perspectives.

Lise Paulsen Galal and Sara Lei Sparre gave a short overview of the numbers and general migration story of Iraqis and Egyptian immigrants in Denmark as well as preliminary findings on relevant churches and denominations in Aarhus and Copenhagen. ‘Generation’ and ‘transnationality’ were suggested as possible analytical perspectives contributing to both temporal and spatial aspects in the study of practices and identifications among Middle Eastern Christians in Denmark. 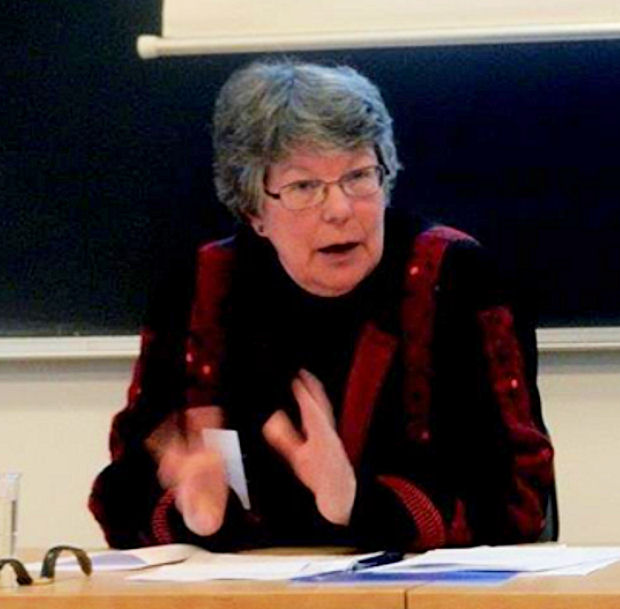 Paul Tabar focused on Christian migrants in Sydney, Australia and how they cope with the migrant experience. Among other things, Tabar suggested a critical discussion of where to draw the line between ethnic, national and religious identity as well as an awareness of the differences in meaning between the concepts of transnationalism and diaspora. In the discussions following the presentations, questions and comments mainly addressed challenges and pitfalls concerning the minority concept as well as models of state-church relations. 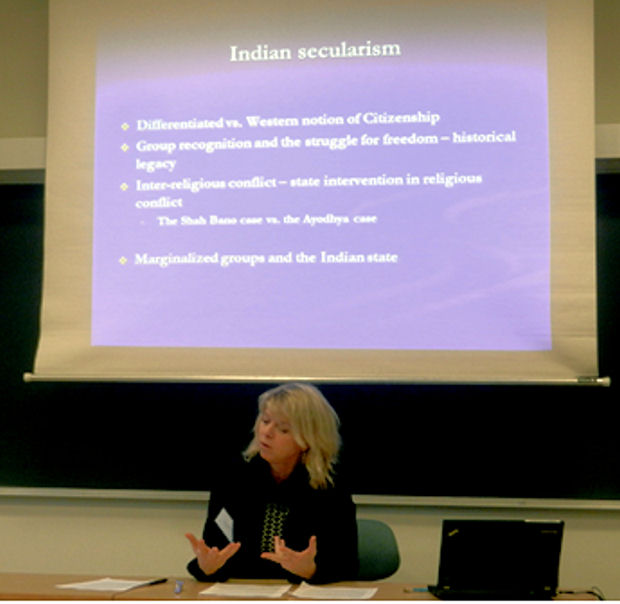 Discourses and practices of religion and secularism was the theme of the second session. In her presentation, Catarina Kinnvall addressed citizenship discourses in the Indian context. She raised the questions: How can discourses that rely on religion include other societal groups? And in what sense do some religious narratives become dominant? She answered these questions by analyzing the conflation of narratives on religion, belonging and security.

Berit Thorbjørnsrud discussed the role of Orthodox priests in Norway by contesting the idea of a clericalisation process which Valerie Karras (2005) has argued is the case in the US. She argued that the role of the priest is dependent upon the national context. Compared to the US context, Norwegian laws and parallel orthodox jurisdictions create different possibilities for authority, influencing the role of the orthodox priest. Although still key individuals, orthodox priests are not particular powerful in the Norwegian context. In the discussion session, questions and comments mainly addressed practices and room for manoeuvre among members of the different Christians denominations in Scandinavia.

After lunch the fourth session on Methodological challenges in the study of religious communities began with a presentation by Gurchathen Sanghera focusing on dilemmas related to gatekeepers and positionality during fieldwork in a context like Bradford, UK. He argued that access to informants is formed by the politicization of the research context wherein gatekeepers have their own interests. Consequently, the positioning of the researcher as insider or outsider is unstable.

Garbi Schmidt continued the focus on working in an urban neighborhood by discussing her research in Nørrebro, a neighbourhood in Copenhagen that has been a center of immigration for more than 100 years. She emphasized the importance of the urban context as a place turning into a space for interaction. In the discussion, the different histories of Nørrebro and Bradford came into focus as well as the responsibility of the researcher to return to his/her informants with relevant information about his/her research results. 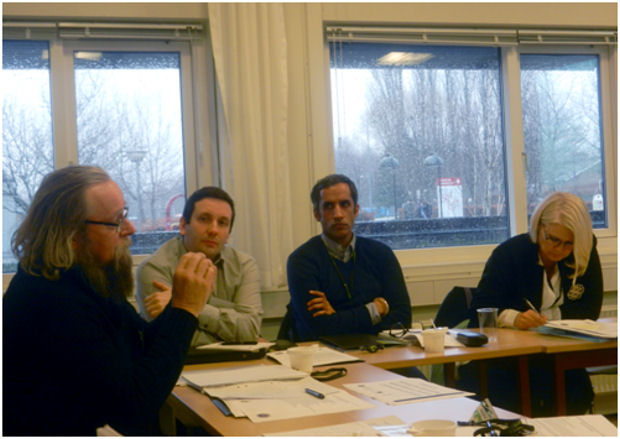 The final section of the day introduced the DIMECCE team’s work in producing and publishing a survey addressing the case communities in Sweden, Denmark and United Kingdom. Marta Wozniak gave a humorous and interesting review of the process. Not surprisingly the process of formulating the survey questions had revealed that particular categories and issues that were considered politically sensitive differed not only from case country to case country but also between scholars from different disciplines. The translation of the English language survey into Danish, Swedish and Arabic exposed this even more clearly and offered important insights into the influence of the context on the case study communities.

In the last part of the workshop, Lisbet Christoffersen and Heiko Henkel each gave their comments to what they – based on the day’s presentations and discussions – found of particular relevance to the DIMECCE project. They both stressed the importance of clarifying the relationship between individuals, churches and communities as to the project’s object(s) of study and how the project draws boundaries around them.Furthermore, Christoffersen pointed at the methodological challenges of studying ‘encounters’ and ‘contexts’, supported by Henkel’s emphasis on the influence of different citizenship regimes. Christofferson also suggested that the planned academic output of the project should be presented clearly on the project website, while Henkel recommended that the multi-disciplinarity of the team should be highlighted on the website as an asset.

Overall, this first DIMECCE research workshop met its objectives; it was inspiring and productive, and everyone enjoyed it!