Recently, scholars have agreed that early-medieval liturgy was by no means static and fixed, but rather flexible and full of variations. This was also true for the least flexible of liturgical celebrations, that of the Holy Mass. The readings from the Bible, the sermon and the proper prayers were the most variable elements in the celebration of the Eucharist. The last element, the proper prayers (proprium), are of greatest interest here. These prayers, performed by the priest at the opening (collecta), over the offerings (secreta/super oblata) and after the communion (ad complendum/post communionem) were collected in separate manuscripts, called sacramentaries. Proper prayers were variable, because they could be adapted to the feast of particular saints, votive masses or temporal feasts.

In the Early Middle Ages, there were various options for the composition of proper prayers to choose from. In the wake of the Carolingian reform movement, a particular type of sacramentary, called the Gregorianum Hadrianum, was introduced to the Carolingian court by Charlemagne between 784 and 791. This was not a popular sacramentary, because it was designed for papal use and not adjusted to the Frankish needs. For that reason, Benedict of Aniane (d. 821) wrote a supplement to the Hadrianum, using older, so-called Gelasian elements to make it fit for non-papal use in Gaul. This new supplemented Gregorianum Hadrianum sacramentary became very popular across the Carolingian realm, and in the tenth century too, we see that this type of sacramentary (it still had quite a number of structural variations) was widely distributed. 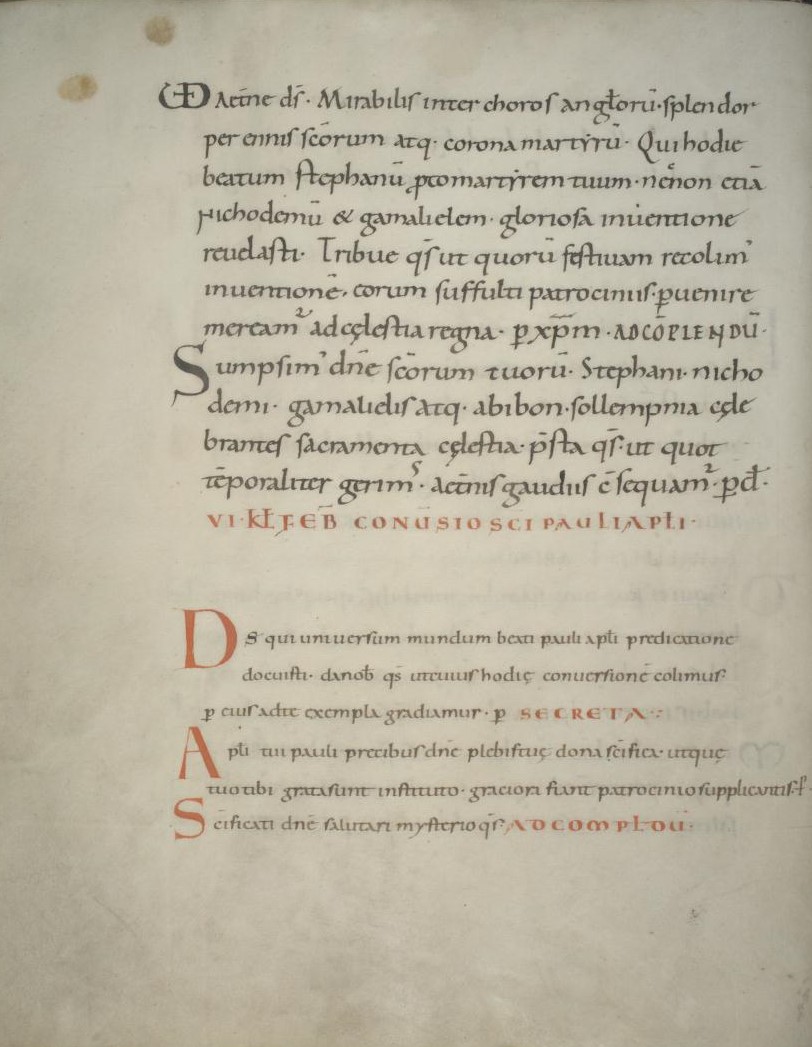 Cologne, Dombibliothek cod. 88 is one of these kinds of supplemented Hadrianum sacramentaries. It was produced in the tenth century by a single hand from the school of Fulda. This sacramentary, however, may not have been produced with a specific local community in mind as intended audience, but rather as part of a collating exercise, where texts from different local centres were brought together. The calendar points towards its use in Cologne, while the Canon of the Mass mentions an abbot from St Gall and the scribe may have been trained in Fulda. A few additional quires, added in the late tenth century, as well as later additions in the calendar, suggest it moved to Trier. Here, we see that the person who brought this manuscript with him or her had passed through different monasteries and asked local scribes to copy additional masses into the sacramentary.

This separate unit of additional masses was written by four distinct scribes. These hands followed each other in the same quire and in some instances on the same folio. Each of the scribes had different interests, which suggests they originated from different centres. There is one element, though, which they had in common: none of the masses could be found in the main sacramentary. Often, the sources from which prayers and masses were constructed preceded the Carolingian origin of the sacramentary. The anonymous collector of masses was in search of different, local material.

The first scribe wrote down only a single mass for the recovery of the relics of Stephen and the other first-century figures Nicodemus, Gamalien and Abibon. The mass differs from the one copied into the main sacramentary.

The second scribe followed directly after the first, but they copied a complete and chronologically-ordered collection of masses, starting with the Conversion of St Paul in January and ending with St Andrew in December. The inclusion of masses for the local Trier patrons Maximinus, Paulinus and Nicetius suggests that the collection was produced for a Trier community. Since Maximinus is honoured with two masses instead of one, scholars have argued that it was produced for the royal monastery of St Maximinus.

The third scribe copied a small collection for local Trier patrons too. He inserted two masses, for Marus and Felix, which appear to be newly composed. Marus was a fifth-cenury bishop of Trier who was said to have renovated the church of St Paulinus. Felix, who was bishop a century before Marus, had been responsible for the translation of the bones of St Paulinus, the patron of said church. It is therefore likely that this set of two masses originated from the community of St Paulinus, a community located only a five- minute walk from St Maximinus.

The last scribe shows particular interest in female saints, including Petronella, Scholastica the sister of Benedict, Margaret, Mary Magdalene and Soteris. It is hard to trace the exact origin of the collection of masses, but we are probably dealing with a female Benedictine community. The lack of chronology and variations in the structure of the masses suggest that this compendium was copied from different sources.

So, what does this sacramentary with its local additions tell us about the liturgy of the Holy Mass? First of all, it supports the argument that liturgy in the tenth century was not a static concept, and that local adaptations and variations were omnipresent. In some cases, the local additional material incorporated a different mass for a feast that was also observed in the main sacramentary, suggesting that variation was not a problem. Furthermore, it implies that monastic and religious centres actively sought out complementary local liturgy that supplemented the more generally used Carolingian material with that from different origins. The coherent collection copied by the second scribe suggests this local material may have been kept in separate libelli. Lastly, this sacramentary shows that at least one scholar, a monk or nun, priest or bishop, moved around Cologne, Fulda and Trier, collecting this material. This provides insight into the way local material could be distributed across different regions. I imagine there were many such people collecting liturgical material and then perhaps introducing it to other centres where it was adapted again to local needs. It shows us not only that liturgy was variable, but how it became so variable.