Over the last two decades there has been much discussion of why so few women are described as hostages in early medieval sources. Yet to date, there has been very limited interest in the role of women as active participants in hostage practices, here interpreted as brokering agreements, giving hostages, receiving them, or releasing those in their custody. Medieval hostages formed an important part of diplomacy and politico-social interaction across Europe and beyond; used to guarantee promises or secure the release of captives, their role could also encompass what we might term ‘safe passage’ – a party might give hostages to back up their promise others would not be harmed as they fled a siege, or travelled through unfriendly territory. 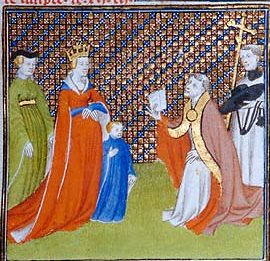 The account considered below is (to my knowledge) the only evidence that refers unambiguously to an early medieval woman receiving hostages in Britain or on the continent. Not only that, but it represents the only extant case of a hostage-donation made from a continental European kingdom to an English or British recipient in the early medieval period. It has not featured to date in either discussions of Eadgifu or in scholarship considering hostage-giving practices.The lack of attention to this account is puzzling, but the fact that it is in a relatively obscure source has perhaps cast it in further shadow.

‘… after the death of King Rudolph, Hugh the Great, together with the Franks, summoning Archbishop William, sent him to Eadgifu, the wife of the aforesaid Charles the Simple, so that he would bring back her son Louis. For she had fled to her father, the king of the English, due to her fear of Heribert and Hugh. And Archbishop William, coming there, having given hostages under pledge and oath to his mother Eadgifu, brought Louis back to Francia’ (translation my own)

The story is preserved in the Historia Francorum Senonensis a compilatory local history prepared in Sens between 1015 and 1034, by persons unknown. The hostage donation described within took place in England in 936 during the reign of King Æthelstan, but to understand this extraordinary account more fully, it is helpful to place it in the context of the vicissitudes of West Frankish politics in the 920s.

In June 922 the inhabitants of West Francia first deposed and then captured their king Charles the Simple. Shortly after, Charles’ infant son Louis was spirited to England for his protection . This was not simply a matter of geographical expediency; Louis’ mother Eadgifu was the daughter of the reigning king Edward the Elder (d. 924). Louis remained in England under the protection of first Edward and then his son Æthelstan until he was about fourteen years old. Eadgifu’s location between the time of her husband’s deposition and her son’s return is uncertain; glimpses of her activities give the sense that she played a vitally important role in building a network of kin-groups and dynasties in the early tenth century, and may well have remained on the continent for some years after her son’s departure.

In 936 a power vacuum in the West Frankish kingdom emerged after the death of King Rudolph, and Eadgifu’s hard work paid dividends, as Hugh the Great declared Louis the only viable candidate. Preparations thus began to retrieve Louis from England and bring him back to Francia to be made king. Two of the most well-known tenth-century voices , Flodoard of Rheims and Richer of Reims, writing in the mid and later tenth century respectively, give the impression that the great men on each side of the Channel – Hugh the Great and Æthelstan – negotiated and orchestrated Louis’ return to Francia. Only the anonymous author of the Historia Francorum Senonensis claims that Eadgifu was instrumental in negotiating for Louis’ ascension.

The hostages guaranteed Louis’ safe passage as he made his way from England to Francia, and perhaps also ensured Hugh kept to his word and protected the young king. It is important to reiterate that the Historia’s author claims William travelled not to Æthelstan or Louis, but expressly to Eadgifu, who personally received the oaths and hostages to secure her son’s assumption of the kingship. No other source mentions William’s or Eadgifu’s participation in the negotiations that attended Louis return to Francia, nor that hostages were used to secure the transaction.

The question, then, is how much faith should we put in the Sens account? Relatively little work on the Historia has been undertaken, but I would contend that we ought to take the author of this particular passage seriously. The compiler(s) at Sens would hardly miss the opportunity to record the participation of their archbishop in the accession of Louis to the throne, and the dominance of Rémois narratives of this period, recently discussed by Fraser McNair, also perhaps explains why William’s involvement was not celebrated outside of his archdiocese. Crucially, it is hard to come up with any reason for inventing such a story almost one hundred years later, when the stars of Eadgifu and Louis had waned considerably.

19th century drawing of Eadgifu. Image in the public domain.

In Eadgifu’s entry in the Oxford Dictionary of National Biography, one of the lengthier considerations of her life and career, Jinty Nelson writes of her sense that the dowager queen had played an instrumental role in her son’s reinstatement. The testimony of the Historia Francorum Senonensis confirms this suspicion, showing that, at least at Sens, Eadgifu was remembered as having personally brokered Louis’ return and accession. Nor was her role as a recipient of hostages perceived to be anything out of the ordinary: instead, her prominence as a negotiator and political player is evident from the author’s assertion that Hugh the Great sent his mediator William directly to Eadgifu. Even a cynical view of the historical validity of the narrative must allow for the fact that its author clearly believed a woman such as Eadgifu could receive hostages to secure her son’s safety, and considered this worthy of inclusion.

Eadgifu evidently returned to Francia at some point after 936, marrying Heribert II of Vermandois to her son’s great consternation.  Hugh and Louis had a fractious relationship, with the former implicated  in Louis’ capture by vikings in 944. Yet in 936, Hugh seems to have positioned himself as a supporter and protector of Louis. That Eadgifu and Louis nevertheless required hostages is perhaps unsurprising given Hugh’s claims to the throne and enmity towards Charles. While Richer’s account suggests Hugh behaved with honour and stood aside in favour of Louis, the Historia reveals that greater assurances than oaths may have been required for Louis’ family to entrust him to the duke.