Henry I, known as ‘The Fowler’, was the first ruler of the new Ottonian dynasty (named after his son Otto I). His rule is often seen as a new phase in East Frankish kingship, distinct both from the members of the Carolingian dynasty whom he followed and that of his son Otto I.  On 11 August 926, at Rohr, Henry freed the priest Baldmunt from slavery; the diploma that records this act shows Henry and those around him engaging with the legal output of his Carolingian forebears through both ritual act and the written word. The edition of the text is available here, while a digital image of the original is located here:

In the name of the holy and indivisible Trinity. Henry, king by the benevolent mercy of God. Let it be known to all our present and future faithful that we, at the entreaties of Arnulf our faithful and beloved duke, dismiss a certain priest in our possession named Baldmunt, a slave born into the household of the monastery of Kempten, for the advancement of eternal reward, by the striking of a denarius from his hand in the presence of our faithful according to Salic law, and release him from every yoke of forced servitude. We have confirmed his manumission by our written authority, which we desire should remain firm and unshaken for all time, and therefore we order by the sceptre of royal decree that the aforementioned reverend priest Baldmunt should henceforth have the same legal standing and freedom that other freed slaves who had been given their liberty in this manner by Frankish kings or emperors received. And in order that this decree of ours should remain firm and stable, we have ordered this to be sealed with the sign of our ring below.

Given on 11 August in the year 926 after the Incarnation of our Lord, in the fourteenth indiction, in the eighth year of the reign of the glorious king Henry; given at Rohr; in the name of God, happily. Amen. 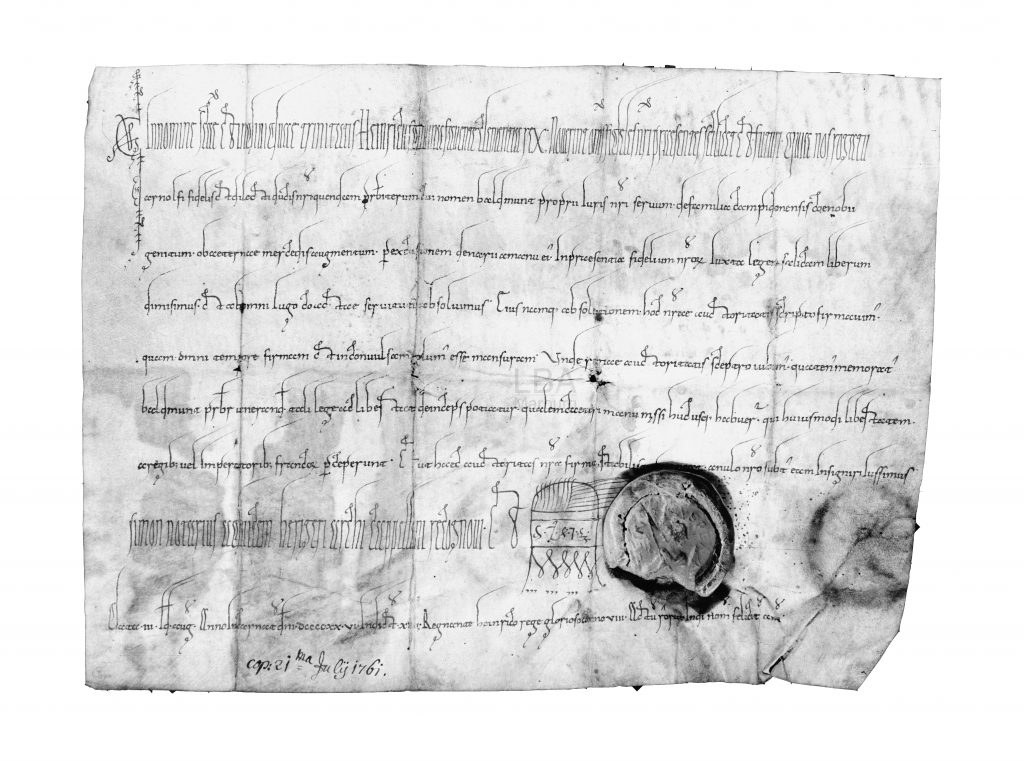 Facsimile of Henry’s charter, reproduced with permission of the Bavarian State Archive.

Henry’s grant survives in its original form, on what is known as a ‘single sheet’, now preserved at the Bayerische Hauptstaatsarchiv in Munich. The text of the diploma reveals the intersection of performative ritual and the written document: Baldmunt is only freed when these two combine. First a penny must be struck from his hand (more on which below), and then his freedom must be confirmed and secured by the production of a written document stating that the king has released him from his ownership. The document is then made more secure through the addition of Henry’s seal, and finally is authenticated by his chancellor. 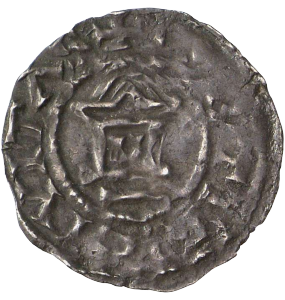 Obverse of silver penny of Henry I issued at Metz. Munzkabinett Catalogue no. 18202363 Reproduced under Creative Commons BY-NC-SA 3.0 EN.

The act of freeing a slave by throwing or striking a penny from their hands has a long history, and is first attested in documents issued during the rule of the Merovingian dynasty over Francia (c. 450–752).

Eleven diplomas issued by Carolingian kings in the ninth and early tenth centuries show the continued practice of striking a penny from a slave’s hand to free them. That all of these diplomas were issued by kings ruling in Lotharingia or East Francia suggests it might have been a practice exclusive to or particularly popular in a specific part of the empire. This regional tendency continued under the Ottonian dynasty, again implying a local custom rather than a normative practice carried out throughout the former Carolingian empire.

In this case, the first diploma issued by a non-Carolingian king to mention the practice of striking a penny to free a slave, the household priest Baldmunt was given his freedom. The fact that Baldmunt was both a slave and a priest has not escaped the notice of scholars, and despite frequent promulgations that priests should be manumitted before their appointments, in practice this continued to be ignored.

Henry’s diploma explicitly places him as one in a long line of kings to have participated in the activity of manumitting slaves. Although he is not described as king of a specific territory in the text, the draftsman of the document aligns him with Carolingian and perhaps even Merovingian kings in the statement that ‘other freed slaves … had been given their liberty in this manner by Frankish kings or emperors’. We can therefore say that Henry’s draftsman knew of earlier diplomas or practices granting similar liberty, and wished to portray him in this tradition.

There are subtle differences within the corpus of diplomas mentioning this practice, however. Those issued by Carolingian kings before 888 describe the action in identical terms, suggesting direct textual borrowing between the corpus of diplomas. But those issued after 888, when an illegitimate line of Carolingian rulers assumed power, show greater variation and experimentation, suggesting their draftsmen sought ways to distinguish the kings. Henry’s diploma shows us that little had changed, and while textual experimentation continued, together, the act of freeing slaves became an important expression of their power. In many cases the manumission was petitioned for and witnessed by pre-eminent members of the nobility, both lay and ecclesiastic. Henry’s diploma therefore points more to continuity and awareness of the past than rupture. 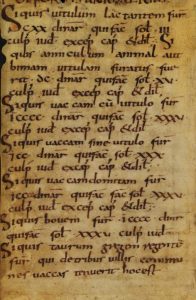 The first page from the Lex Salica as preserved in the 10th-century Staatsbibliothek Bamberg Msc.Bibl.30c, 1r. Reproduced with permission of the library.

On the other hand, the charter’s draftsman describes the act of manumission as being carried out according to the Lex Salica, a legal code attributed to the Merovingian king Clovis in the early sixth century. We can thus—unusually—see direct influence of a legal text on the practice of rulership in this period. But in fact the Lex Salica only mentions manumission very briefly. Instead, it is the seventh-century Lex Ribuaria that describes two procedures for manumission. One of these is ‘according to the law of the Ribuarians’, and involved the penny throw. The other was ‘according to the law of the Romans’, and involved written charters, with a ceremony to be performed in a church.

But no extant charter mentions the Ribuarian law. Because the two law codes, Salic and Ribuarian, were frequently transmitted together in their written form, it is possible the draftsmen of these diplomas simply conflated the two (as Hubert Mordek argued, and Thomas Faulkner has discussed in detail). We therefore see here in the diploma of Henry and those that preceded it that a call to the authority of the ‘Salic law’ reflected more closely a dependence on earlier diplomas issued by the Carolingian dynasty than it reflected consultation of the law codes.

Whether issues in the ninth, tenth or eleventh century, such texts and documents presented claims of legitimacy and political power that would in turn be read and reused by those tasked with drafting documents for successive kings. In building a kind of patchwork of innovation and reflection, scribes and draftsmen indicate simultaneously consciousness of a rupture with the past, but also its used to support and justify claims and actions in the lived present.