Later this month, heads of state throughout the world will deliver their Christmas messages, which tend to stress reconciliation and unity, but can also, more rarely, contain words of admonition and even invective. Although the modern ‘Christmas message’ given by heads of state on national television is a relatively recent invention, the feast has been used by leaders of all stripes as an opportunity to convey important messages to their subjects for a very long time. As Sarah Greer showed in her blog post for last year’s December, the Ottonians used the holiday to give lustre to royal coronations, and to reconcile with former rivals. In this blog post, I will turn to a different kind of tenth-century leader figure: the bishop. What were their Christmas messages? 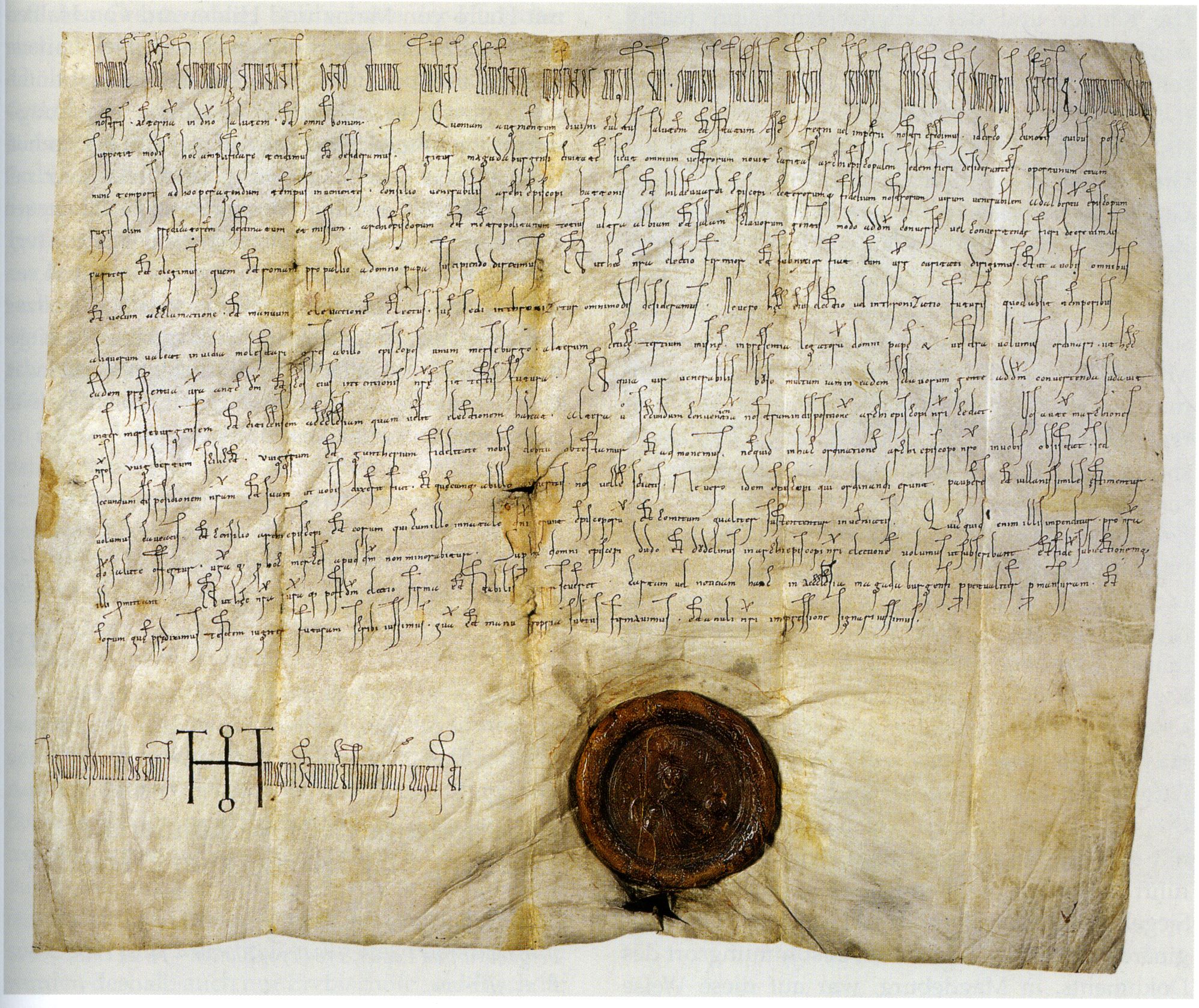 Charter in which Otto notifies his magnates of having founded the Archbishopric of Magdeburg and of having installed Adalbert as its archbishopric, Magdeburg, Landesarchiv Sachsen-Anhalt, Rep. U 1, Tit. I, Nr. 31. Image in Public Domain, image credit Wikimedia Commons.

As religious leaders, bishops naturally played an important role in the royal coronations and reconciliations orchestrated by the Ottonian court during the feast days. Otto II was crowned emperor by the Pope on Christmas Day 967, and Otto III was crowned on Christmas Day 983 by the Archbishops of both Mainz and Ravenna. Yet Christmas was not only a time of the coronation of Ottonian kings: in at least one instance, it was also used to invest several bishops with their sees. In his chronicle, the bishop-historian Thietmar of Merseburg narrates how in 970, Emperor Otto promoted Adalbert of Trier to the bishopric of Magdeburg, ordering that ‘all the leading men of Saxony to be with him at the next celebration of Christmas’. Adalbert then took the opportunity to turn the event into a veritable celebration of diocesal unity, appointing several clerics suffragan to his archiepiscopal see. He was received in Magdeburg ‘with magnificence by the clergy and the whole populace’, and during the feast days he ‘consecrated Boso as first pastor of the church of Merseburg, Burchard as first overseer of the church of Meissen, and Hugh as first bishop of Zeitz’. Other bishops had already been consecrated earlier, but also attended the festivities: ‘Thietmar, first pastor of the church of Brandenburg who had been previously consecrated and Jordan first bishop of Poznan joined these brethern’.

The tenth-century equivalent of the modern Christmas message can be found in the sermon. During Christmas, bishops would have given sermons to their flocks with words of unity but also admonition. This is suggested by the sermon collection of Bishop Atto of Vercelli (r. 924-961), which contains a sermon for the feast of Christmas itself, and another one intended for the octave of Christmas. In the first sermon, Atto discusses the relationship between angels and humans, narrating how this developed over time. Before the incarnation of Jesus, angels saw themselves as superior over men because men had fallen into sinfulness. After the incarnation, angels no longer asked to be worshipped by humans, as they were now all fellow servants of God. The second sermon, held eight days after Christmas, was of a more admonitionary nature. In it, Atto criticizes those rich folk who only allow people to enter their houses when they bring a great number of presents. Instead of ordering their dependents to bring wine and food into their houses for the Christmas festivities, they should host the poor. Additionally, Atto attacks the superstitious beliefs of certain members of his flock who meddled in astrology. Most notably, they built their houses according to the stars, which would supposedly save the building from potential disasters. Atto referred to a recent calamity to show that these beliefs were false: in 924, the city of Pavia had been burned and pillaged by Hungarian raiders. Many of the buildings in this city had been built according to the same astrological beliefs Atto saw among his flock, but none had been spared from the fire. To Atto, Christmas was thus a time for instruction, admonition, and solidarity: his flock would learn about the relationship between angels and men, be admonished for their superstitious beliefs, but also be spurred to care for those less well-off.

Other bishops were faced by more acute political concerns during Christmas. During the feast days in 965, Bishop Rather of Verona was forced to deal with a rival’s attempts to undermine his position. Some four years before, Rather had displaced a certain Milo as bishop of Verona. Milo does not seem to have accepted this deposition, and was apparently spreading rumours about Rather, inciting the clergy against their bishop. Rather raised his invective against the person he calls ‘the violent attacker’ in the form of a letter, which was likely intended to be circulated among the clerics of the diocese so as to convince them of Rather’s cause. The bishop sets off on a conciliatory note: the high point of the celebration of Christmas is ‘the mystery of giving and taking the Sacrament’. But Rather was ‘doubtful’ whether he could perform the celebration ‘safely’, as ‘God himself’ had commanded that before offering the gift, one needed to be reconciled with his brother (Rather refers to the Gospel of Matthew, 5.23-25). Rather remained unapologetic: ‘Since I have to offer to God the gift of this feast, I desire to find the point of blame so that I can be reconciled, but I find none, except that I ventured to admit myself to the episcopacy of the Church of Verona for consecration’. Although it is unknown how Milo and his supporters reacted to this letter, it does seem to have had its desired effect, at least for the time being: Rather would hold on the bishopric for another few years. His Christmas might have ended on a cheerful note after all.