In this research blog, we have discussed several forms of using and not using the past. Now, I wish to relate to a type of past we have not yet come across: the past that does not appear to make sense. Instead of looking at the incentives authors had to communicate a certain message about the past to their  audience, I wish to share some explorations on the notices of a community’s history that at first glance do not seem to carry any historical or exemplary meaning, and do not make sense without background knowledge.

An example of this ‘senseless’ communication of the past is found in the lessons read during the Matins Office of a particular saint’s feast day. Performed by and for a religious community, these lessons were alternated with psalms and other chants, in particular antiphons, verses and responses. The lessons were often taken from a written narrative of the saint’s life. However, instead of giving a coherent summary of the saint’s life, these lessons were simply taken from the beginning of the vita, and continued with regular intervals until eight lessons were indicated. In practice, this resulted in a meagre coverage of the deeds of the saints. Sometimes, only the prologue, the youth of the saint or some of his early deeds were covered, leaving out most of the deeds of the saint, his death and miracles. Only rarely do these lessons cover a complete narrative of the deeds and miracles performed by a saint. When they do, the vitae may have been written with this liturgical practice in mind, shaping the written narrative of the local past.

Generally speaking, these lessons do not appear to have any informative function: one could say that their authority as a text was enough for the readers and listeners, without a desire to understand the separate content of each lesson. Perhaps, during other moments of the saint’s feast, a more coherent account of the saint’s past was communicated, for example during readings in the refectory. Nevertheless, we should not dismiss the possibility that these seemingly random lessons had some impact in shaping the communicated past of a community. 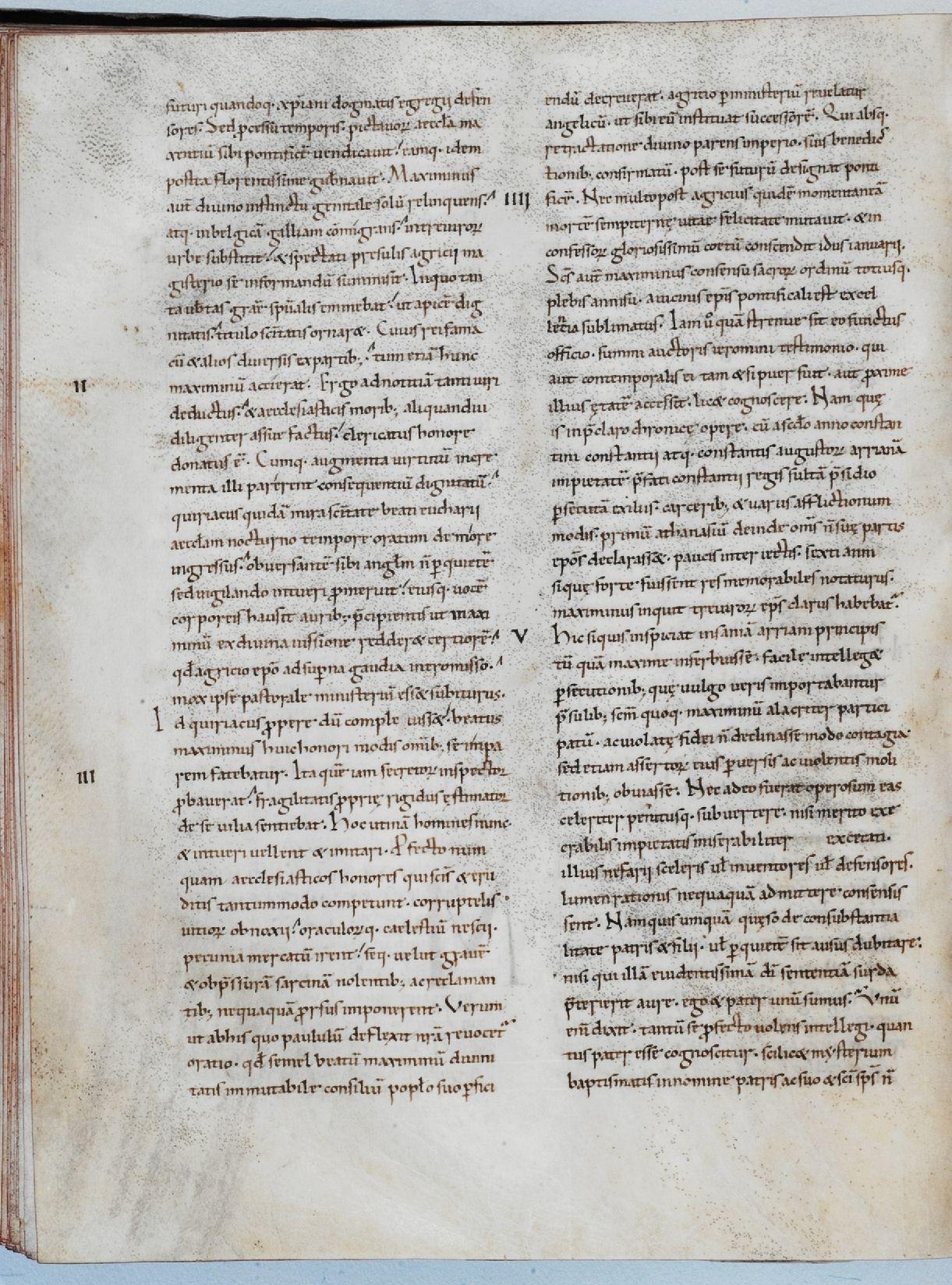 An interesting case is the lessons taken from the lives of two local Trier saints: Maximinus (ca. 329-346), the fifth archbishop of Trier, and his immediate successor Paulinus (347-358). Both saints were patrons of a church in Trier and were strongly embedded in local medieval society through their cults. The lessons taken from the life of Maximinus only include the first five chapters of the vita, covering only the ordination of Maximinus as successor of bishop Agritius and an elaborate account of the Arian conflict. The lessons presented in the vita Paulini are particularly uninformative, as they only include the first six chapters, dicussing Paulinus’ youth, and the ordination of his predecessor Maximinus and the translatio of his bones by Paulinus, and the Arian conflict. Thus, content-wise, monks or canons attending the Matins Office of the feasts of Maximinus and Paulinus would hear a similar narrative, neither very informative about the life and virtues of the saint. What these lessons did cover is the most historical chapter of the saints’ lives: the Arian conflict. The fourth-century emperor Constantius II resided in Trier, and he was an Arian. Understandably, the archbishops of that same city had trouble maintaining the orthodoxy of the people in Trier. In the end, – and this is not communicated in the lessons – Maximinus left Trier to go to his homeland Poitiers, and Paulinus was exiled to Phrygia. Altogether not a particularly succesful enterprise. Nevertheless, it is exactly this topos – conversion and the true faith – that integrated firmly into liturgical text on these saints.

The focus on the Arian conflict in the liturgy for Maximinus and Paulinus is reflected in other texts on these saints that circulated in the tenth and eleventh centuries. In some manuscripts, the vita of St Paulinus is supplemented by a notion naming the Arian emperors and a showing a list of other saints who were exiled to protect the true faith. In a prologue on the acts of Maximinus, preserved in an eleventh-century manuscript, both him and Paulinus were honoured for their performance against the Arians. Lastly, in a surviving fragment with chants sung during the Matins Office of St Maximinus’ feast day, the role the saint played in the Arian conflict is mentioned.

So, although the lessons read during the Matins Office on the feast of Maximinus and Paulinus do not function as a summary of the saints’ lives and do not appear to have had an exemplary purpose, the information communicated through the lessons did fit the trend of using the theme of the fight against Arianism in the liturgy for these saints. To the people in Trier, this was not an unfamiliar topic, as the founding bishops of Trier, Eucharius and his companions, were known for their conversion of the pagans. Through the liturgical lessons and other texts available in the tenth and eleventh centuries, Maximinus and Paulinus were integrated in the Trier community of local missionary saints.

In this exploration, no conclusive statement can be given on the exact role of the ‘senseless’ lessons read during the Matins Office. However, it does show that we must not be to hasty in our modern judgement on the character and perception of medieval liturgical texts.  Sometimes, a random collection of fragments of a saint’s life could, accidentally, make sense.