The Carolingian period generated two new different orientations of lay spirituality: (1) radical conversion that imitated the monastic spirituality while remaining in the world; and (2) the valorisation of some aspects of the laity (marriage, juridic and military functions, use of the power to serve the Church and the poor etc.). These phenomena were developed during the tenth century. It was then that “laic sanctity”, extolling the virtues of an active life, emerged. This could be lived out not only at the monastery, but also in the secular world. This “laic sanctity” unified the inner piety hiding deep in the heart with the exterior secular style of everyday life. Such a combination created a new type of saint, a pious layman, one of the most well-known models being St. Gerald of Aurillac who was the saint of the tenth century par excellence.

St. Gerald and his spiritual heritage

According to his Vita, St. Gerald (855-909) was prepared to continue the clerical path should he have been unable to accomplish his tasks as a nobleman. But later he received the title of count and realised himself as a pious and faithful governor. He carried out many pilgrimages to Rome and brought relics to St.-Peter Abbey (later called Saint-Géraud d’Aurillac). St. Gerald was distinguished by his chastity; his knowledge of Scripture; his care of the poor despite his noble origin and his richness; his humility; and his patience. He was known for his gift of miraculous healing even during his life-time.

Having become an inimitable model for aristocrats, desired to live in a Christian way but stay in the world, St. Gerald incarnated the idea of ancient nobility and southern religiosity. His Vita and his miracles were widespread in all parts of the Post-Carolingian Empire. The input of the hagiographic production concerning St. Gerald was mainly the affair of Cluniac monks. The life of St. Gerald was developed in three main versions:

It would seem that the diffusion of the cult of Gerald was strongly linked to the political and religious strategies of this time. In the later tenth and eleventh century Cluny received a series of papal privileges that confirmed and extended Cluny’s freedom, so that the Abbey was freed from all secular and spiritual authority, save that of the Pope. The desire of both centres of power to unify different religious communities under the Pope’s authority provides the context for their propulsion of the cult of St. Gerald. 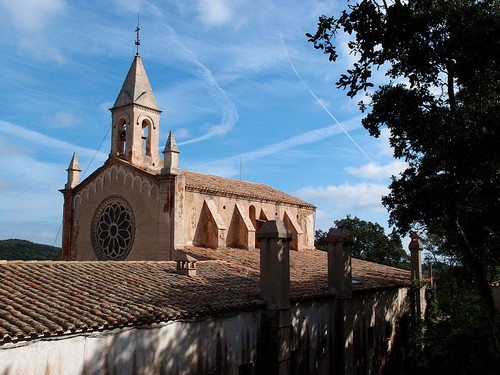 Sant Grau d’Ardenya, built in early 13thC, but according to legend a place where St Gerald himself spent time in the 9thC. Image credit Wikimedia Commons, CC BY 3.0.

In the Catalan region, the veneration of St. Gerald has left clear traces. For the feast on 13th October, the martyrologies in Girona, Vic and Sant Cugat from the tenth century mention: “Eodem die transitus sancti Geraldi confessoris”. The presence of this saint in other liturgical manuscripts is even more frequent. A number of calendars from the Catalan area as well as from Southern France attest the feast of St. Gerald in the eleventh century. The veneration of St. Gerald obviously arrived in the Catalan counties through southern French monasteries and canonic libraries, in particular from the Limousin region.

With regard to the life of St. Gerald by Odo of Cluny, it is surprising that there is no hagiographic copy conserved in Catalan archives before the thirteenth century. However, the recent article of J. Alturo i Perucho reveals a fragment with provenance from Vic that obviously used expressions from Vita Geraldi. This fragment is very probably a compilation of various famous texts of that time aiming to create a sermon for St. Galdric. According to Alturo i Perucho, this text can be dated by the bishopric of Guillem de Balsareny (1042-1076). Without having determined which one of three possible Vita Geraldi may have served as a model for the compiler, Alturo i Perucho suggests that this copy could have come to Vic through the monastery of Cuixa. 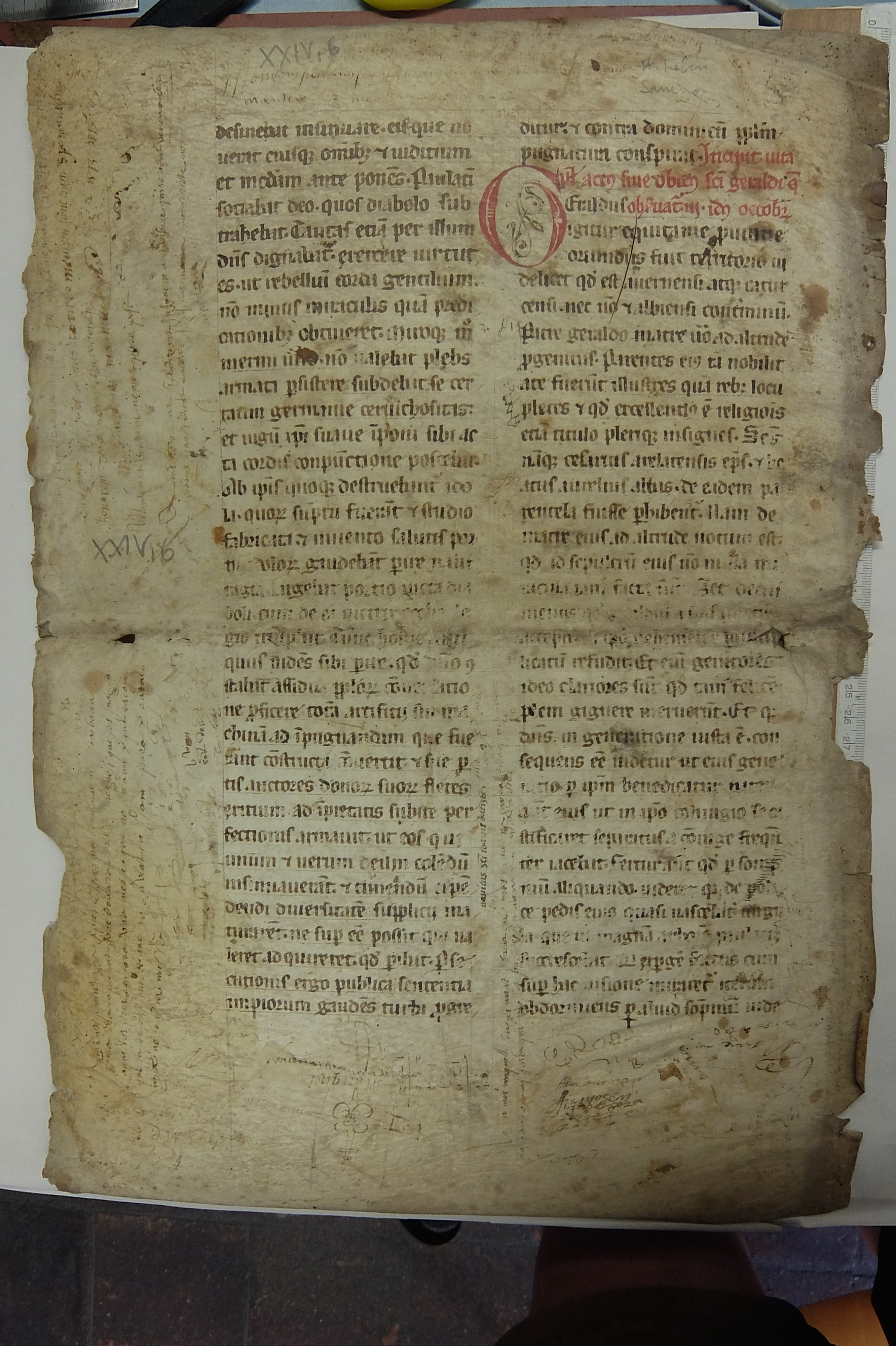 The earliest conserved copy of Vita proxilior prima (BHL 3411) belongs to the Library of Tarazona. It represents a manuscript copied in Barcelona at the beginning of the thirteenth century. (Ms. 89). This volume is a homiliary and legendary, containing many Spanish, French and Catalan saints. Another fragment is even later and belongs to the archive of Vic. It presents the copy made during the second half of the thirteenth century (XXIV, frag. 6). The bifolio contains on its recto part the passion of St. Denis and on its verso part the life of St. Gerald (BHL 3412).

These three testimonies therefore reveal the diffusion of different versions of Vita sancti Geraldi in the Catalan counties, something that could signify the transmission of texts by the Cluniac network of monasteries, as well as the active veneration of this saint in this region. However, the influence of Cluny in the Catalan regions was never strong and direct, and in the second half of the eleventh century it was expressed more by Moissac. Nevertheless, the circulation of several copies of his Vita suggests its frequent presence in the canonic libraries and its use for religious lectures during the eleventh century.

Moreover, as the feast of St. Gerald is attested in a many calendars and martyrologies throughout the Catalan region, the earlier copies of his Vita are probably simply not conserved. In any case, the cult of this saint was widespread in the territory of the Catalan counts. This is also attested by mention of his relics in the monastery of Cuixa, according to the letter of the monk Garsias in 1040.

Other dimensions of St. Gerald’s cult, a new cult for the Post-Carolingian space

All these traces for the veneration of the saint highlight the certain requirement of society at that time. The model of the saint who stays in the world trying to lead the pious life falls squarely within what we know about the development of the eremitic movement of the eleventh century. But it also provides the image of the sovereign transformed to the paragon of the holy warriors. This category of saints, attested in the Christian Antiquity, received a new lease of life from the tenth century on. And St. Gerald constituted an important part of this process.

In Occidental Europe in eleventh and twelfth century, some vitæ of Carolingian or Post-Carolingian saints participate in creating an atmosphere of sacralised struggle, even before the first Crusade. This notion of struggle is particular interesting in the case of Spain, where neighbourhood relations with Muslims always played a crucial role. D. Carraz highlights that cults to charismatic warriors in the early Middle Ages remained relatively localised. However, the cult of St. Gerald obviously descended to the Catalan regions, as liturgical sources witness. In all probability, the border situation in the Iberian peninsula should be viewed as one of the numerous symbolic dimensions of this cult, a dimension that was particularly actual in the eleventh and twelfth centuries.