In the Carolingian period, many attempts were made to consolidate the practice of liturgy in order to prevent Mass and the offices from being celebrated incorrectly: the Admonitio Generalis and the bulk of liturgical commentaries testify to this. Nevertheless, variety and innovation remained the norm through the ninth and tenth centuries, and manuscript material from this period shows that prayers, hymns, processions and other liturgical performances took many forms and shapes.

Not only prayer books and liturgical manuscripts provide evidence for the variation and innovation of liturgical practises in the tenth century: in hagiographical texts we find traces of liturgical innovations and variations in liturgical compositions. 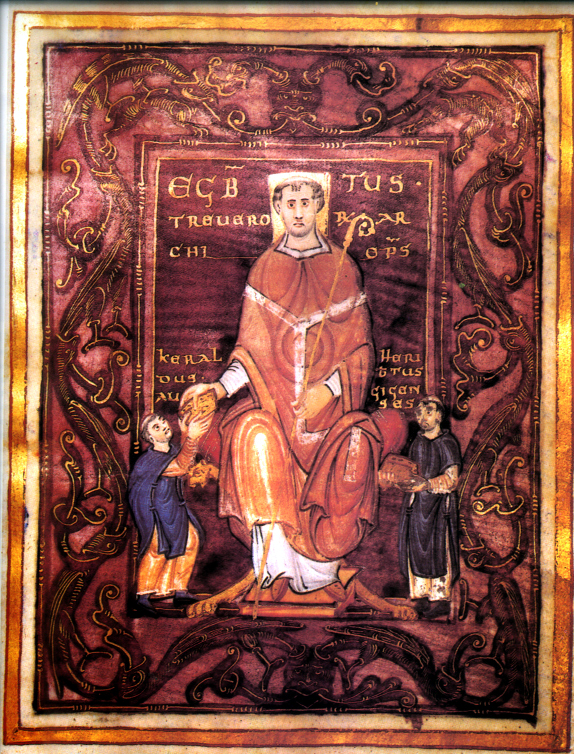 Examples of innovations are found in two hagiographical accounts written in the second half of the tenth century in Trier. The Historia Miraculorum (962-3) is a collection of miracles dedicated to the fourth-century archbishop of Trier St Maximinus. This miracle collection describes miracles performed by the saint from his grave. The second text is an account of the inventio of St Celsus, concerning the relics of a holy man who was discovered by Archbishop Egbert of Trier (975-993) during the renovation of the monastery of St Eucharius.

In two of the miracles in the Historia Miraculorum, recent liturgical innovations played a prominent role. In one chapter, a monk managed to expel demons from a boy by singing the Alleluia. In another miracle, a woman’s feet are healed the moment that modulated chant is sung during the nocturnes. Using these two types of chant so prominently in the miracles is not coincidental. These musical forms were not fixed in the tenth century. In fact, new versions of the Alleluia verse were composed in this period. Possibly, Sigehard, the author of the Historia Miraculorum, was actively promoting the implementation of newly-composed liturgical music.

Liturgy also featured significantly in the account of the invention of St Celsus. During the Mass Egbert celebrated for the newly-discovered saint, he exposed the bones of Celsus to the ordeal of fire. It is the earliest-known recorded instance in which a saint’s legitimacy is tested in this way and may be seen as a liturgical innovation. Thomas Head argued that it was an innovation instigated by Archbishop Egbert himself,  inspired by the survival of saints’ bones elsewhere and the Biblical story of the three boys who were saved in the fire.

Considering that both the Historia Miraculorum and the Inventio St Celsi show clear examples of liturgical innovation, and as they were both written in the second half of the tenth century, one can conclude they were products of their time. Indeed, it was a period of monastic reform and cultural and liturgical blossoming. Archbishop Egbert not only found relics of a new saint, he also commissioned lavish liturgical books, including the famous Egbert psalter, and richly decorated reliquaries for the staff of St Peter and the sandal of St Andrew. Meanwhile, the monastery of St Maximinus was one of the major royal monasteries involved in a reform movement during the abbacy of Ogo (934-45).

In this time of reform and liturgical innovation hagiographical works start to write about the correct celebration of Mass. In the inventio of St Celsus, the Mass celebrated by Archbishop Egbert for the invention of Celsus’ relics is elaborately described. A second Mass is celebrated by Egbert in the Miracula Celsi, after the first miracle performed by Celsus. Apparently, it was deemed useful to describe how the Mass was celebrated. The importance of a correct celebration of liturgy is emphasised in several chapters of the Historia Miraculorum. Quiriacus was prohibited from celebrating Mass when accusations were made of him reading the wrong literature during the matins office. Later in the text, an acolyte’s alb (vestment) caught fire during Mass when it became clear that he had sinned.

Thus, the theme of celebrating the Mass correctly was apparently revived in the hagiography of the late tenth century, though it was not unfamiliar to Trier’s earlier hagiography. In the sixth century, Gregory of Tours had already written about Nicetius’ refusal to celebrate Mass while excommunicated people attended. Hence, it is interesting to note that only in the second half of the tenth century, this theme made a come-back in Trier hagiography. Moreover, in the early eleventh-century vita Symeonis the Holy Mass occurred multiple times: the sight of a woman was restored during the service, and a paralysed man started walking again when Mass was celebrated.

Including Mass in hagiography to communicate the importance of its (correct) celebration was common across Trier from the second half of the tenth century, without being confined to any particular monastery. In fact, as it occurred in hagiography from the royal abbey of St Maximinus, the Benedictine monastery of St Eucharius and the canonical community of St Symeon, one could say that it was a concern shared across the religious communities of Trier in the late tenth century.