Carolingian Culture on the Peripheries and Bernhard Bischoff

One of my unanswered questions about Carolingian Studies in the 20th century is the role that the peripheries of Charlemagne’s Empire played in terms of culture and religion and what position these so-called marcae could establish in the Europe-wide network of knowledge transfer. This point of view leads us immediately to another unanswered question: what role did the Carolingian Spanish March (Catalonia) and Catalan manuscripts play in the scientific œuvre of Bernhard Bischoff (1906–1991), the famous German palaeographer and expert par excellence of 9th-century manuscript transmission? (Figure 1) Did he study at least some of the imported and indigenous copies of Carolingian text culture catalogued at his time? And which studies did he use to qualify the introduction of Carolingian minuscule in the Spanish March during the 9th century? 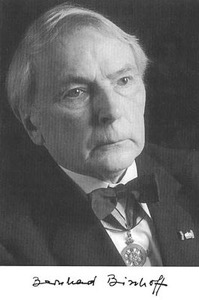 A closer look into his magisterial Paläographie des römischen Altertums und des abendländischen Mittelalters and into his posthumously published four-volume repertory of the continental 9th-century manuscripts on the one hand and a review of his publications and his also posthumously published Handschriftenarchiv on the other hand may uncover some unknown facets of his rich work on Carolingian culture. Finally, we try to detect his relationship to his slightly younger colleague Anscari Manuel Mundó i Marcet (1923–2012), who at Bischoff’s time was the expert of manuscript transmission in Catalonia.

The Introduction of the Carolingian Minuscule in the Spanish March

With regard to the history of Carolingian minuscule in the Iberian Peninsula, Bischoff tells us that Catalonia was an exception in Spain in not continuing the use of the characteristic younger Visigothic minuscule until the early 12th century (or even later) and that this change of script took place in Catalonia long before the Cluniac influence and Pope Gregory’s VII liturgical reform in Spain during the 11th century. Bischoff does not detail exactly the advance of the new Carolingian minuscule – he sees this phenomenon developing simultaneously to the use of the Visigothic script until the early 9th century – and mentions only the renowned monastery of Ripoll as a Catalan centre of its use. He thus does not problematize a) the long phase of replacement of the Visigothic minuscule during the 9th century, b) the phenomenon of hybrid minuscule types (either still Visigothic minuscule under Carolingian influence, or already Carolingian minuscule with Visigothic substrate), c) the role that Girona, Vic and Barcelona played alongside Ripoll (and possibly other monasteries under Carolingian influence) and d) the problem of which types of Carolingian minuscule were imported (from Narbonne, Lyons, Tours …) and finally predominated in the new writing. These are all topics belonging to a more recent phase of in-depth research already beyond Bischoff’s palaeographical horizon, which was still that of the first half of the 20th century and his teacher Paul Lehmann (1884–1964), a disciple of Ludwig Traube (1861–1907). 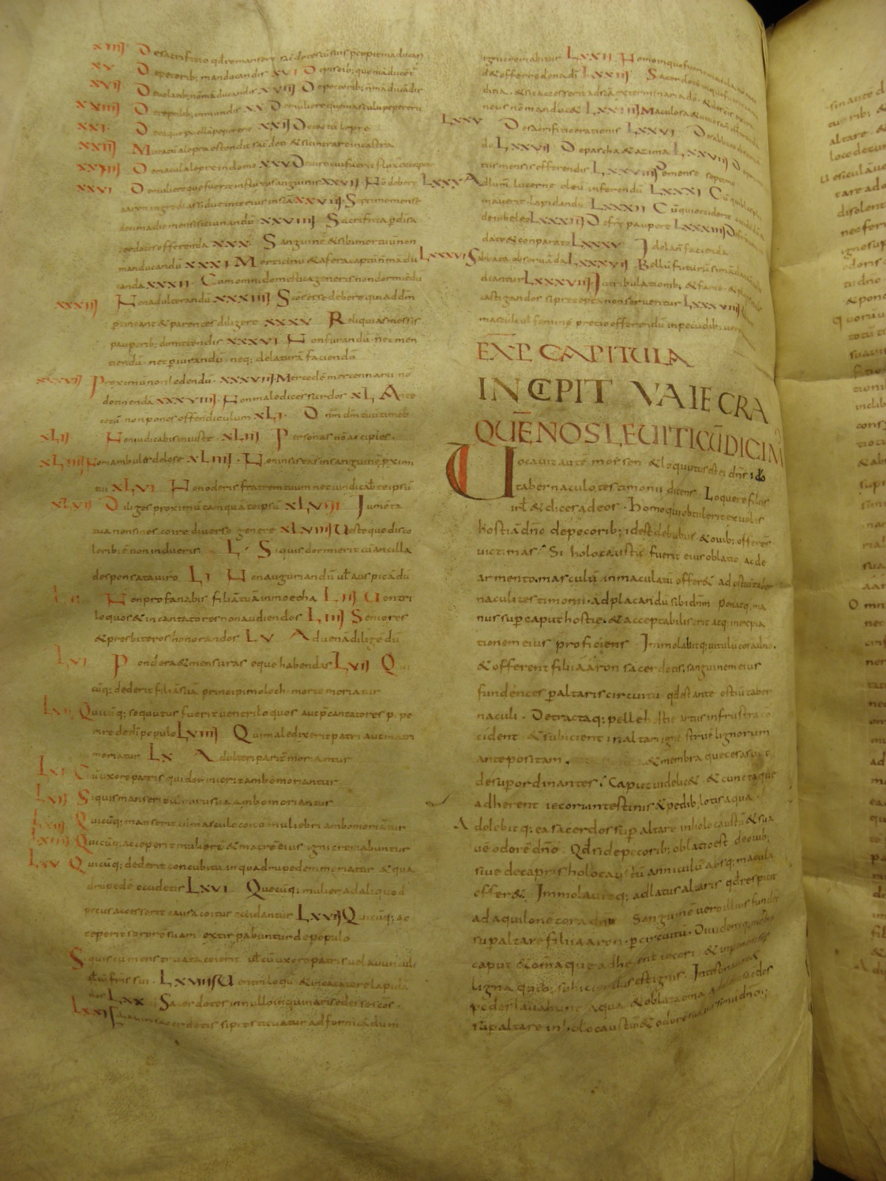 Given this panorama, two phenomena come to the forefront of research: On the one hand, some 9th-century manuscripts in Catalan collections, already known to Bischoff – at least from pictures – can now be located and dated more precisely. The both most prominent manuscripts of this category are preserved in the Cathedral Library of La Seu d’Urgell under the shelfmarks Ms. 1997 and Ms. 2006. The first is a Carolingian giant Bible (Figure 2), quoted by Bischoff without any shelfmark and tentatively located to the region (Umkreis) of Tours, but without any concrete date. We seemingly deal here with an older state of the art that he could not revise shortly before his death. The most recent opinion on this manuscript formulated by Jesús Alturo i Perucho (* 1954) is that we deal with a local product of Urgell from ca. 900, but I would suggest that we should not exclude the implication of a Tours Bible in the production process of this wonderful copy. The other Urgell manuscript contains the Collectio canonum Dionysio-Hadriana, thus an authoritative Carolingian collection of Church law, of which only another, later copy from Ripoll is currently known from early medieval Catalonia. Bischoff again gives only older information on the Urgell copy and suggests a scriptorium of Western Francia (Frankreich) as place of origin of this manuscript, but without delivering any date. The manuscript belongs to the second half or the last quarter of the 9th century, but the location of production and the circumstances around its arrival at the episcopal see in the Pyrenees needs more investigation for a more precise location than Central France once suggested by Pere Pujol i Tubau. 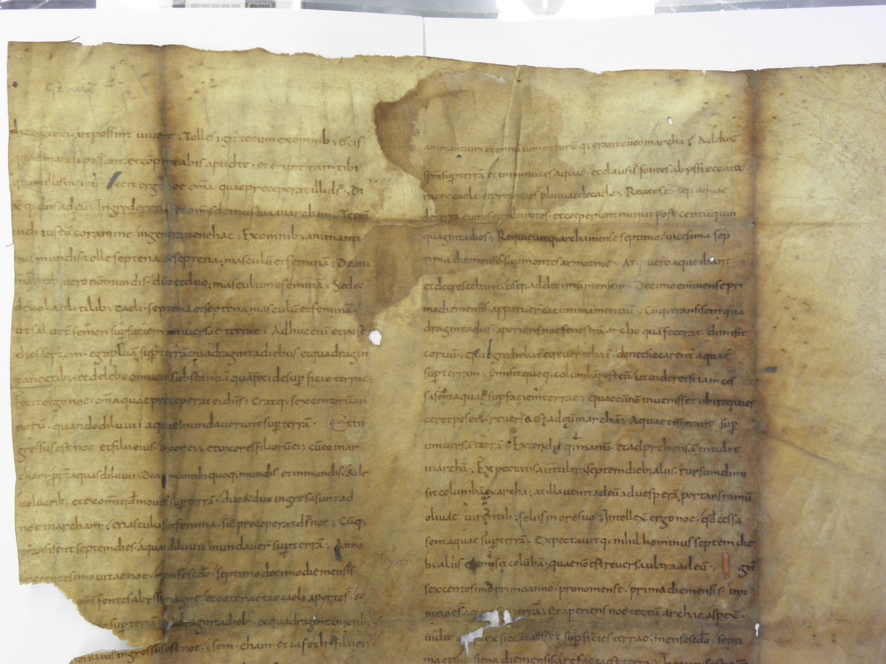 Also the Episcopal Archive and Library in Vic holds at least two 9th-century copies, already known to Bischoff, but mentioned by him without any indication of date and origin, so that one must assume a lack of information or even personal examination of them. The first is Vic, Arxiu i Biblioteca Episcopal, Ms. 166 (LXXII), a partial copy of Cassiodorus’s Historia ecclesiastica tripartita and other patristic texts from the last quarter of the 9th century, obviously belonging to the manuscripts imported from Narbonne or the Narbonnais when clerics from Septimania came to the Spanish March in order to restore the old episcopal see of Ausona (Vic) after 879/880. The other copy is Vic, Arxiu i Biblioteca Episcopal, Ms. 255, I, which Bischoff unprecisely describes as a Biblia, despite it only containing a single folium from Genesis (Figure 3). Again, Bischoff shows only an older state of the art which he could not revise. The folium belongs to a magnificent giant Carolingian Bible (or Heptateuch) also copied in the Narbonnais and obviously imported to the Cathedral of Vic at the time of its restoration. 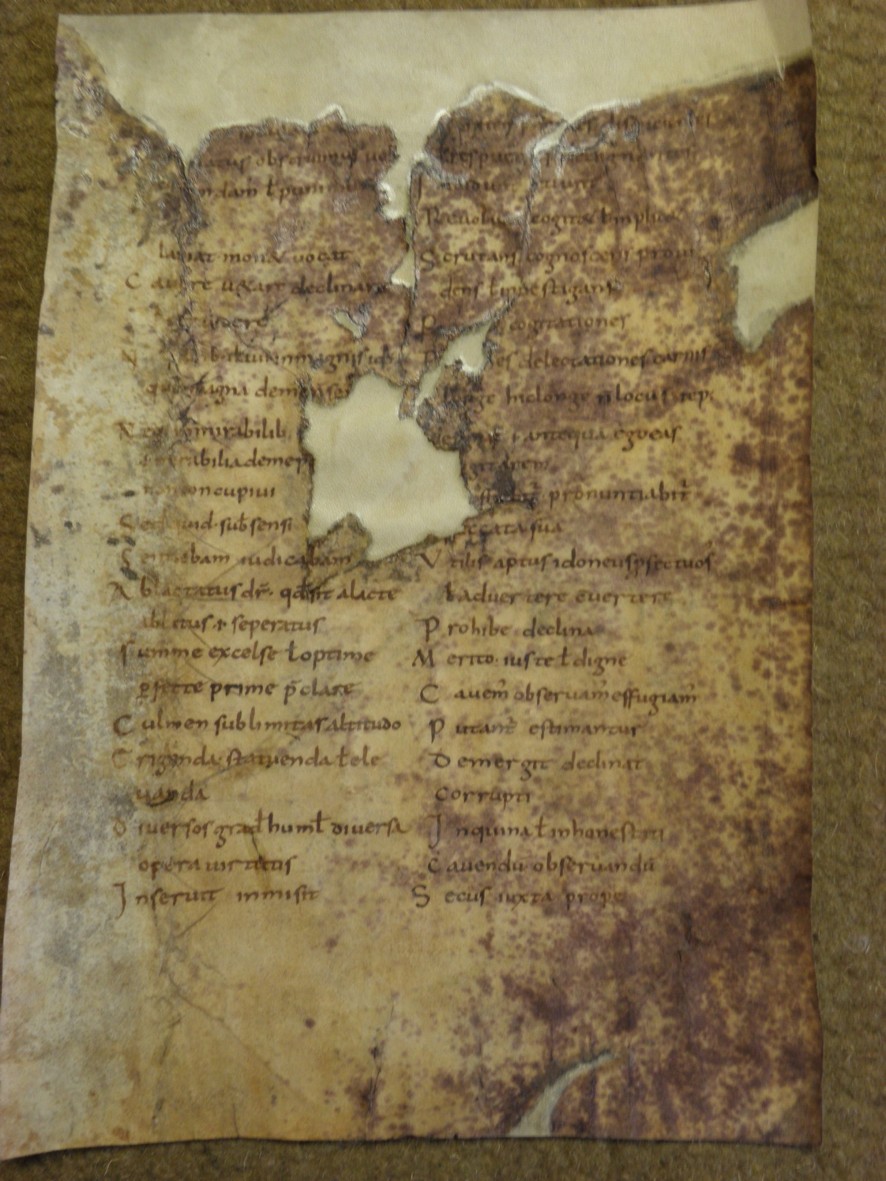 The other phenomenon is that we can add several items to Bischoff`s catalogue of 9th-century continental manuscripts, since research on the rich transmission of manuscripts and especially fragments in Catalonia was only intensified in the last quarter of the 20th century. I will mention here only two interesting examples. The first is a folium from a Glossary on the Rule from St. Benedict, today Barcelona, Arxiu Capitular, Còdex 120, fragment no 2 (Figure 4). Because of the palaeographical and codicological data and the text recension of the Rule commented here, we can assume a 9th-century copy from Septimania or the Spanish March.

The other item is Vic, Arxiu i Biblioteca Episcopal, Ms. 60 (LXXXVI), the Homiliary of an unknown Carolingian author for the morning office of the Sundays and most important feast days of the liturgical year. The manuscript is again the product of an unidentified scriptorium of the Narbonnais of the last quarter of the 9th century and thus seemingly also belongs to the first wave of manuscripts imported for the newly restored Vic Cathedral in late 9th century.

Following the bibliography of his publications and the panorama of his manuscript archive, Bernhard Bischoff was never focused on topics of the Carolingian text and manuscript transmission of the Spanish March or medieval Catalonia. This border region of Charlemagne’s Empire was a periphery for him; while it played a part in his Europe-wide panorama of the history of Latin script, it did not play any role in his many archival visits to the bigger and smaller European and American manuscript collections. A look into the record of his archival visits shows that he never carried out longer stays in Catalonia and that he was more focused on selected Spanish collections (León and Madrid). Whereas Catalan oral testimonies of short visits to the Montserrat and to Vic exist, the rich collections in Urgell, Barcelona, Tarragona and Tortosa appear to have remained untouched by him. One exception is his brief mention of the 11th-century Ripoll manuscript of Walahfrid Strabo’s De carminum generibus summa in Barcelona, Arxiu de la Corona d’Aragó, Ms. Ripoll 59, fol. 257r–258r. This remote detail is strange, given the rich Carolingian text tradition of Ripoll known since the studies accomplished by the Austrian librarian Rudolf Beer (1863–1912). 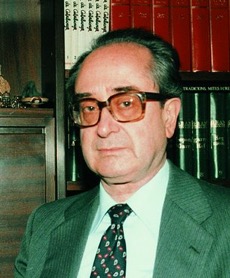 Finally, the question remains of what kind of relationship Bernhard Bischoff had with Catalan archivists, librarians and palaeographers, especially to Anscari Manuel Mundó i Marcet (Figure 5)? It is curious that we do not find any trace of the latter in Bischoff’s letter correspondence, but there are no letters or notes from his Spanish fellows in Palaeographical Studies, Agustín Millares Carlo (1893–1980) and Manuel Cecilio Díaz y Díaz (1924–2008), either. This perhaps reflects a certain isolation of Hispanic Medievalism in general and Manuscript Studies in particular within international Medieval Studies; the subject was renewed after World War II, but it remained affected by the political circumstances of 20th-century Spain. However, this does not mean that Bischoff did not know, read and use the valuable Spanish and Catalan publications, as one can especially see in his Paläographie des römischen Altertums und des abendländischen Mittelalters.

My short panorama shows that the transmission of Carolingian text culture in early medieval Catalonia is still a hidden treasure and is waiting for in-depth codicological and palaeographical research, after the first access given by the manifold studies by the French historian and expert of medieval Catalonia Michel Zimmermann (* 1937). The great task lies especially in the certainly painful but promising philological study of the manuscripts from the standpoint of written communication and knowledge transfer within a European network of Carolingian manuscript production. This would contribute to further define the already available reconstruction of a post-Carolingian Mediterranean society in transformation during the long 10th century. Ongoing comparative manuscript research and growing awareness of the specific early Carolingian minuscule in use in early medieval Catalonia will certainly uncover further Carolingian copies from the late 9th and early 10th centuries; some likely candidates are already identified in the collections from Ripoll and Vic which Bischoff obviously did not work through.