Although this fourth-century saint had become popular very early among the eastern Christians, in Western Europe St Alexius was the recipient of a wave of devotion only in the ninth and tenth century. From the ninth century onwards, different versions of his life spread in diverse religious communities from Spain to England. Around 1040 his Vita was even translated into vernacular Old French language, known as Chanson de saint Alexis. How can this wave of devotion be explained?

The expansion of the cult of St Alexius seems most obviously to have been due to the activities of popes in the tenth century. In 977 Sergios, an exiled bishop from Damascus, arrived in Rome. It is likely that he brought with him the legend and the veneration to St Alexius. Having received the church of St Boniface on the Aventine from Pope Benedict VII, Sergios created a monastery there. The second abbot of the monastery, Leon, then erected a church of St Alexius in 986. Since then, the saint became a second patron of the city. 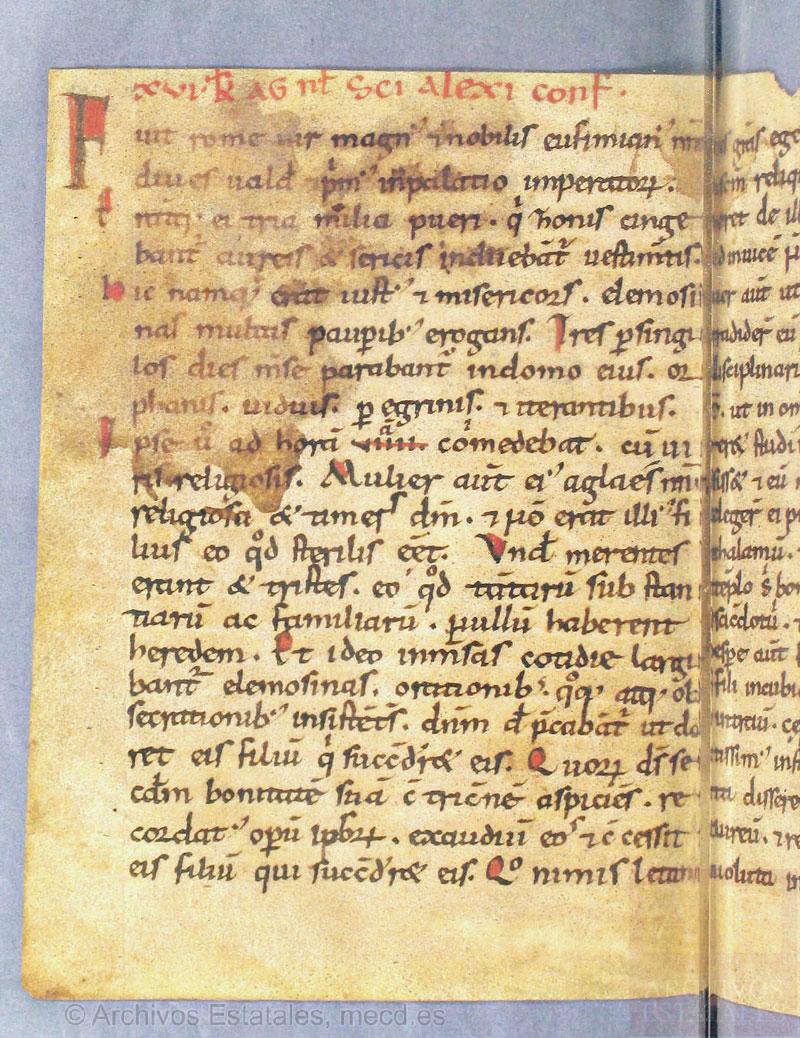 The example of the spreading veneration of St Alexius shows how the Roman church, anxious about losing control, used the cult of the saint, forgotten for centuries, in order to revive papal spiritual power. The legend of St Alexius thus became a text of Roman and papal propaganda that depicted the saint as a Roman, who was born, died and was buried in Rome, and his relics stemming from Saint-Boniface were Roman too. As for medieval memory, the indication of place plays an important role, the notices of St Alexius in calendars and martyrologies were quite often commenced with the words: “in Rome”, followed then by “natalis sancti Alexii confessoris”.

Therefore, Rome was one of the main forces disseminating St Alexius’s cult. However, in Western Europe another centre also participated in this phenomenon:  Northern Spain. It is exactly from these regions that the oldest occidental Latin version of Vita Alexii (BHL 289) was found. It is attested in four manuscripts of Castilian and Aragonese provenance copied in Visigoth script (from San Pedro de Cardeña, San Millán de la Cogolla and San Domingo de Silos). Apparently this prose vita, dated by the ninth century, shows that the legend circulated in a different form in Spain before it became known in Rome during the last quarter of the tenth century. The Roman vita, in turn, was composed in the monastery of St Boniface (of Tarse) between 985 and 1012.

Curiously, a recently-found Catalan copy of Vita Alexii belongs not to the Spanish, but to the Roman version. There are several variations of the Roman version, some of them having been written in Monte Cassino (BHL 287 and 290). But the Catalan one (BHL 286) is by far the most influential prose vita, being transmitted in more than one hundred manuscripts all over Europe. It is conserved within the codex 90 from the monastery Sant Cugat del Vallès that was compiled in the eleventh century. This miscellany, containing the treatise Diadema monachorum of Smaragde from St Michiel, the liturgical texts and two hagiographic lives Vita sancti Alexii confessoris and Vita sanctorum Victorini et Severini martires. Such co-existence of several genres of text in the same volume certainly indicates its use by the monastery, but also allows us to suppose that this use was not liturgical. Moreover, these two hagiographic insertions make us think about the importance of these cults as they were used within the monastery of Sant Cugat.

On the top of the page, over the first line of the text is written: “XVI Kalendas Augusti natalis sancti Alexii confessoris”. This dating, indicated so precisely, corresponds to references of the feast of St Alexius in Catalan martyrologies of the tenth/eleventh century from Girona, Vic and Sant Cugat. Of all these, the martyrology of Sant Cugat (eleventh century) is the only one where the mention “Eodem die Rome sancti Alexii confessoris” was not added later, but is presented within the body of text.

These are the earliest mentions of the veneration of St Alexius in the Catalan counties. He appeared in other religious centres at least a century later. The Archive of Tortosa conserves a number of manuscripts copied in Avignon, some of them mention the feast of St Alexius in 1150. Nonetheless, these manuscripts dated to the twelfth century probably arrived in Catalonia through the network of Augustinian monks between Saint-Ruf of Avignon and the Tortosa chapter, thus through other channels of religious communication.

The analysis of a number of sacramentaries from Southern France proves that the feast of St Alexius was not yet transmitted to Catalonia from Languedoc or Provence region in the eleventh century. At the same time, the martyrologies and calendars from Monte Cassino in the eleventh century mentioned the feast of St Alexius on the 17th July. It is also known that in 1023, Pope Benedict VIII (1012-1024) offered relics of St Alexius to this monastery. Thus, the Roman origin for the Catalan Vita Alexii as well as the liturgical testimonies of his veneration in Monte Cassino help to put forward a hypothesis that the cult of St Alexius came to Catalan counties from Rome, and not from the western Aragonese monasteries.

Scrupulously added into the Catalan martyrologies, the date of the 17th of July corresponds to the diffusion of the feast of St Alexius by the Latin Catholic church. This feast however was rarely indicated in other Catalan liturgical books of the eleventh and twelfth century. Possibly, the only one place with particular veneration of St Alexius was the monastery Sant Cugat del Vallès.

In conclusion, it seems that the Italian influence in transmitting the Alexius’s veneration was a product of papal politics. In the tenth and eleventh century, many Catalan abbots and bishops made trips and pilgrimages to Rome, seeking privileges for their religious institutions. Taking into account the political and religious significance of St Alexius as a new and important Roman saint – and even a new patron of Rome – the arrival of his cult in the Catalan region bears witness to the patronage connection between the papacy and the monastery of Sant Cugat. Still, research on further reasons for the Sant Cugat monastery’s veneration of St Alexius remains a work in process.