One of the genres of source that I’m closely working with as part of the After Empire project is genealogies. Genealogies are especially interesting texts both for the questions that this project is investigating and for my own research interests: how do people engage with the past? And how in particular do they engage with the memories of past dynasties that no longer exist? Part of my interest in genealogies has been sparked by how much this genre changes from the tenth century onwards. We have beautifully illustrated versions of the Ottonian and Salian dynasties in the thirteenth century, such as the Chronica Sancti Pantaleonis with individual roundels for each family member. In the twelfth-century, we also see MSS of Ekkehard of Aura’s Chronicon Universale with the heads of different members of the Carolingian dynasty set into architecture, holding banners signifying their descent between each other. 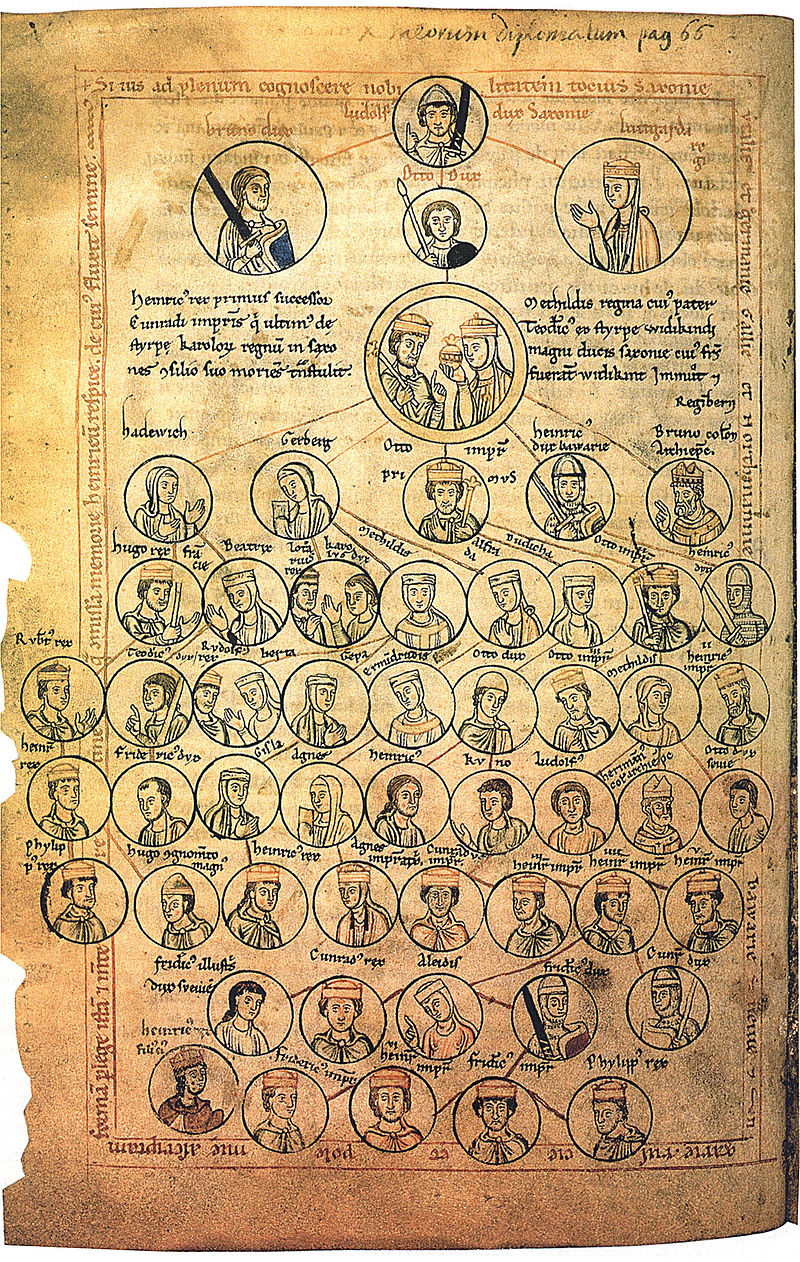 While these examples are often spectacularly illustrated they are a touch too late for the chronological scope of this project – these fully illustrated versions only really begin to appear from the late eleventh and early twelfth century. In the tenth and eleventh century, though, we are starting to see some of this visual representation appear. The eleventh-century Bamberg Table has small heads for the roundels of the emperors in the centre, and is surmounted with an illustration of St Arnulf complete with halo. But before the tenth century schematic diagrams of families or dynasties like this are rare. Instead, it is much more common to find a textual genealogy inserted into a manuscript tracing out the descent of kings or emperors: so, for example, ‘St Arnulf begat Ansigisus. Ansigisus begat Pippin, the mayor of the palace. Pippin begat Duke Charles. Duke Charles begat King Pippin. King Pippin begat the greatly renowned Charles, first king and then emperor of the Franks.’ 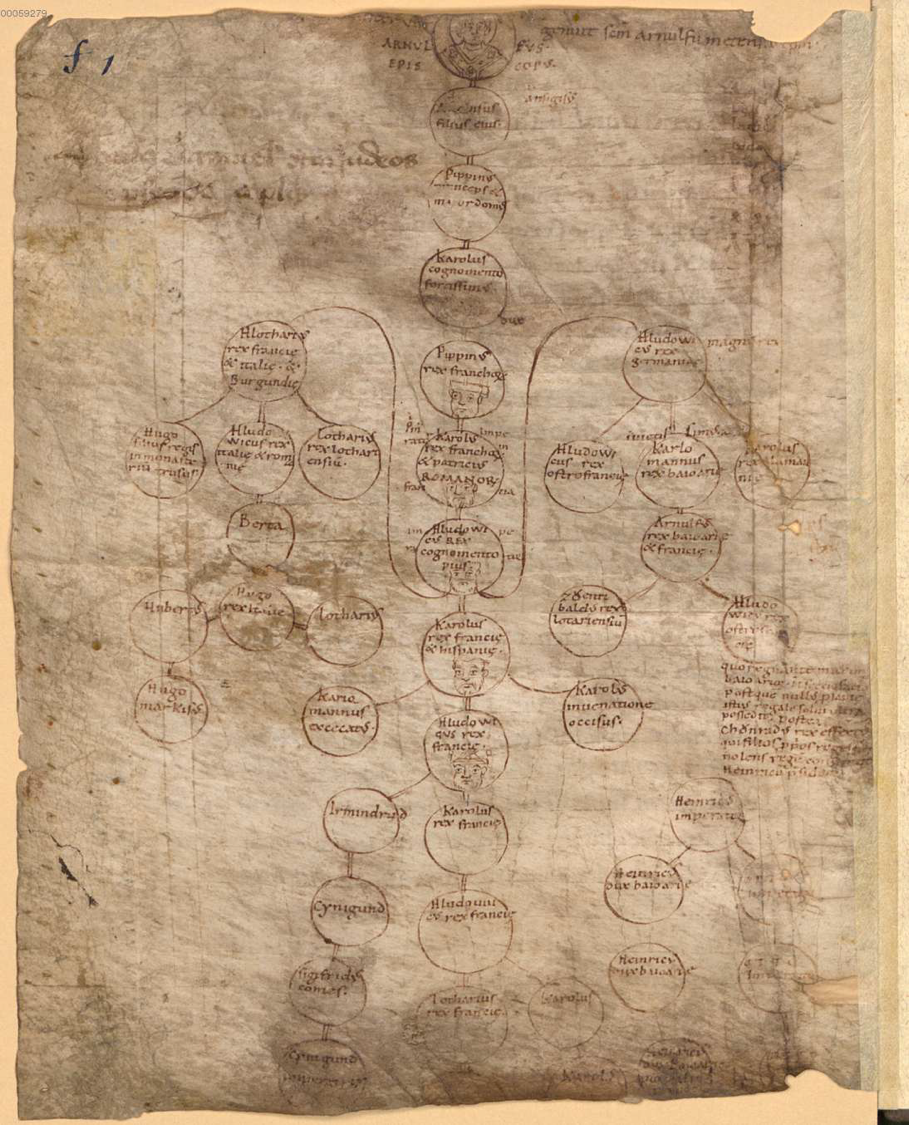 At the same time that we see the rise of these new visual diagrams of family trees, like the Bamberg table, there is an explosion of genealogical material in general. Genealogies begin to make their way into historical narratives with much greater regularity, often shaping how those histories were structured. We also see more genealogies, including those of non-royal families, begin to be written down and drawn out. There are a few possibilities for the growth of this genre of text in this period. It may be linked to the increasing concerns over consanguineous marriage and incest, linked to the prohibition against marriage to the seventh degree. Whereas Roman civil law had prohibited marriage within only four degrees, or four steps of descent, this was calculated by counting upwards from you to your common ancestor and then back downwards to your potential spouse; essentially, any relationships between parents and children (1 degree); siblings, or grandparents and grandchildren (2 degrees); aunts/uncles and nieces/nephews (3 degrees); or first cousins (4 degrees). In the early eleventh century, a much stricter definition was enforced: consanguinity was defined as anything within seven degrees, and the form of counting those degrees shifted too – now it was only counted one way, back to the common ancestor seven generations ago. From this point onwards, there was increasing concern about avoiding marriages within these numbers of degrees; you would need to make sure that you and your spouse don’t share any common ancestor from your parents all the way back to your great-great-great-great-grandparents. Unsurprisingly, this meant having clear records of your family became a much more pressing issue!

Perhaps as part of this increasingly widespread desire to track families and prevent incestuous marriages, we see numerous genealogies being created all the way through the tenth and eleventh century. Yet, genealogies were created or recopied for other reasons too. In particular, it seems there was an increasing level of concern about the legacy of the Carolingian dynasty after it was finally removed from the throne in West Francia in 987, and its final members fell into obscurity and died over the next few decades. Both the Capetian dynasty in the West and the Ottonian and Salian dynasties in the East either claimed that they were the true heirs of the Carolingian emperors, or they directly claimed Carolingian descent for themselves. As a result, the family tree of the Carolingians was being copied, recopied and reshaped all the way through the tenth and eleventh century, often in response to the arguments that the dynasties of this period were making about their share in the Carolingian legacy. Karl Schmid, for example, has tracked the various extant genealogical trees of the Carolingian family created in the tenth to twelfth centuries, and argued that the Bamberg Table and the Liber Aureus of Prüm were both copied from a now-lost tenth-century Stemma of the kings of Francia, most likely created at one of the tenth-century Carolingian West Frankish kings’ courts. Nora Gädeke has also argued that the Carolingian family tree in the twelfth-century Steinfeld Codex is most likely a copy of a version created at the court of the short-lived late-ninth/early-tenth-century King Louis the Child.

The work of historians on unpacking these Carolingian genealogies has shown how these diagrams can be read as an argument about the nature of the Carolingian family, the Carolingian dynasty, and how power was transferred between them over time. Though they may look like static representations, the decision of which line of descent is put where, how branches are arranged in relation to one another, and who is included and excluded from the family tree can reveal how the author conceived of the dynasty in question. The repeated copying of family trees of the Carolingian dynasty from the tenth century through to the twelfth shows us that the Carolingian past remained at the heart of present concerns; the family trees of past dynasties were just as valuable a source for discussions and arguments about power and legitimacy as those of present dynasties.