One of the most traumatic experiences of the ninth century, as Janet Nelson puts it, was the battle of Fontenoy, when the army of Charles the Bald and Louis the German met the troops of Lothar and of his nephew Pippin of Aquitaine on 25 June 841. The battle was significant in two respects: the heirs of Louis the Pious struggled against each other damaging the strength and reputation of the family, and a large number of Franks lost their lives on this day. Fontenoy  was and is considered to have been the most bloody battle in Carolingian times – Agnellus of Ravenna gives an exaggerated total of 40,000 killed men in Lothar’s and Pippin’s army alone. Immediate responses make clear how shocked participants and observers were. Two narratives about the battle written by participants provide us with vivid impressions about the course of the confrontation: a poem by Angilbert and a history by Nithard, who had fought on opposing sides. The battle was mentioned in near contemporary annals (Annales Bertiniani, Annales Fuldenses etc.) as well as in histories, both north and south of the Alps (Nithard, Agnellus of Ravenna etc.).

A hitherto neglected source is a sermon on the birth of Christ, most probably written in the 840s in Northern Italy. The preacher, who mainly concentrated on matters of his parish, stopped the exegesis on this feast day to comment on the affliction which overcame the community caused by the dissonantia regum. Far away from “Frankland”, conflicts between Carolingian kings were watched very closely, even at a decidedly local level. 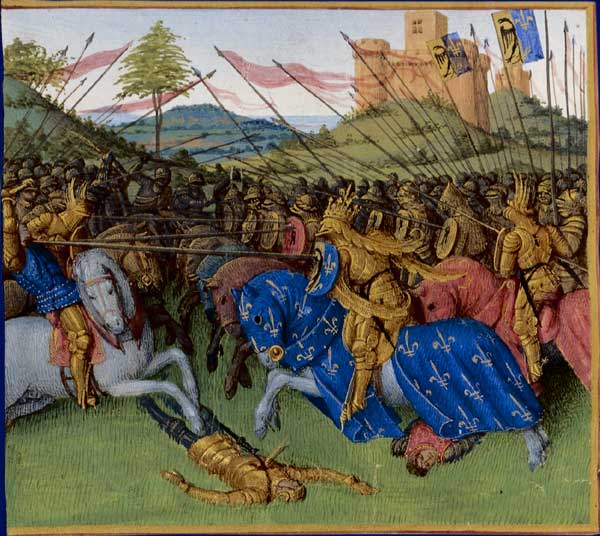 In this text the discord between the kings was set against the long lasting peace and harmony under the rule of the Roman emperor Augustus. The northern Italian sermon shows how the battle of Fontenoy had clearly shaken the order of the Frankish world, and how this bloodshed amongst the Franks got to the heart of the crisis of Carolingian rule. With the elites of the empire already divided between different factions, the battle provoked questions about the costs of this confrontation. To which larger social whole did members of the different factions feel they belonged: the empire, the gens Francorum, or something else? Many later texts also tried to deal with this issue. The Annals of Fulda, for instance, report a slaughter so great “that no one can recall a greater loss among the Frankish people in the present age.” (AF s.a. 841). Ado of Vienne got to the core of the crisis when he lamented that this was a slaughter between two parties which were neither distinct in their arms nor in their ways of life [habitus genti]. And in his Miracula sancti Filiberti (ca. 862) Ermentarius of Noirmoutier saw a relationship between the Carolingian dynasty and the health of his province and monastery. Indeed, he spends as much time complaining about infighting between competing Carolingian princes as Viking depredation of Noirmoutier. His explanation for the monks’ initial departure from Noirmoutier begins not with the arrival of the first Norse raiders, but with a description of the civil war between the quarrelsome sons of Louis the Pious. While he looks back on Emperor Louis with happy memory, Ermentarius blames Charles the Bald, Lothar, and Louis the German for the trouble that increasingly dogged Noirmoutier in the ninth century. Recounting the discordia that accompanied the division of the kingdom after Louis the Pious’ death in 840, Ermentarius describes in dramatic present tense (and with scant sympathy for either side) the “enmity that grows first between the brothers, then between their magnates. Younger brothers Louis and Charles rise up against their older brother Lothar and a horrible civil war erupts. Lothar cedes victory to his miserable junior siblings.” After these words the author lists a number of civitates, castella and monasteria which were destroyed by the Northmen due to the discordia of the kings. In a long passage he offers a panorama of devastation and despair culminating in a telling image, that there was almost nobody trying to stop those fleeing in saying “Stay, stay, resist, and fight for your fatherland, your liberty and your people!”[State, state, resistite, pugnate pro patria, liberis et gente!] Ermentarius thus forged a link beween the dissension within the Carolingian family and a more general weakening of bonds to the patria or gens. There might have been some truth to this connection. But blaming the aristocrats from Neustria for their lack of solidarity and courage was also a clever rhetorical instrument to get protection from the West Frankish court. In the same paragraph ‘glorious king Charles’ is mentioned who gave the monks of Noirmoutier shelter and rescue by donating new lands and the monastery at Cunault on the banks of the river Loire in 845. Already in 840 Ermentarius sent the first book of the Miracula sancti Filiberti to the imperial office-holder Hilduin to gain support at the court. In the early 860s he was still using this rhetoric once addressed to the imperial court. The sense of a ‘supra-regnal’ responsibility still existed.

40 years later the battle of Fontenoy was still identified as the main reason for the weakening of the power of the Franks. As Regino of Prüm remarks rather drily in his Chronicon under the year 841: “In this battle the power of the Franks was so diminished, and their famous manhood (virtus) so weakened, that thereafter they were incapable not only of expanding the kingdom, but also of defending its frontiers.” The death of Charles the Fat in 888 intensified the situation. Regino reports that wars had been aroused “not because there were lacking principes of the Franks who could rule the regna in nobility, fortitude and wisdom, but because the equality between them of birth, rank and power increased discord, for no one excelled the rest so far that they would deign to submit to his overlordship.” Charlemagne’s vision of empire had once been a guarantee of power balance and hierarchy. In Regino’s view the lack of an emperor caused political problems. It also had an effect on the ways that authors placed events in a larger context, as the next example will show.

In the first quarter of the tenth century bishop Radbod of Utrecht wrote a sermon on the Viking attacks on Tour in June 903. In this text Saint Martin was the broker between different groups within and outside of Tours. But first the community of Tours had to remind the saint that he has to protect them: “Behold, we are to be handed over to pagans and led away as captives … and you feign not to know these things. Have pity … you who once displayed so many signs for foreigners, do at least the same for your own, and free us.” In the end it was Martin who had saved Tours from ruin, instead of a king. In Radbod’s sermon the (Carolingian) rulers played no role as protectors of Tours: quite the contrary. When Carolingians are first mentioned in the text they testify to the disintegration of the realm, exemplified by the battle of Fontenoy. Concerning the appearance of the Normans Radbod argues: “For this was the result of the depredation by the aforementioned people, which, in the same year, they say, when four kings, progeny of the same father, delivering battles among themselves with their armies, polluted the plains of Fontenoy with much Christian blood, had entered the basin of the river Seine with their pirate-like fleet.” Carolingian failure immediately led to punishment. Only at the end of his sermon Radbod addresses the connection between Martin and the status regni Francorum: with the help of the saint the kingdom of the Franks would be always“feared, loved, venerated, and strengthened” and “the progeny of former Great Charles … would never expire” (prole Magni quondam Karoli nunquam deficiente). Although Radbod demonstrates his loyalty to the Carolingian order (perhaps because he spent a long time at the court of Charles the Bald and Louis the Child was king when he wrote these lines) his text shows that he had only limited faith in its effectiveness.

To demonstrate the effectiveness of Martin’s power Radbod places the saint in a wider imperial frame. He compares Martin’s miracles to the divine assistance for the Roman emperors Constantine and Theodosius, two emperors who had before, in Carolingian times, been used as models for Charlemagne and Louis the Pious. Moreover Martin’s corpse was more powerful than Alexander the Great, Xerxes and Augustus had once been. And there is much more imperial language. In Radbod’s mind Christianity rules the whole world, because the christiana religio had subdued a lot of kingdoms and defeated the most powerful kings. Therefore the religio should be called domina and imperatrix!

This is quite an interesting shift of imperial vocabulary from the Carolingians to Christianity in general and to St. Martin in particular. Charlemagne’s renovation of the Roman Empire in 800 had offered a wider horizon for political and social integration which gave more weight to Christian moral attitudes and identity than had been the case before. It was an effect of this reformed politics of identity, that within the empire the bonds between different groups with their rulers and with each other were increasingly defined by their common Christianity. At the center was the emperor, who styled himself almost as a preacher: this was true for Charlemagne around 800. At the beginning of the 10th century this central position of a political and moral authority was lost. The battle of Fontenoy was seen as the decisive moment in this respect. What remained was the need for stability, a vision of community which extended localism, especially when events with far reaching effects happened. For Radbod this was the christiana religio.

John B. Gillingham, ‘Fontenoy and after: pursuing enemies to death in France between the ninth and the eleventh centuries’, in: Frankland: the Franks and the World of the early Middle Ages. Essays in Honour of Dame Jinty Nelson, ed. Paul J. Fouracre/David Ganz (Manchester, 2008) 242-265.

Janet L. Nelson, ‘Violence in the Carolingian world and the ritualization of ninth-century warfare’, in: Violence and Society in the Early Medieval West, ed. Guy Halsall (Woodbridge, 1998) 90-107.