In the Carolingian period, general oaths of fidelity like those sworn under Charlemagne, Louis the Pious or Charles the Bald created a direct personal bond between the adult male free population and the Carolingian ruler and his family. This has always been taken as indicating a comparatively high degree of statehood, as the oaths had many political and legal implications, including performing military service in the great host, obeying the royal ban by which the capitularies were enacted, and acting as witness when interests of the fisc were dealt with in an inquest. However, on the same assumption, it has been questioned whether these oaths continued to be sworn in the 10th century under the rulers of the Ottonian dynasty in the Eastern Frankish kingdom. Most historiographic references seem indeed to point to oaths sworn by the royal vassals and the higher clerics alone, while the Ottonians apparently issued only a few new capitularies. For this reason, constitutional historians such as Walter Kienast have assumed that the Carolingian practice of having the whole adult male population swearing an oath of fidelity was abandoned in the later Carolingian or Ottonian period. It seems clear that behind such assumptions lie master narratives of a supposed ‘feudalization’ of the political order in the 10th century. However, while it can hardly be denied that the intermediate powers gained a strong position during the dissolution of Carolingian power, it is a different question whether this issue has to be directly linked to the practice of general oaths. It has been shown recently that even under Ottonian rule, fiscal inquest was practiced on certain occasions, while Ottonian warfare surely did not include vassals alone, particularly in defence against the Hungarians.

Looking at this issue from a later perspective, it becomes clear that under the third Salian ruler, Henry IV (1053/56‒1105), general oaths of loyalty must have mattered a great deal – otherwise Pope Gregory VII’s powerful political manœuvre to solve Henry’s subjects from the oaths they had sworn to him would not have made any sense. Moreover, this topic is so prominent in the “Streitschriften” of that time that it must have had a considerable impact that extended far beyond the relationship between the ruler and his ecclesiastical and lay magnates. Famously, when Bruno of Merseburg wrote on the Saxon War shortly after 1080, he stated that “without the observation of oaths the office of the royal dignity can by no means be administered” (Sine sacramentorum autem observatione regiae dignitatis officium nequaquam administrari potest). 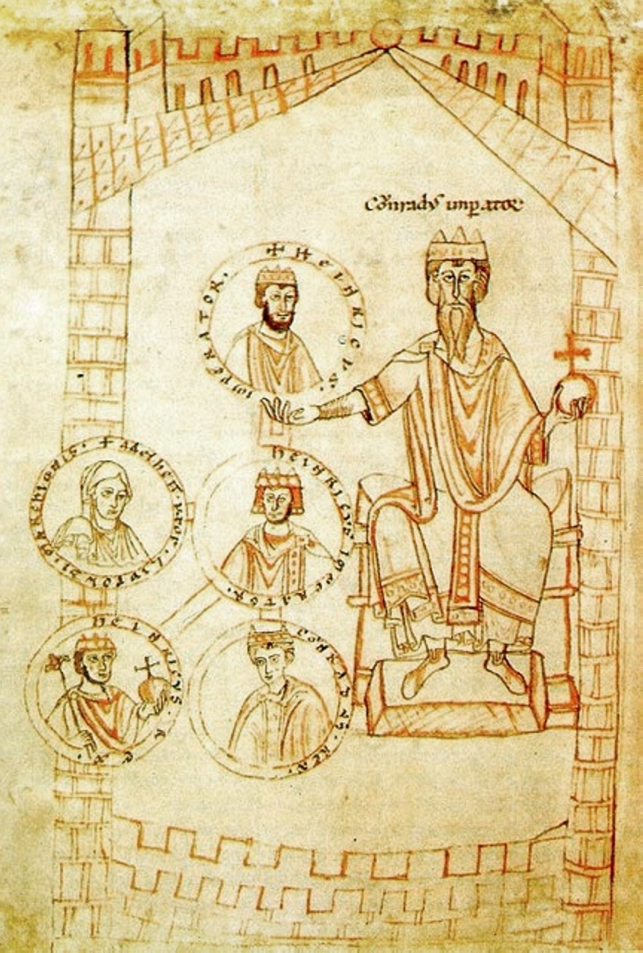 One may thus ask how far we can trace this practice back, and when the Carolingian practice of general oaths was taken up again (if it was ever abandoned). A suitable candidate for this would be Conrad II (1024‒1039), the first ruler from the Salian dynasty: there are, as discussed in a previous blog post, considerable and significant reminiscences of Carolingian oath practice found in Wipo’s Gesta Chuonradi. The main problem using Wipo’s work as a source is that it is almost impossible to separate how the Carolingian past mattered to the Salian king and how it mattered to his historian. Wipo deals with this issue for the first time when narrating the establishment of Conrad II’s rule as new king right after his election: “As regards the establishment of fidelity (De fidelitate facta) I think it is less necessary to mention this, as it is attested by frequent use that all bishops, dukes and the remaining princes, the soldiers of the first category, the gathered soldiers, even all free men, if they were of any importance, make fidelity towards their kings. But to him (Conrad) all submitted by their oath even more sincerely and voluntarily.” Although Wipo seeks to suggest some sort of universal consensus to Conrad’s rule and sees the obligation to swear loyalty extend to most freemen, there is some understatement in this passage, as he explicitly admits that he is only mentioning in passing the usual steps following the election of a new king. He thus refers to the established routine of a general oath of fidelity in monarchies, while only the second sentence refers specifically to Conrad. Following up, Wipo goes on to report Conrad’s first deeds and his circuit around the kingdom to have his rule accepted in all provinces of the kingdom.

One major difference between the Carolingian and the Salian oaths that becomes clear from this, is that Conrad apparently did not send out his missi throughout his kingdom to accept the oath on his behalf, as had been Carolingian practice. Instead, he received a personal oath from the important secular and ecclesiastical magnates and their troops at his election, while in the course of his circuit further oaths were sworn to him by local groups and also by delegates from Italy. However, that Wipo refers to the fidelitas facta only in passing thus does not mean that he did not regard the oath as a vital instrument, as he places emphasis on the fact that even most free men of a certain standing swore this oath. That Conrad indeed may have followed the Carolingian practice of oath-taking, becomes clear from a charter that reports a meeting held in Regensburg in 1027, where the king, among other things, carried out an inquisition procedure to pinpoint fiscal properties in Bavaria. For this purpose all Bavarian counts and selected judges were admonished by the oath sworn to the king (per sacramentum regale) to publicly testify when asked based on this very oath (eodem sacramento publice interrogati) what they knew about which possessions in their province belonged to the his throne (ad solium sui imperii iure pertinere). This is a clear hint to Carolingian oath practice, as we already find reference to the imperial oath in inquest procedures under Charlemagne in 802, as is frequently attested in general capitularies and local charters. It seems clear that Conrad II followed Carolingian models here, both in his order to register fiscal property and in reminding his functionaries of the oath of fidelity sworn to him on the occasion of his accession to the throne.

A second issue connected to this is the habit of swearing fidelity under reservation. Wipo showcases this feature in his account of a general meeting Conrad assembled in Ulm in 1027. Here, duke Ernst of Swabia, the stepson of Conrad whom Wipo portrays as an arrogant and disloyal rebel against the king, addresses his milites, reminding them of the oath-based fidelity they had promised to him and admonishing them not to leave him, but to preserve their honour instead; they should never forget that according to old tradition, the Swabians were famous for their good faith (bona fide) and their adherence to their lords; by staying loyal to him, they would earn benefits and for their descendents glory and honour. A reply to this made by two Swabian counts on behalf of the whole group is presented by Wipo in direct speech: “We cannot deny that we firmly promised you fidelity (fides) against all except the one, who has given us to you (contra omnes praeter eum, qui nos vobis dedit). If we were slaves (servi) of our king and emperor and manumitted by him to your right (iuri vestro mancipati), we would not be allowed to separate from you. However, since we are free (liberi sumus) and have our king and emperor as the highest protector (defensor) of our liberty (libertas) on earth, we would, as soon as we forsook him, lose our liberty (libertas), which no good man, as someone says, loses except together with his life. This being so, we will obey to you in everything honest and just that you will require from us. However, if you want something against this, we will frankly return to the place from where we have come to you conditionally (conditionaliter).”

The discourse on the interconnection of fidelity and liberty, which would eventually cause the duke to surrender unconditionally to the king, has of course many historical roots. Again the Carolingians’ insistence on liberty being the prerequisite of fidelity, which is so evident in the capitularies on the liberi hominesʼ obligation to swear, may have served as a model here; the provisions on the superiority of fidelity owed to the king may have also been included as a model. At the same time, the speech of the two counts apparently alludes to contemporary discussions on the inalienability of liberty which stressed the king’s ultimate responsibility for protecting all people of free status. Moreover, Conrad II issued an edict to protect the status of freemen as he also took care of the censuales, manumitted church dependents who were living under ecclesiastical patronage in the episcopal cities, being eager to have their status fixed by written law. To this one may add that we find such a notion of conditional fidelity (“Treuevorbehalt”) also expressed in contemporary charters.

The picture that emerges from this brief discussion is that one should not deal with issues such as oaths of loyalty by proceeding from general assumptions about the degree of statehood and feudalization that historians have been drawing for a long time. One of the main objectives of the HERA UNUP project is to question such master narratives and to ask instead as to what extent a certain awareness of the Carolingian past may be found in contemporary sources from the 10th and early 11th century. Interdependences between the more distant past and the immediate present thus call for a much more complex and nuanced approach to such ostensibly clear issues.